Getting lots of requests in e-mail to share my thoughts about now-former Mozilla CEO Brendan Eich resigning from the position after less than two weeks, in large part because of stakeholders being upset that Eich, in 2008, donated money to a successful initiative to ban same-sex marriages in California, which at the time were already legal.

All right. Some thoughts:

First, I think a lot of people are not entirely clear what the story is. One of the e-mails I got asked what I thought about Mr. Eich being fired for statements he made about same sex marriage in 2008. In fact, Mr. Eich was not fired, he resigned; the fomenting issue was not about statements he made, but a donation he gave for a political purpose.

Now, I recognize that the counter here is the suggestion that if Mr. Eich had not resigned he would have been fired, and that (if you’re the Supreme Court, at least) it’s looking more and more like donations are statements, etc. Nevertheless, for now, let’s say that when we have actual facts, we go with the actual facts. The actual facts are: Mr. Eich resigned, and it was his donation to support California’s Proposition 8 in 2008 that got this particular ball rolling.

Second, let’s recognize that Mozilla is in itself an unusual place, and the specific characteristics of that organization, of the things it creates, and of the community of developers it works with, has quite a lot to do with events as they unfolded (see this useful NY Times piece for further if brief elucidation). We should acknowledge this, and recognize that because of this, Mozilla may or may not be a good candidate for a wider prognostication of “what it all means.” In other words, no matter what your position, don’t freak out yet.

With those out of the way:

So, the board of a private company appoints someone as CEO, many of the stakeholders of the company (employees, outside developers, companies whose products are accessed by the other company’s products) object and decide to act in their own personal or private capacity to complain and/or boycott, and ultimately as a result — and without governmental intervention at any level — the CEO decides his presence in the position is not in the interest of the success and welfare of the private company and chooses to resign.

I mean, isn’t this supposed to be how things work? Decisions made, a frank exchange of viewpoints by legitimately interested parties, choices selected with an eye toward the bottom line good of the company, and actions voluntarily taken by the person and people affected? With no governmental interference in any way? Is this not the very soul of laissez-faire capitalism?

But, but… Mr. Eich should be free to believe what he wants, and to contribute to any political cause he so chooses! Well, and so he is, and I would, as they say, defend to the death his right to do so. What he is not free from — and this is the thing which people seem to fall down on again and again — are the consequences of his actions. When you’re the CEO of a corporation where a large number of your stakeholders support same sex marriage, either for personal or professional reasons, your choice in the past to offer support to make such (at the time legal) marriages illegal is a legitimate issue for discussion. Additionally, your further choice not to speak on your current personal thoughts on the topic (whether or not you pledge your company to openness and diversity) is also a legitimate issue for discussion. If a CEO is not willing to accept that there are consequences to his or her past and current actions, they should not be a CEO. Being a CEO is fundamentally about there being consequences to your actions.

Let us posit another company. This company features stakeholders — employees, board members, vendors, users of the company’s product — who fervently believe the Second Amendment to the Bill of Rights means that one should be able to buy and own any particular type of firearm one would choose to possess. Let’s say the board of this company hires a new CEO, even thought they know that CEO at one point in the not terribly distant past contributed money to make handgun ownership illegal in the city or state the company resides.

This doesn’t sit well with the stakeholders and they complain and some announce they will no longer support the company. The CEO responds by saying that his own personal beliefs will not keep the company from acting in a way consistent to the law as regards handguns, but refuses to comment on how — or indeed if — his beliefs regarding handgun ownership have changed.

Are stakeholders not right to be concerned that the CEO’s refusal to further elucidate their personal opinion will not directly affect the company and the company stakeholders? Would it not be reasonable thing to worry that the CEO’s past and present action might make it difficult to recruit new employees and vendors, most of whom in the relevant business sector having a clear and certain view regarding handguns and the Second Amendment — and one that opposes the CEO’s known actions? And if the CEO ultimately decides to depart from the position rather than to threaten his company’s standing in the field, would not this be seen as the correct thing for him to decide to do?

And also: Would it not be, again, the very soul of laissez-faire capitalism? That the issue was raised, discussed, taken action upon and dealt with, all within the scope of the company and its stakeholders, quickly and without intervention in any way by the government?

I think you may guess my answers to these all questions.

Regarding Brendan Eich himself: My understanding (which may be incorrect) was that he was initially reluctant to be considered as a CEO candidate. If that’s the case he probably wishes that he had followed that first impulse, as then he would still be CTO of Mozilla and any controversy about his 2008 donation regarding that position (as there was, by all indication) already baked in and dealt with. I think it’s clear that both he and the board underestimated the pushback from stakeholders about the donation and how it would affect Eich as CEO. I don’t know that it’s something they could have known until he was in the position. It’s something they know now, with regard to whom the next CEO may be. 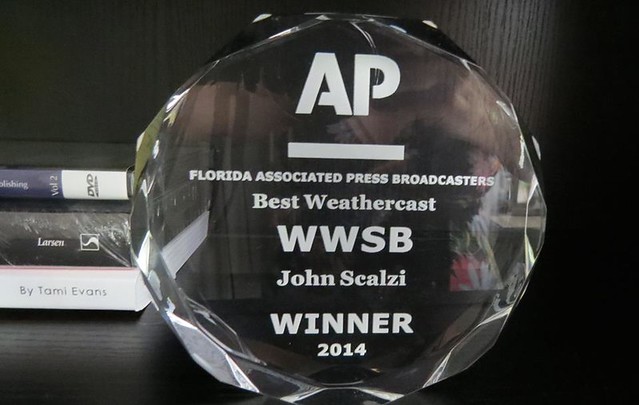 No, I haven’t started a sideline business for when my writing career craters under me. There’s a John Scalzi (no relation, or at least no relation that doesn’t go back several generations), who works as a meteorologist for WWSB down in Sarasota, Florida, and he just won the “Best Weathercast” award from the Florida Associated Press Broadcasters. So that’s excellent for him! As I noted when I congratulated him on his Facebook fan page, the name “John Scalzi” always looks good on an award.

One day the two of us will meet and it will be confusing but fun for everyone involved.