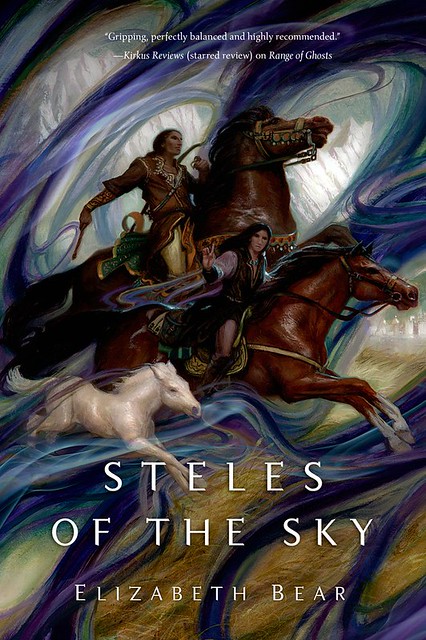 Two things you need to know for today’s Big Idea: One, Elizabeth Bear is one of this generation’s best science fiction and fantasy authors, and Steles of the Sky is the latest in her acclaimed Eternal Sky series; Two, there’s a really big and awesome announcement in this Big Idea. Okay? Here you go, then:

Stop me if you’ve heard this one before.

So there’s this guy, right? And he’s the youngest son of a branch of the royal family, but his older brother, the heir-apparent, is killed in battle with another branch of the line, and he nearly dies himself–

…okay, I’m yanking your chain. That’s not the Big Idea here. That all actually happened before the beginning of the first book, Range of Ghosts, which I Big Ideaed about here.

Yes, it’s a pretty traditional setup. But I just might have gotten lucky and done something interesting with it this time.

Today, though–today I’m here to talk about the third and final book in the trilogy*, Steles of the Sky, which releases today.

The Big Idea here is… well, there are a lot of them. Humanoid tigers with an esoteric religion; occasional megafauna (possibly the name of our illustrious host’s next band); the unreliability of history (which is generally being written by a lot of different people with different agendas over the course of centuries); all the things women actually did in the premodern era…

Every so often we hear the excuse that women have no place in epic fantasy stories because medieval women didn’t actually do anything. They were simply fungible objects, pumping out babies and keeping house.

Even if one were to ignore the exceptional women of history–the Hypatias and Hatshepsuts and Hildegards, the Eleanors and Aethelflaeds and Nzinga Mbandes, the Ching Shihs and Khutuluns and Tomoe Gozens–the women who, more or less, took on roles usually identified as masculine–one is left with women who spun, who wove, who ran households, who served as the supply chain managers for their male relatives’ armies, who participated in their husbands’ businesses and explorations–or took them over, after those husbands died–who, in general, performed enormous amounts of unpaid labor on their families’ behalves and got absolutely no credit for it.

Tycho Brahe said of his sister, Sophie Brahe Thott, that she had as fine a mind as any man. She’s worth reading about. She is very far from alone.

These women are often erased in history. They took their husbands’ names. They lived in societies that believed the only time a woman’s name should be recorded was when she was born, got married, gave birth, or died.

And they are often erased in literature, as well.

(It’s interesting to me that at least one review of Steles of the Sky so far has said that every major character other than the protagonist is female. This is not actually true–the points of view are about equally divided between women and men) but it does go to show that if you start approaching parity, people think the women are taking over.)

Even in modern fantasy literature, where we ought to know better. Where we have the scholarship and the knowledge of history not to erase the accomplishments of historical women by treating each and every one as an exception, a lone thing, and not part of a tradition.

Capable women are not the exception. But women who have managed to make such nuisances of themselves that they cannot entirely be erased from history–they are harder to find.

So I wanted to talk about some of those accomplishments. I wanted to show some epic women who were not warriors, not fireball-throwing sorcerers, and who still managed to have an impact. (There are some warriors and sorcerers too, of course.)

I wanted to remind myself, as a writer and a human being, that capable women are not the exception in history. That they should not be in literature, either.

Also, if awesome women aren’t enough for you, this book has an amazing Donato cover, and an equally amazing Ellisa Mitchell map.

*And–here’s the even bigger idea! (and way to bury the lede, Bear!), but I have an announcement to make.

There are going to be more Eternal Sky books!

While Range of Ghosts, Shattered Pillars, and Steles of the Sky comprise a complete story arc in and of themselves, I can now reveal that Tor will be publishing at least three more books in this world. We came to an agreement late last month, and I can tell you this–here, exclusively:

This second trilogy, The Lotus Kingdoms, will follow the adventures of two mismatched mercenaries–a metal automaton and a masterless swordsman–who become embroiled in the deadly interkingdom and interfamilial politics in a sweltering tropical land.