Question in e-mail today asks, of my book The Human Division: “What’s up with every one of the side characters being women?”

My first thought was: Huh, a reader finally e-mailed about that.

My second thought was: Huh, it took a year and a half before a reader e-mailed about that.

My third thought is: In fact, not every side (or featured) character in The Human Division is a woman. If you were to take a pencil and write down the name of every named character, you’d probably discover that roughly half of the named characters are women.

I did consciously decide to include women characters roughly at parity to male characters, for two reasons. One, in the Old Man’s War universe, there’s no reason not to — thanks to genetic engineering and social attitudes (and other things), the OMW universe is one where there is no reason not to have parity between the sexes in the events related in the books. Since there’s not, introducing a disparity would be inauthentic to the universe I created.

Two, regardless of the world I created, we live in a world in which women are underrepresented in the media, relative to the numbers they exist in the real world. I also think that’s inauthentic, and I don’t see why I would want to be a part of that. So, unless there is a compelling reason not to (see: The God Engines, in which the lack of representation of women is there as a tell about the culture), I’ve decided in general to replicate the parity of the sexes that exists in the real world into my fiction.

I didn’t make a huge deal about it when I was writing THD; I just reminded myself to write women characters. I also didn’t generally talk about making an effort at that parity after the book was published, because I didn’t think something as simple as accurately representing male/female ratios in the real world (and how they would logically be in the universe I created) was a big deal.

I was curious if anyone would notice. I think there was one review that noted it (in passing, not as a central feature), I was asked about it in one interview, and now I’ve gotten this one e-mail about it from a reader. And pretty much that’s it.

What does that mean? Well, you tell me. I like to think that generally speaking it means that people who read my books don’t think it’s a big deal that women are at parity to men in terms of characters. I’m good with that.

To those who do notice and think it’s weird or indicative of some political agenda they feel suspicious about: Meh, get used to it. It’s not going away anytime soon. 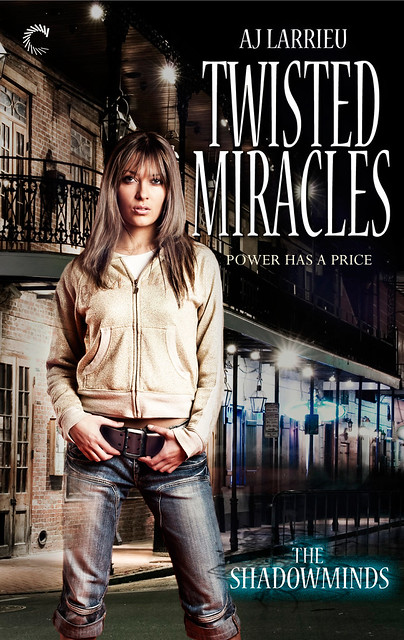 Things have a cost. You buy a coffee, you pay the price for it. You stay up all night drinking, you pay for it with a hangover. But what cost comes from using magic — and how do you pay the price? A.J Larrieu is here to tell you how tallied the cost for her novel Twisted Miracles — and how that price affects her story.

I’ve always been drawn to speculative fiction that requires power to have a price. The price can come in different forms, but without it, the world just won’t feel real. In the Harry Potter books, one price of power is the training witches and wizards need to harness their innate abilities. In the Game of Thrones series, no one gets away without paying the “iron price,” and often paying more than they owe. Giving power a price creates natural balance in a fictional universe—and it makes things a lot more interesting.

The world of my debut novel, Twisted Miracles, is populated by shadowminds, humans with supernatural mental powers. They aren’t strictly telekinetic—they’re actually energy converters, able to use their minds to create motion, light or heat. This makes for some fascinating possibilities, but I knew I couldn’t let their powers be limitless. To make their gifts feel real, I had to understand how they worked. Not on a detailed level—it’s made-up magic, after all—but in a practical way. What’s possible, and what’s not?

I’m a scientist by training, so I began with one of the most fundamental, unbreakable laws of the universe, the First Law of Thermodynamics. It’s a famous one—simply put, it states that energy cannot be created or destroyed. As I move my fingers to type this post, I’m using energy I banked this morning in the form of peanut butter on toast and some disappointing strawberries.

Of course, some of them can go beyond those limits. My heroine, Cass, can lift anything she wants, no matter how heavy, but that energy still has to come from somewhere. If she can’t find it in herself, her gift goes looking for it somewhere else, and the cost of stealing energy isn’t always one she’s prepared to pay.

It was this cost that led me to the thematic core of the story, the one I didn’t know about when I started writing. As it turns out, the big idea behind Twisted Miracles is a question: What are the limits of forgiveness? Cass’s dangerous gift has led her to do terrible things, some of them by accident, some of them not. Over the course of the story, she’s forced to make soul-rending choices about the price she’s willing to pay for justice. In the end, Cass’s journey is about learning how to live with her personal tab of decisions and mistakes—and learning that forgiveness might be the one thing in life without a price.