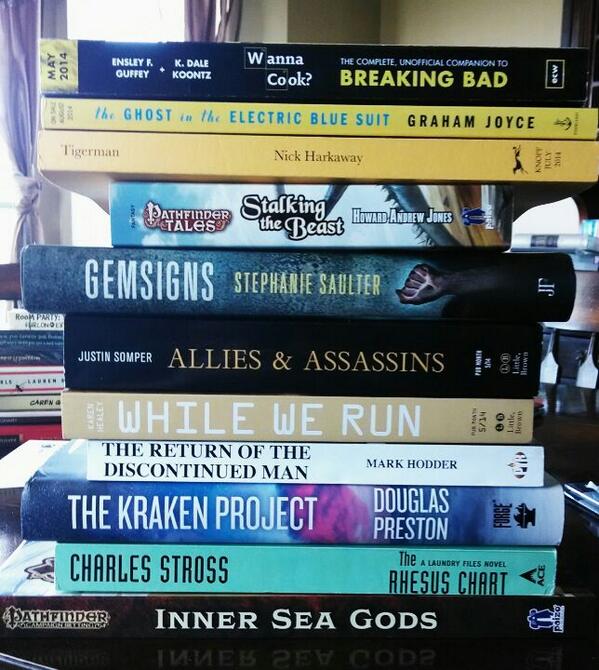 Some lovely books and ARCs in this stack — and now I want to know which look desirable to you. Share in the comments! 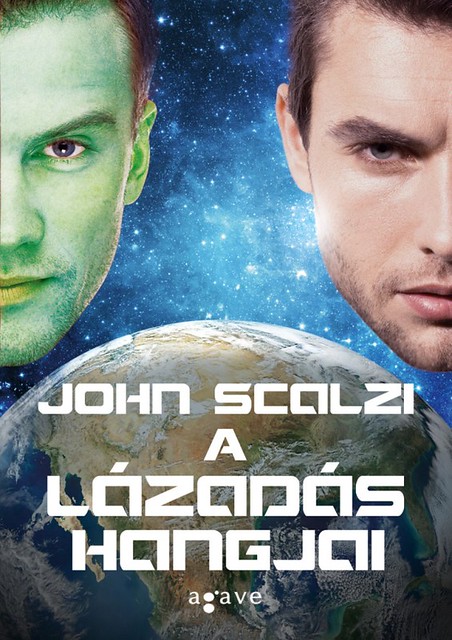 Keeping once again in the basic template established for the OMW books by the publisher. I am assuming that these two gentlemen are Harry Wilson and Hart Schmidt. In which case, they’re kinda more dreamy than I imagined them. Which is fine!

I’ve been talking about sexism recently — my own and others — and I have to say I’ve found it increasingly exasperating to see the massively defensive response of “not all men are sexist” that inevitably follows. One, because it’s wrong (more on that in a bit), and two, because the more I see it, the more it’s obvious that it’s a derail, as in, “Holy shit any discussion of sexism makes me uncomfortable so I want to make it clear I am not sexist so I’ll just demand recognition that not all men are sexist so I can be lumped in with those men who are not sexist and I can be okay with myself.”

(I also note a fair correlation between the men who demand acknowledgment that men are not all sexist and the men who show some general hostility either to women or to the idea that they are being actively sexist through their own words or actions. But then, I don’t really find this correlation all that surprising.)

And, well. No. In fact, you don’t actively have to go out of your way to discriminate in order to participate in discrimination — that’s kind of the point. Some of that is already built into the system that everyone is part of. You get it, positively and/or negatively, no matter what; everyone does. You may then also decide to support discrimination in one way or another, and that’s the thing that changes you from being (for example) sexist to being a sexist. But to deny that baseline discrimination we all deal with because you’re not by your own lights actively trying to promote that discrimination is silly. It’s there, it’s real and it’s measurable, and you take part in it, one way or another.

But where does the line get drawn between being [x]ist and being an [x]ist, as it were? Let me posit what I think are four (very) general states of discrimination, as a way to suss out my own thoughts on the matter.

(And here is where I add the following disclaimers: One, these are my own thoughts, not rigorous research. Two, people who routinely and rigorously study discrimination may find this delightfully naive. Three, I acknowledge that the following framework is both very general, simplified and “chunky,” as in, reality is a great deal more subtle than four easy-to-conceptualize levels. Four, this is a work in progress. Got it? Okay, then:)

So, here are four basic levels of discrimination as I see them, each building on from the other, each with generally increasing negative effect on those discriminated against:

Level One: Ambient — This is the discrimination that is given to you, by society in general, by the particular groups you participate with in our general society, and by immediate influences (i.e., family, friends, teachers and authority figures). Your own ambient mix of discriminatory things will vary due to all of the above, as you drill down from the general to the specifics of your own life. But that doesn’t mean you avoid discrimination (or its effects); it merely dials in what particular discriminatory things you are more strongly influenced by. Everyone is influenced by the ambient discrimination, which is why, in fact, everyone is sexist, racist, classist, etc — we all got given this stuff early, often and before we could think about it critically. This is the baggage we deal with.

Level Two: Advantageous — This is the level where you realize that sometimes discrimination works for you, and you take advantage of it… or at least, are willing uncritically to accept the benefits of it. You may or may not wish to acknowledge that you have these certain advantages, and when you do acknowledge it, you may or may not try to assert that those advantages don’t apply to you specifically, i.e., that you didn’t get an automatic benefit due to discrimination and instead what benefit you’ve accrued is due to something intentional about you (“No one ever gave me anything! I worked for it all!”). But your recognition and acceptance of this advantageous discrimination is neither here nor there about a) whether it works for you, b) whether by participating in it, you’re helping to reinforce that discrimination.

Level Three: Argumentative — This is the level where you take on board the idea that discrimination is desirable in some way (usually in a way that benefits you directly, or benefits a group you belong to, so you accrue general and indirect benefits), and as a result you argue for and/or defend discrimination. This can take on a number of forms, from the relatively benign (the “not all…” argument) to the not at all benign (arguing that being a slave in the US was not so bad, or that women aren’t mentally composed to do math or physics or computer programming, or that Muslims are naturally inclined toward violence, as examples), and the use of rhetorical process to drive a discussion of discrimination either away from recognition of discrimination, or toward a different topic in order to control and contain the discussion.

Level Four: Antagonistic — The level where you choose to actively set yourself against others due to their differences from you, by (as examples and not limited to) acting to obtain or calling for limits to their freedoms (or to maintain current, actively discriminatory practices), actively minimizing their participation in society, either in general or in a specific subset, threatening them by word or by action and/or encouraging others to do the same.

So: I am sexist in that I have a raft of general assumptions and expectations about women and men that I got just from living in the world that I do; some things seem “girly” and “womanly” to me while some other things seem “boyish” and “manly.” But I am willing to argue that I am probably not a sexist, because I don’t, for example, believe that men have inherent rights and privileges that women should not, nor do I believe women’s roles are lesser or subservient to men’s, nor do I, say, threaten them with rape or violence when they say or do something I dislike.

But of course that’s an easy formulation, isn’t it. We don’t really do or say anything useful if we only acknowledge the most extreme examples of discrimination as evidence that someone is a bigot in one way or another. This is part and parcel of the “not all…” assertion — one, that the ambient discrimination in the world doesn’t count when considering someone’s discriminatory assumptions and behavior, and two, that somewhere along the way, there’s a big, bright line at which one can say “hey, now you’re being a sexist/racist/homophobe/whatever.”

And, you know, I don’t think it works that way. Ambient discrimination makes us discriminatory. We all do it; we’re all that way because that’s what we get all around us. What makes us not a sexist, or a racist, or a homophobe, or whatever, is what we choose to do when we recognize our discriminatory behaviors or attitudes (or have them pointed out by others). If you work to minimize them going forward, in yourself and in your larger world, then you’re probably not a sexist/racist/homophobe/whatever. If you sort of shrug, and go, yeah, well, that’s life, then, yes. You’re totally a sexist/racist/homophobe/whatever. You don’t have to wait to claim that title, or have it justifiably applied to you.

(And yes, before the angry straight white male brigade descends, this applies to everyone, not just straight white men. If you’re not aware of it already, please bone up on the concept of intersectionality. But let’s also not pretend that straight white dudes aren’t first among equals when it comes to these issues, please. You all know my thoughts on my own social group by now.)

So. Am I, John Scalzi, sexist, and racist, and other forms of discriminatory? Yup. That stuff got built in, mostly when I was young and/or wasn’t paying attention. It happened to you, too. Sorry. But I also try to work against being a sexist, and a racist and other such things, by seeing those things in myself and working to correct them, and to correct them outside of myself as well. Am I work in progress? Yes. I’m not perfect at it, either. I show my ass from time to time. But I’m happy to keep on progressing. It’s a lifetime effort.

What I hope is that because of that effort, the ambient discrimination that people will get born into and participate in will suck less in the future than it does now. That’s what I can do, and what you can do, too.