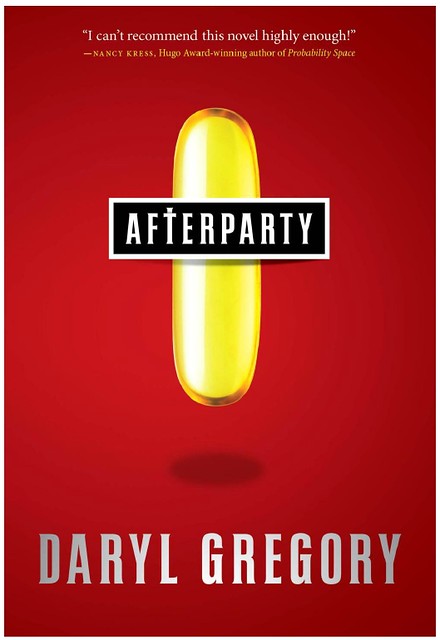 Your brain: Is it your friend? Or is it something else entirely — something maybe a little less chummy with you than you thought? Ask Daryl Gregory, because he’s given it some thought (with his brain!!!!) for his newest novel, Afterparty.

Your brain is lying to you. Not just about the small stuff, like when it makes you fall for an optical illusion, messes with your sense of time, or creates a gorilla-size gap in your perception when it’s busy concentrating on something else.

Your brain is also lying about the big stuff, the most fundamental aspects of being human. It starts with the illusion that there’s a “you” behind your eyes, and independent “self” that has something called free will. Folks like Daniel Dennett argue that free will is just a feeling of control. And Dan Ariely, the guy who wrote Predictably Irrational, can supply plenty of examples of how our “rational” decision-making can be shaped by things as simple as changing the design of a form at the DMV.

But evolution has also shaped our brains to affect the way we make moral decisions. Consider the well-known thought experiment, the Trolley Problem. A runaway trolley is coming down the track toward five people. You can pull a lever to divert the trolley onto another track, where a single person is standing. Do you kill one person to save five?

The answers people give can vary simply by the story you tell about the singleton who would die. Is he a fat man you’d have to push onto the track yourself,  a villain who “deserves it,” or an unsuspecting guy sleeping in his hammock? Because we evolved as social apes, some actions just feel more wrong, even if the moral calculus is the same.

Your brain, basically, is Mr. Liar McLiarpants. And that’s the big idea behind Afterparty.

The story takes place in the very near future. (If you want to write about the present in a way that won’t feel quaint in ten minutes, write near-future SF. It’s just mainstream fiction with the sell-by date scraped off.)  To show what life is like a few years into the designer-drug revolution, I made up a few technologies that are pretty much doable now, chief among them the ChemJet.

Here’s how you build one. Take something like a 3D printer. Replace the input material with packets of pre-cursor chemicals (phenethylamine’s a good building block) that you buy semi-legally online. Next download recipes for smart drugs from a vibrant community of bio-hackers. Or make your own, and beta test the results on you and your friends.

Obviously there are going to be some interesting consequences of desktop drug design, some of them horrible.

Lyda Rose, the main character in the book, is a good example of both sides of that bio-hacking coin. She’s a former neuroscientist who discovers that the drug she helped create ten years ago, and thought she buried, is back on the streets, being printed by underground churches.

The drug goes by the name Numinous, and for good reason. Take a little, and you get that mystical feeling that William James described in The Varieties of Religious Experience, and that’s been experienced by humans throughout history. (Some people with temporal lobe epilepsy have it every day.) It has many qualities, but the main one is that you feel like you’re in contact with something wholly outside your self—a divine other.

That’s what happens if you take a little Numinous. Overdose on the drug, however, and you might wake up with a deity permanently installed in your brain—your own personal Jesus.

Ten years before the story starts, Lyda and the co-creators were all given a massive dose of Numinous against their will. (Who did that to them, and why, is one of the mysteries in the book.) Each of the survivors now has their own “divine” presence living with them, and Lyda’s is Dr. Gloria, an angel in a white lab coat. Lyda, as a scientist, knows that Dr. Gloria’s a hallucination. But the other side of the coin is that the good doctor is also good for her; Lyda’s a better person when Gloria is advising her and soothing her.

That’s the main question the book asks: if someone invented a drug that made you technically insane, but helped you to be kinder and more connected to your fellow humans, would you take it? And what happens when other people decide they should convert you for your own good?

If you don’t want to wait for the future to get your dose of chemical evangelism, you can always take the long road. Every day, millions of people meditate, pray, sing whirl, and chant, chasing that feeling of the numinous. Whether it’s God (or some other higher power) communicating with them, or whether it’s just the brain fooling them with its own recipe of chemicals, that’s a question that each person—and his or her brain—has to work out for themselves.

As for me, I trust my brain about as far as I can throw it. (Which isn’t far, because skull.) But I think of it as living with a charming sociopath. Some of the stories it tells become more interesting when you know they’re lies.