Because you want to know them. Yes you do.

1. My pal Helen Montgomery wanted me to make you all aware of the following, relating to Worldcon, live theater at the Worldcon, and how you (yes, you!) can help make it happen. I am going to quote Helen directly:

“I really appreciate you being willing to help promote what is the centerpiece of my ‘West End’ theme of theater at Loncon 3: the world premiere of an adaptation of The Anubis Gates, by Tim Powers. The adaptor and director is a woman named Ruth Pe Palileo, and the company is called Current Theatrics. I think I mentioned to you this weekend that Ruth is one of the people who did the Neil Gaiman plays at Chicon, and she’s done some work at Capricon as well.

“Current Theatrics is starting a crowdfunding campaign to help cover costs of airfare and lodging. All of the cast and crew have worked as professionals in theater, but they are volunteering their time to do this show – it’s completely a fannish labor of love. For most of them, this will be their first Worldcon and they are super excited about it!”

If you’re interested in helping them, here’s what to do:

1. Check out their Rockethub fundraising campaign, which features information and backstage videos and all sorts of stuff to get you up to speed;

2. Check in on their Twitter feeds. Ruth Pe Palilieo says, of these:

“The characters tweeting are

“Also, we created one especially for folks who will be unable to attend Loncon 3. Lord Byron will buy them a virtual pint in consolation: @MayIBuyYouAPint

“(this last one is totally an in-joke for those who have read the novel.)”

2. As I noted on Twitter yesterday, Baen Books has launched the Baen Fantasy Adventure Award, which is a short story contest, the prize to be awarded at this year’s GenCon. You can enter! All the rules and information (including the submission window, which is now open) are at that link above. If you enter, good luck!

3. Congratulations to Ann Leckie, who just won the Clarke Award for Ancillary Justice! That’s the second award the book has won, along with the BSFA Best Novel Award (tie), and she still has the Nebula and Hugo to go. No matter what happens with either of those, she’s still having a very good year.

4. A scheduling note of note: Hey, I’ll be at San Diego Comic Con this year. My panels and events aren’t locked down yet, but I will let you all know when they are. But if you were on the fencepost about going to SDCC, well, now you have a reason to come! (Or avoid it, I guess, jerk.)

And there you go! 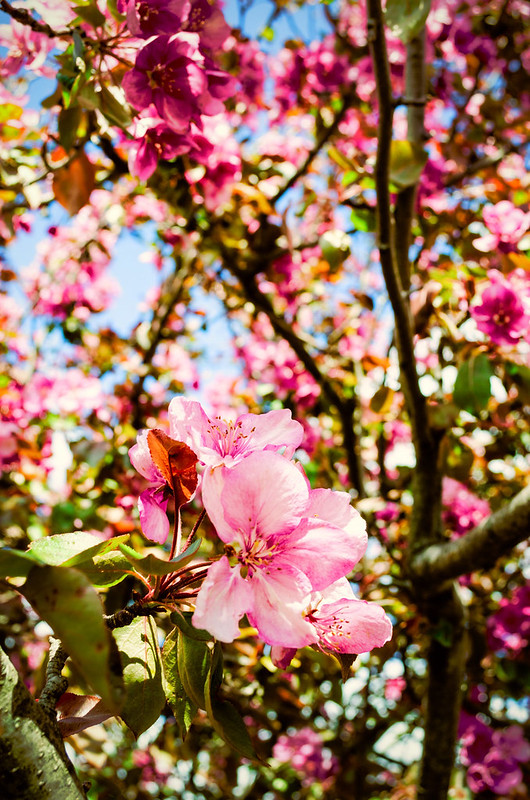 The adage about April showers appears to be true. Here at least. 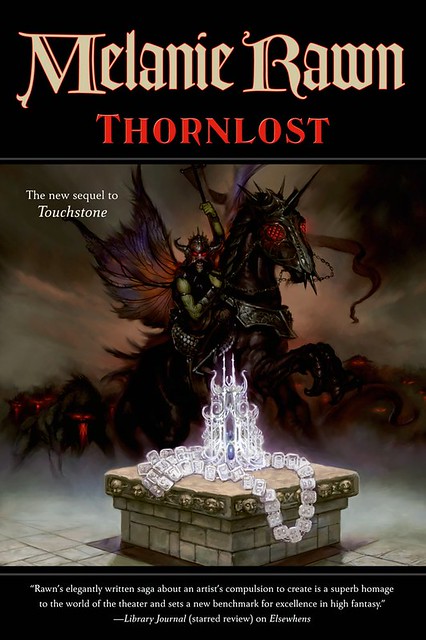 Melanie Rawn’s “Glass Thorns” fantasy series, which began with the books Touchstone and Elsewhens, now has a third installment, Thornlost, full of magic and drama… and, one might say, the series has a special emphasis on the latter. Rawn explains why that is in today’s Big Idea.

When it was first mentioned to me that I ought to write a piece for The Big Idea, it took a few minutes to get past what the phrase really means to me, and that’s this: Mom, standing over my sister and me and whatever fresh mayhem we had created (adorable little cherubs that we were), saying, “All right, you two—what’s the big idea?”

(Unfortunately, I was too young to remember what Mom said when—long before even the concept of plastic thingies that supposedly child-proof cabinets—she found me in the middle of the kitchen floor, playing very happily with about five pounds of flour. She told me many years later that she never did figure out how a two-year-old could get that Tupperware container open, let alone throw the flour so enthusiastically that it hit the ceiling.)

So what’s the Big Idea behind the Glass Thorns series?

As far as I can recall, I first saw a stage play when I was about nine years old. It was a matinée of Peter Pan—with Vincent Price as Captain Hook! I was in the front row and I can still remember looking up with saucered eyes at this tall, dark, villainously mustachioed gentleman with a gleaming silver hook at the end of one arm, standing not four feet away from me…and such was the skill of the actor that I wasn’t scared. (The Disney cartoon version terrified me. Actually, most of the classic Disney cartoons terrified me; for instance, I can trace my fear of clowns to Dumbo.) Memory, or perhaps imagination, supplies a twinkle in Mr. Price’s eyes and hints of laughter in his voice. He was including the audience in on the joke: This is isn’t real, you know—it’s all make-believe, and it’s such fun! What’s more, it’s magic!

Well, it was Peter Pan: of course it was magic. And I think I’ve viewed the art and craft of theater as magical ever since.

Now that I am quite a bit older than nine, and thinking about how one might use magic onstage, it seems to me that it isn’t just the special effects (instantaneous costume and character changes, feeling the wind that’s ruffling the leaves of the scenery, tasting the tea a character is drinking, and so on) that would make magical theater unique. When you get right down to it, it’s the emotions. Truly fine actors can do that anyway. There are performers who command our emotions even on a movie screen in two dimensions; there’s an intimacy and immediacy in live theater that can’t be matched for impact when the actors are truly accomplished. But what if, in this magical theater, it was guaranteed that you’ll cry and laugh and become furious or lovestruck or whatever else the players want you to feel?

Aristotle wrote about the cathartic emotions of pity and fear; that is, pity for those whose misfortunes are undeserved, and fear of punishment for those whose misfortunes are like our own. Greek drama was designed to evoke these emotions so that the patrons left the theater spiritually cleansed. But what if, in the playwright’s arsenal, there aren’t just words and the actors’ skills, but magic that compels the audience to feel what the character feels? The success of a play would depend not wholly on the words of the playwright and the performances of the actors, but also on the magical skills of the players.

Okay, then—what ought those skills to be? Somebody has to write the thing. Somebody has to act it—and because magic is used, that one person can play all the parts (switching costume and voice and physicality for each character, much as a single actor played all the parts in very early drama, using masks to signal the changes[1]). Somebody has to be in charge of working the magic. And somebody else has to monitor the whole, making sure that the magic flows smoothly and that nobody in the audience freaks out.

Now, what to call these people? Actor…mask…Masquer. Simple enough. And then I got stuck. So I consulted a delightful book called There’s A Word for It! by Charles Harrington Elster, and found three terms that worked very well indeed. The first, for the playwright, is Tregetour, meaning a street magician. Next comes the guy who regulates the magic, the Fettler, from a word meaning someone who puts things in order. And then there’s the player who actually wields the magic. He’s known as the Glisker, because glisk means a subtle sensation of pleasure or pain that pierces the soul and passes quickly away.

So I’ve got my configuration: a Masquer, Tregetour, Fettler, and Glisker in each group. These groups go out on tour, a bit like vaudeville, back in the days when theatrical companies owned venues in many different towns and cities, and hired performers to tour the country. The way it works in this world is that the Crown more or less owns the services of these players, and holds a yearly competition to see who gets top billing on the circuit. Guilds and other associations in each city bid for the right to present these groups. The Crown gets a large cut of the take, the hosts get another slice, and maybe some is left over for the players. Maybe. On their nights off, therefore, they do private performances—the Crown winks at this—and that’s where they make the real money.

Being a player in these circumstances is hard work, pretty much a young man’s game, and thus my characters are in their early twenties. Four young guys calling themselves Touchstone, traveling constantly, performing night after night for months at a time, living out of suitcases, meeting adoring girls at every stop who are just dying to join them in their rooms for a party…

And this is where we come to the “mainly” mentioned above. Cue up Joe Walsh[2]:

I live in hotels, tear out the walls

I have accountants pay for it all…

I have a limo, ride in the trunk

I lock the doors in case I get drunk…

It’s tough to handle this fortune and fame

A play in a theater isn’t rock and roll. But the very best rock and roll concerts are most definitely theater. I’ve been to a lot of both, and a lot of it has gone into Glass Thorns in one way or another.

So that’s the foundation of the whole long intricate tale. I get to tell some really bad jokes, explore a land of Wizards and Elves and Goblins and and Fae and all sorts of other magical folk, deal with the demands of the creative mind, make up (and sometimes steal) plots for plays, and build it all towards a magical showdown in the middle of a magical show.

As for Touchstone…life’s been good to them.

[1]  Interestingly enough, the members of the Chorus wore identical masks, indicating that they were all the same character.

[2]  The astute rock fan will note that some of these lyrics are from a live version of “Life’s Been Good” performed by Joe Walsh with the Eagles, not the studio version on Walsh’s solo album.