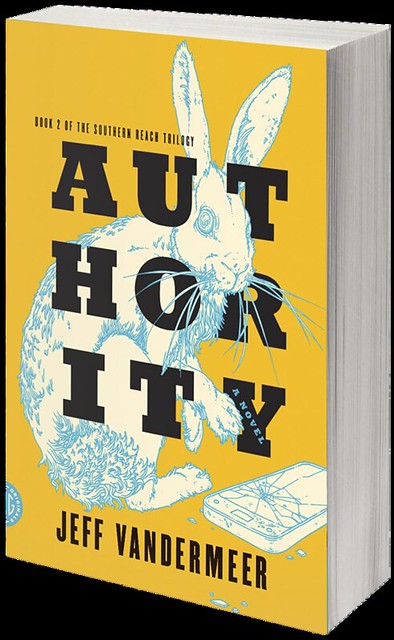 Jeff VanderMeer’s Southern Reach trilogy chronicles the thirty-year attempt by the Southern Reach, a secret government agency, to solve the mystery behind Area X, a mysterious coastal region closed off from the rest of the world by an invisible border. The first novel, Annihilation, documented the disastrous twelfth expedition, narrated by a nameless female biologist. The second novel, Authority, published May 6, is an exploration of the Southern Reach agency. The series concludes in September with Acceptance.

How do you make a novel haunted? Especially if you’re not dealing with ghosts? That question came to mind when, just before writing Authority, I watched the documentary Room 237, about Stanley Kubrick’s movie version of The Shining. Room 237 explores the startling number of meticulously thought-out crackpot amateur theories about the movie’s symbolism and underlying messages. One theory even tries to provide evidence that Kubrick is telling viewers the moon landing was faked.

Room 237 contains so many of what might be called “single-use universes” that it mesmerized me—especially in the context of also reading several accounts of scientific endeavor that stressed the subjectivity of research. Just how much our world is built from actual facts? How much is a fiction that we construct about the world?

The conspiracy theorists in Room 237 so firmly believed their version of the truth that I began to think at times that their ideas might have merit. But my own personal obsession with the documentary mostly concerned perception and technique. For example, in Kubrick’s slow fades as he cuts away to the next scene you often see characters and places coming into contact for a brief moment…hauntings created by juxtaposition. There’s also a scene in the movie with a television playing in the middle of a room…but the television has no cord, impossible for the time period. Watching The Shining, you may not consciously notice the lack of a cord, but your subconscious goes on red alert. Something is wrong, even if you can’t put your finger on it.

Seeing all of this excited the writer in me. I wanted to figure out ways to translate that kind of technique to text, in a way that’s invisible but that you can still feel in some way. In Authority, my protagonist, John Rodriguez, inherits a truly demoralized agency as its new director: A dysfunctional culture in a downward spiral, haunted by thirty years of being unable to solve the mystery behind Area X. He deals with outdated tech, bears witness to outlandish procedures, and meets resistance from people who resent the interloper.

So I worked hard to find the parallels. I don’t want to give away all of my secrets, but one “translation” involved deliberate but subtle continuity mistakes with regard to the Southern Reach building itself—for example, places that seem narrow in one context and then wider in another. This “trick” and others support a recurring joke in Authority that at times becomes deadly serious. Throughout the novel, Rodriguez walks down many corridors, lingers in many doorways, without ever getting where he wanted to go in the first place, sidetracked by some new issue or someone else’s priorities. In many of those scenes, the incidental hallway dialogue comes from Annihilation: a kind of haunting of one novel by another.

Thinking about technique in this way raised a larger question: “What would a non-supernatural novel be like if it employed, on some level, supernatural tropes?” This led to dividing the novel into sections entitled Incantations, Rites, Hauntings, and Afterlife, which correspond to states of understanding reached by my protagonist, but also raise other questions. Indeed, sometimes in a novel the situation and your character allow for outright mulling of such things, as when Rodriguez ponders how far the Southern Reach has fallen: “Maybe superstition was what happened when your director went missing-in-action and your assistant director was still mourning the loss. Maybe that was when you fell back on spells and rituals, the reptile brain saying to the rest of you, ‘I’ll take it from here. You’ve had your shot.’” 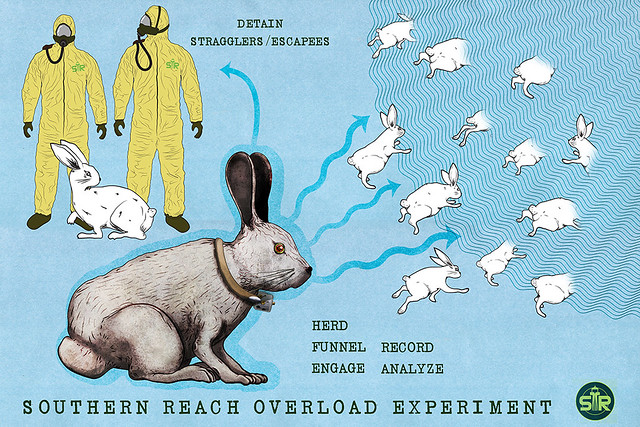 In a way, this is just an extension of what’s being shown Room 237: a type of magical thinking, which sometimes manifests in Authority in the form of strange experiments. At one point, frustrated, the scientists of the Southern Reach, who probably don’t know they’re getting perilously close to inhabiting their own separate “single-use universes,” decide to herd 2,000 rabbits into the invisible border that surrounds Area X. This border sucks in whatever touches it and sends it somewhere (although not into Area X). The thought is that this act might “overload the system.”

From that basic idea, it’s not too hard to envision a scenario where implementing this strategy might lead to a series of regulations (rites) that are absurd and eccentric. (As ably illustrated by Jeremy Zerfoss’s illustration.) Believe it or not, this kind of thing happens in real life more than you might think. Real life is always happy to support absurdity about the seemingly objective—take the recent discovery that mice fear the smell of male researchers more than female researchers, with possible ramifications for decades of studies.

Authority is, above all else, a thriller that focuses close-in on its protagonist, John Rodriguez. It’s influenced by spy stories, office politics, and weird science. While writing the novel, I was always aware of that fact. But there’s nothing that says you can’t cross-breed a thriller with what you find in Room 237 and wind up with a successful hybrid.

With or without thousands of white rabbits—and hauntings.