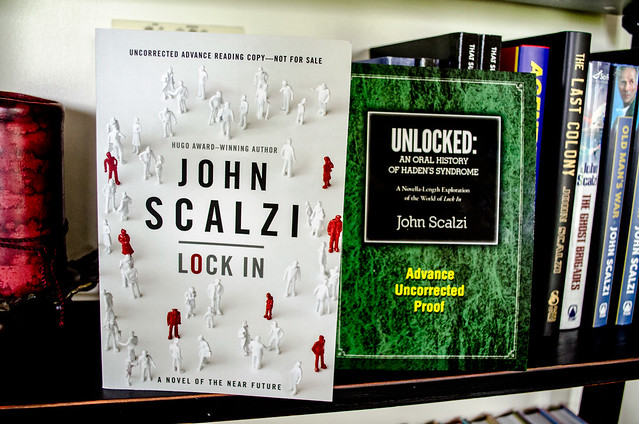 For the record: I love love love getting physical ARCs. I’m happy to live in the electronic age, but getting something that looks and feels (and hell, is) an actual physical book still lights up all my squee neurons. Because it means the book is really going to happen. ARCs aren’t cheap. They wouldn’t make ’em unless they were going all the way with the book. And, yes, I knew they would (they paid me a not trivial sum for the book), but still. Look! Book book booky book book.

And yeah. That sends me off into the weekend pretty well.

(Turning off comments here because I’ve ranted on Heinlein just recently and covered some of the same ground, and therefore I suspect this comment thread would be mostly a repeat.) 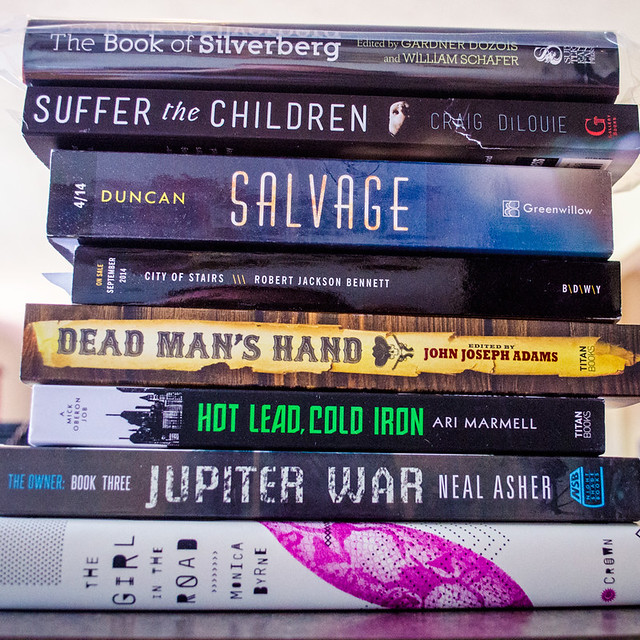 So, what looks good to you here? Share in the comments! 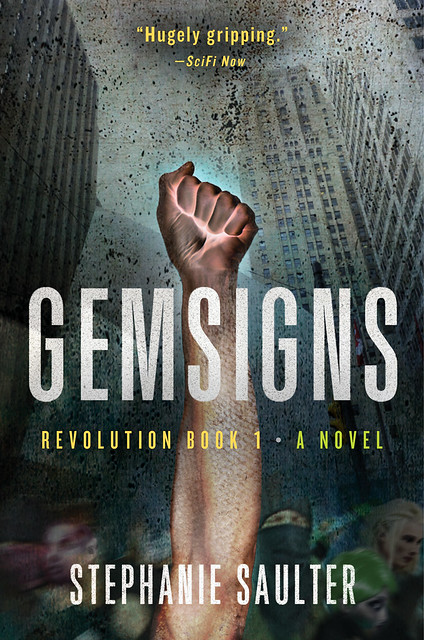 Humanity: It’s a big subject. What “humanity” entails as an overall concept, an even bigger one. But that doesn’t scare off Stephanie Saulter — indeed, in Gemsigns, it’s a topic she runs toward, to explore what it means in her novel’s world.

What makes us human?

Not so much a Big Idea as a Big Question, perhaps; but as the story that would in time become Gemsigns started to take shape in my head I knew it was one of the themes I wanted to explore. It’s a question that most of us will think we know the answer to – but try to pin it down to a simple definition and I suspect you’ll find it’s not that easy. Is it purely a matter of biology? What then if a person’s biology is altered, either by accident or design? What about behaviour? Are the people whose actions we find incomprehensible and appalling really as human as we are?

It’s a subject that fascinates me, not least because of how deeply it underpins the way society is structured. Our value systems – and therefore our prejudices – are all based on an idealised conception of humanity; a notion of how people should be. Deviations from the ideal are met with varying degrees of revulsion, rebuke and reduced social capital.

On one level this is a pretty logical moral structure; few, for example, would argue against condemnation of a murderer (always assuming that your Ideal Human is one who cares about the safety and wellbeing of others). But the metrics of humanity can prove tricky. What if that unconscious mental ideal happens to be constructed as a white person? Or a male person? Or a fit and healthy person whose physical capabilities fall within a statistically standard range? What does that imply for the perceived humanity of brown people, or female people, or people with different physiques and capabilities?

There’s no shortage of discussion, online and elsewhere, of the consequences in our own societies. It’s a rich subject for fiction and polemic; and the narratives and debates predictably tend to divide along the same oppositional us/them lines as does the tribal dynamic itself.

I wanted to find a new angle, a different approach to the question. I wanted to start from first principles, and to ask: How do we form that initial notion, of how people should be? How rational and rigorous is it? How often do we examine it? How easily do we allow ourselves to be swayed, by the pronouncements of others or by our own self-interest?

So I set about creating a world in which those questions could be formulated free of the weight of contemporary disputes or politics. It was important for it to be recognisably a human environment, populated by characters and conflicts that readers would find relatable; but it was equally important that it be different enough from our everyday reality for the answers not to be obvious. I also decided early on that I didn’t want to employ the standard science fictional trope of a society in existential crisis – because that makes it too easy to wave ethical concerns away under the rubric of, ‘It’s an emergency.’

Instead I constructed a post-crisis society: one still recovering from a biological catastrophe which the human species had only survived by employing widespread genetic modification. For the majority of people that modification had been minimal; in theory just enough to ensure their lifelong health. In practice, by reducing the variations that can lead to disease and defect, it has created a far more homogenous populace. For a significant minority, however, the alterations were extensive, resulting in a chattel class of people with radically modified physiques and abilities, easily identified by their altered anatomies or phosphorescent, jewel-coloured hair – the gems. Not only are they distinct from the majority, they’re also generally distinct from each other.

That allowed the us vs. them dialectic to be framed a bit differently. Given that gems are known to have been artificially engineered in a way that norms have not, the question becomes: to what extent does this matter? Does the sameness of the norms really represent the way people should be? And getting away from genetics, what is it reasonable to expect of people who were raised in industrial créches and lived under conditions indistinguishable from slavery? How much violence, anti-social behavior and suspicion of authority can be explained by this? What’s the differential between them and those who’ve led safe, happy, comfortable lives? Is it possible to determine how much of the variation is down to engineering, and how much to environment?

Who is made more – or less – human as a result?

I didn’t want to provide answers from a single perspective. It’s another common fictional device: a clearly identified hero whose worldview is the only one the reader gets to really inhabit – and thus ends up largely inclined to agree with. Within the world of the novel, that protagonist acts as the benchmark for the Idealised Human. But if you’re trying to get away from oppositional I’m-right-you’re-wrong dynamics, then as a writer you have to open it out a bit; you have to try to put the reader behind the eyes of characters who see the world differently. You have to try to imagine what it would be like to share their hopes and fears and beliefs. You have to see them from the inside.

You have to show that all of them – even the ones you most dislike and despise – are, within their own frame of reference, human.

If you think that creating a balanced, coherent narrative out of such essentially conflicted viewpoints sounds like a challenge, you’d be right. Humanity’s relationship with the idea of humanity turned out to be at least as fraught within the world of the ®Evolution as it is out here. My Big Idea was to take a huge, complex, difficult question and not reduce it to a simplistic answer; but to try and examine it honestly, in all its complexity.