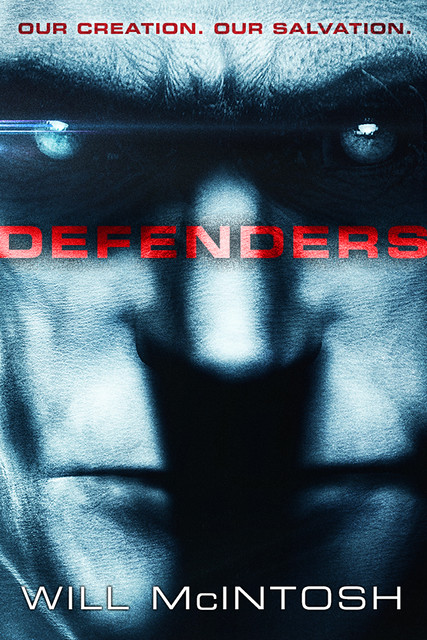 The Bad Guys: You know ’em, you hate ’em. But there’s also some truth in the saying that everyone is the hero of their own story — and that it’s not always clear cut that in a conflict one side is purely good and the other purely evil. Will McIntosh wrestled with the ideas of villains and heroes for his novel Defenders; here’s what he found out.

I don’t particularly like stories with villains. I prefer the good and bad in characters to be more a matter of degree, and, ideally, subject to individual interpretation.

I prefer Frankenstein to Dracula, for instance. Count Dracula is a bad guy, no doubt about it. Stab him in the heart and no one sheds a tear. But what are we supposed to feel as the Frankenstein monster burns? He kills people, he’s a psychopath, but he was thrust into the role of monster–he didn’t choose it. Maybe Victor Frankenstein is the villain of the piece, but here again, it’s complicated. The good doctor screwed up royally, but that wasn’t his intent, and intentions count when we’re judging good versus evil.

When I set out to turn my short story “Defenders” into a novel, I didn’t want one species to be the clear cut villains. This was challenging, because the alien Luyten invade Earth, unprovoked, electrocuting and melting billions of people. The path of least resistance would have been to cast the Luyten in the role of villain, but I wanted things to be more ambiguous.

Without giving too much away, there are three species in Defenders: 1) humans, 2) the invading Luyten, who can read human minds, and 3) the defenders, genetically-engineered warriors humans create to battle the Luyten.

My aim was to weave a story where at various points each of these players feels backed into a corner, with no choice but to lash out. Often they do have a choice, but their nature, their limitations, lead them to conclude they don’t.

To partially absolve the Luyten, for example, I created a backstory where they were forced to flee their home planet, and spent decades heading toward Earth–the closest viable refuge. It never occurred to them that Earth might be inhabited by another sentient species, and when they arrived and surreptitiously sampled humans’ minds, they realized humans didn’t have the constitution to share their world with millions of clairvoyant aliens. They decided their options were to invade, or perish.

As the story unfolds, the defenders make a strong case as the villains of the piece. They have the emotional maturity of adolescents, they’re socially inept, and they’re apt to fly into a violent rage over petty grievances. Whose fault is that, though? They were made that way. They were created to be warriors, knowing and loving nothing but war. They’re Frankenstein monsters.

The defenders are also war veterans, and my hope is that this makes them sympathetic as well. Without their sacrifice, humanity might have ceased to exist.

Does that make humanity, who created the defenders, the real villains? Well, what choice did they have? Clairvoyant aliens had invaded, and were wiping them out. They had to do something, and fast.

Which brings us full circle, back to the Luyten.

My hope is readers will feel that a case can be made for any of the three species being most responsible for the cataclysm that unfolds.

While there are unquestionably villains in the world, I think most human conflict takes this form, where the villain of the story depends on your perspective. While I was planning this post, my wife reminded me of the ever-shifting alliances in the novel Nineteen Eigthy-Four, where Oceania is at war with Eurasia and allied with Eastasia on one day, and allied with Eurasia and at war with Eastasia the next. Yes; one day someone is your sworn enemy, the next, they’re your ally. Maybe that’s why I’m uneasy writing about villains.

15 thoughts on “The Big Idea: Will McIntosh”