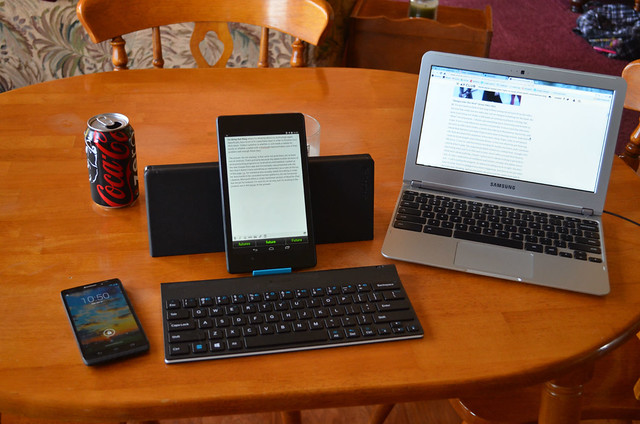 Me, fiddling around with technology today, not just because I’m avoiding work but because I’m thinking about travel — I have a substantial travel schedule this summer, which means I will need to write on the road, and I’m trying to decide the best way to do it — full featured laptop? The Chromebook? A tablet with a keyboard? All come with advantages and disadvantages — the tablet pictured here, for example, doesn’t come with a decent word processing program (I define a “decent” word processing program as one that allows me to use a ruler for formatting). But on the other hand it’s small and superlight (even with an outboard keyboard), and will last hours longer than any of the laptops I own, power-wise (and when it’s tapped out, I can recharge it with a portable battery, which is useful in outlet-strapped airports).

The laptop is full-featured, but craps out relatively quickly when on a battery, and even the 12-inch Dell I have is often too big for airplane use, especially if the person in front of me feels like reclining. The Chromebook is a good middle-ground, but it has to be connected to the Internet to function, which is not always ideal on plane ride, etc. And so on. There are other options available to me if choose to spend money to buy them, but I’m trying to work within the (already ridiculous amount of) technology I have. So.

Yes, I know. My life is hard. Even so. These are things I think about, in order to get you the work you want.