This Memorial Day weekend I will be down in Houston for ComicPalooza, where, in addition to just hangin’ with nerds, as one does at such conventions, I’ll also be be doing two programming items:

Saturday at 2pm: Reading: I’ll be reading from Lock In and also doing a Q&A about whatever people have questions about me, my books, and anything else people might have questions about (although, I suppose, if they asked me how to perform brain surgery, I don’t think I would be able to offer up a very satisfactory answer). This will be in panel room 24

Sunday at 2pm: Financial Tough Love for Writers: In which I take some of my experience as a finance writer and consultant to financial organizations, and my experience of being a professional writer, and talk about some of the realities of finances and writing. Those of you who were at Viable Paradise while I was teaching there will probably remember this particular rant of mine. I’ll be taking questions here, too. This will be in panel room 2.

There may be other events, but I’m still getting information on them. I’ll let folks know when I get it. Also, of course, if you see me wandering about, feel free to come up and say hello. That’s what I’m there for.

Update: After both panels I will be signing books at the Barnes & Noble booth, for about an hour (i.e., roughly between 3 and 4pm). 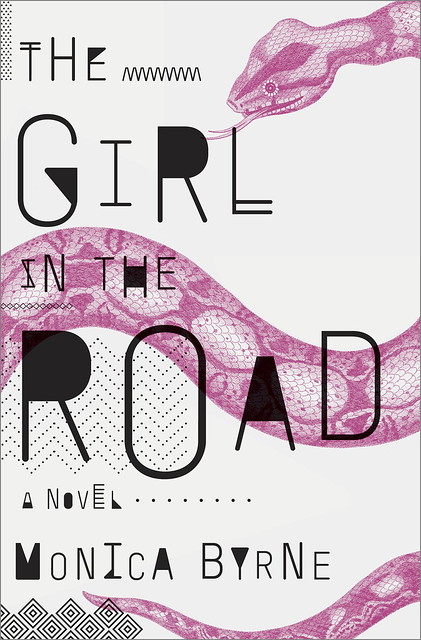 First, a disclosure: I read a galley of Monica Byrne’s debut novel The Girl in the Road and liked it enough to give it a blurb — as did Neil Gaiman, Helene Wecker and Kim Stanley Robinson. And so in reading this particular Big Idea, I find myself not entirely surprised that a book this strong has come out of an equally strong moment of emotion, and, yes, despair. Byrne tells you now of that moment, standing by a set of tracks.

Was my life worth continuing after trauma?

On the morning of July 22, 2012, I was standing by railroad tracks in Geneva, Illinois. I’d just come from a successful reading of one of my plays, commissioned by a local company; and was waiting for the train into Chicago to meet a dear friend for lunch.

But I’d just gotten some bad news that had triggered a lot of old pain. I’d slept badly, dreaming over and over that I was at a glamorous dinner party, rising in a gown with my champagne flute to insist to the gala that I was happy. But no one believed me.

I saw the train coming down the tracks, with its triad of bright lights, like a celestial insect, and the thought came into my head: “In the next thirty seconds I could lie in its path and lay this burden down.”

Instead, I focused on the dear friend I was going to have lunch with, and pointedly walked away from the tracks.

A few minutes later, shaky but safe in my seat with Illinois suburbs passing by, I thought, Well, that’s what The Girl in the Road is about.

I put that scene right in the beginning of the novel. But instead of being set in Illinois, it’s in Kerala, India; instead of 2012, it’s 2068. My hero Meena Ramachandran is waiting for a train to Mumbai and steps out onto the tracks. She’s pulled to safety at the last second. But the act continues to haunt her.

Meena and Mariama—the other hero of The Girl in the Road—live forty years apart and on different continents. They experience severe trauma and are abruptly catapulted out into the world. One stows away on an oil caravan headed east across the Sahara and falls under the spell of an enigmatic patroness who calls herself Yemaya. The other swims out to a floating pontoon bridge called the Trail, an energy-harvesting device largely abandoned by its makers, that spans the Arabian Sea. They’re both headed to Ethiopia, the home of Dinkenesh (known in the west as “Lucy,” the skeleton of our earliest human ancestor, Australopithecus afarensis) where their stories—and their traumas—converge.

Along the way, both Meena and Mariama are repeatedly tempted to “lie down in the road”—to die, to stop existing, to opt out early from the web of karma that plays out, not for moral reasons, but simply because love and violence are both forms of energy, like heat or light, which have already set us in motion from the moment we’re born, from the actions and choices of thousands of ancestors who’ve come before us, and knock us across the world like billiard balls until we come to rest, by nature or by choice.

And yes, the choice to exit early does exist.

But so does the choice to continue living. And not only to keep living, but to radically choose life, to grapple directly with the energies you’ve inherited, and so use them and transform them to build an entirely new life that is more bold, more bright, and more beautiful than you’d ever imagined you could have.

Meena learns what happens when you make that choice, instead.

In other words, The Girl in the Road is my 90,000-word answer to the question “Was my life worth continuing after trauma?”

The Girl in the Road: Amazon|Barnes&Noble|IndieBound|Powell’s