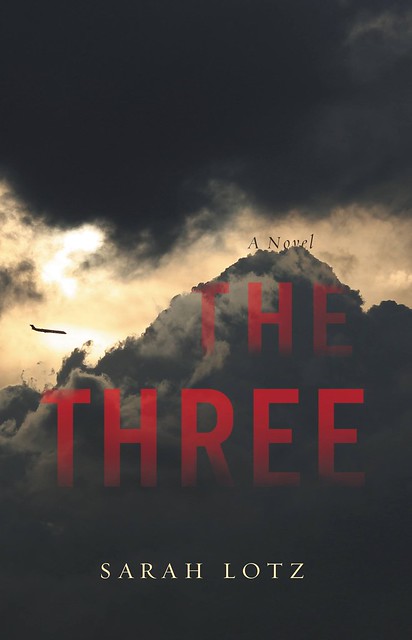 Airplanes make you nervous? You’re not alone — Author Sarah Lotz, for one, feels your pain (or at least, your anxiety). But where Lotz diverges from most people who get twitchy about air travel is that she used that unease as a launching pad, as it were, for creativity — resulting in her new novel, The Three. She’s here now to tell you how this story took flight.

I’ve always wanted to write a novel about plane crashes. Part of this is because I’m flight-phobic, so air travel has always held an extra dollop of dread and fascination for me. Those of us who suffer from aerophobia are aware that it’s an irrational fear – we all know that statistically we’re more likely to die in a freak shopping trolley incident than in a plane crash. This doesn’t stop us from mainlining valium and secretly believing, like Charles Grodin’s character in Midnight Run, that planes are just too big to stay in the air.

So that’s where the initial idea came from – a phobia. Then came: but what if there wasn’t just one air accident, but several on the same day? That would send the world’s media into a frenzy. Plane crashes tend to dominate the news – the recent global coverage of the Malaysian Airlines Flight 370 tragedy is a case in point. Next, I started thinking about survivors. What if they were children? And what if they’d escaped what should have been certain death relatively unscathed? The tabloids would be all over the story with the fervour they’d display if Princess Di rose from the dead. Then came: What if a bunch of conspiracy theorists or religious fundamentalists decided to focus on the ‘miraculous’ child survivors, and began to spread the notion that their survival and the tragedies were signs of alien activity or evidence of the forthcoming apocalypse? How would that play out? And how would it play out if they were right?

I know: So. Many. Questions.

I decided that if I wanted to make this a truly global story, the planes needed to crash on four different continents, which would also feed the conspiracists’ theories. And as it would be lazy to choose cities and countries I was familiar with simply for convenience, I made a shortlist of possible locations. In the final draft, one of the planes crashes into Florida Everglades, another into the heart of the notorious Aokigahara ‘suicide forest’ at the foot of Mount Fuji in Japan, the third slams into Khayelitsha, Cape Town’s most populous township, and the fourth, a British low-cost charter flight, falls out of the sky off the coast of Portugal. As the survivors, their guardians, the conspiracists and those investigating the crashes would all be from diverse backgrounds and cultures, I knew I’d have to do a great deal of research to have any hope of making their narratives believable.

Turns out ‘a great deal’ was an understatement. The research took months, and included interrogating commercial pilots and air crash investigators, travelling to Japan to visit the Aokigahara forest, studying NTSB reports, riding along with South African paramedics, delving into eschatology, looking into Japanese economic history, dallying on conspiracy forums chatting to people who believe that aliens really are here, and investigating the influence of the religious right on the US political landscape. I also read several CVR transcripts of pilots’ last words as their planes went down – never do this, it’s incredibly upsetting.

At the end of all this, I had too much material, too many characters and I needed to find a way in to the story that would reflect the global scope of it, but wouldn’t involve 400 pages of exposition and info-dumping. And I’ll be honest, my first three attempts were awful. Taking a leaf out of Max Brooks’s brilliantly structured World War Z, I chose to write it in a way that wasn’t necessarily conventional, marrying first person ‘interview’ narratives with non-fiction accounts and framing it as a book within a book, written by a possibly biased journalist. This also allowed me to play around with potentially unreliable narrators.

Have I pulled it off? I honestly don’t know. But I’m glad I took the risk. Writing a novel about air disasters may have made my aerophobia worse, but stepping way outside my comfort zone has meant that whenever I’m asked for writerly advice (admittedly, this doesn’t happen often), I can now say, with complete honesty, that sometimes it’s best to write what you don’t know.