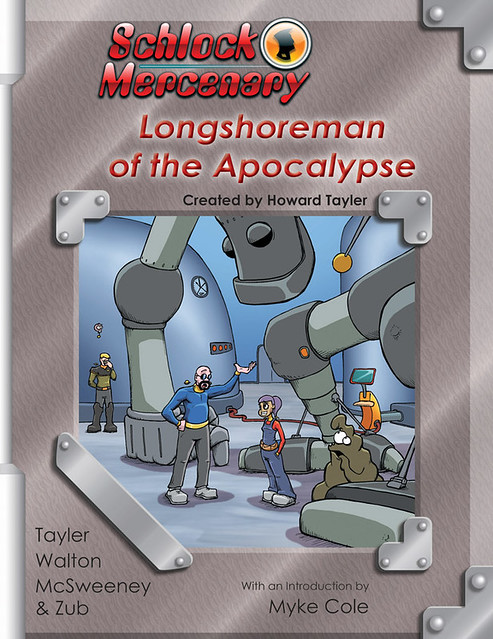 In today’s Big Idea, Howard Tayler, the brains behind the multiply-Hugo nominated Schlock Mercenary Web comic, tells you how the little things — the really little things — mean a lot for his latest graphic novel compilation, Longshoreman of the Apocalypse.

So, I had this image in my head. Someone was firing artillery inside a rotating space-city, but was missing their targets because the artillery piece wasn’t smart enough to aim correctly within a rotating reference frame. The obvious solution, the soldier’s solution, is not “quick, do the math!” No, the solution is “I’m going to have to walk my shots.”

Rotating space-cities are standard fare in science fiction. This wasn’t really a “big idea,” but it was the awesome moment I found myself aiming for, and as a discovery writer, “aiming for” is an awful lot like “walking my shots.”

The big idea? That was collateral damage, struck by a stray shell as I walked round after round toward the moment I wanted to hit.

See, for somebody to be playing with artillery indoors, something has to already have gone very wrong. The alternatives to using the artillery need to be worse. And more than that, there needs to be some complexity to the problem, something that will justify far more than just the preventative abuse of ballistic rounds.

Have you ever considered just how fortunate we are that nuclear weapons are phenomenally difficult to build? The key materials are rare, and the equipment required to work with those materials is expensive, and when all of the other complications are factored in, it’s far more likely for the back-yard nuclear engineer to die of radiation poisoning than to create anything more potent than a very toxic hand-warmer.

The Schlock Mercenary universe is an energy-rich place. “Annie Plants” convert teency pellets of neutronium into energy (via some black-box handwavium that I introduced back when I sloppier), but those devices are so heavy, and so full of fail-safes, that they don’t fit the bill.

Schlockiverse engineers can, however, create and contain antimatter, one atomic nuclei at a time, inside carbon fullerene buckyballs. And if I let them do that, my story has some ultra-fine black dust in it, a teaspoon of which can level a city.

Schlock Mercenary is, at its heart, comedy. And I suppose it says something about me that when I go looking for a funny story, I arrive at multi-megaton yields being juggled by non-engineers who want to protest the way their clunky, stupid government is handling the food shortage.

Longshoreman of the Apocalypse is a fun title, and it promises an apocalypse. Oh, look! I have antimatter in a brown paper bag…

Longshoreman of the Apocalypse: The Schlock Mercenary store. Orders between now and June 3rd will signed.

← And Now, the First Ripe Strawberry of the Season
The Big Idea Artist Spotlight: John Harris →