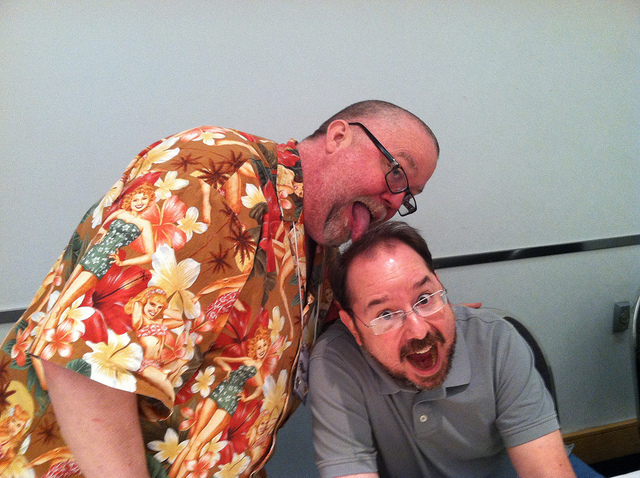 I can’t actually remember when it was that I first met Jay Lake, which is an unusual thing for me. I can often tell you the exact time and place I met most people I care about, from my oldest friend Kyle (on the bus on the first day of second grade) onward. I suspect my memory of meeting Jay is more diffuse because I first knew so many people who knew Jay, so that by the time we had our first meeting it felt, by commutative property, that I already knew him. I’m racking my brain here and coming up with nothing. From the point of view of my memory, Jay just was.

The picture above, taken at 2013’s Nebula Awards Weekend, was one of the last times I saw him in person. In case you’re not clear what’s going on here, he’s attempting to taste my brain, and I am both alarmed and intrigued by the attempt. Because, you know: Jay. That’s him. A big goof in a Hawaiian shirt.

In between the nebulous start of our friendship and that brain tasting. I am happy to say I got a good amount of quality time with Jay. We shared many conversations about writing and the sf/f community and other things. We collaborated together on a project. I blurbed one of his books. He and Elizabeth Bear instigated the Campbell Tiara, which I was honored to be the first (but not the last) to wear. Indeed, “instigating” is a thing he did a lot of, both for good and for fun. I was happy to be an occasional participant of the instigations.

He was my friend, in short. In moments like these I always feel like I need to be careful about overstating the friendship; I don’t want to claim a special status. So many more people are ahead of me in the line for Jay’s affections, starting with his partner, and his daughter, his family, and then moving down the line. Nevertheless we were friends, and there was mutual affection. I am happy to have shared in his life in the amount I have been able.

Of the many things I admired about Jay, his ability to write, in astoundingly huge gouts, was chief among them. He had nine novels and three hundred short stories published during his career, during which he also maintained a full-time job and, alas, had to fight against the cancer that would eventually take him from us. It’s not necessarily a smart thing to compare one writer’s process with another’s, so I never compared my output to Jay’s. But one thing I did do, whenever I was having a little pity party for myself about how hard my writing life was at the moment, was to remind myself of Jay’s work ethic, even in the face of everything he had to deal with. Writers write.

Jay was an excellent writer — the winner of the Campbell award and a nominee for the Hugo and the Nebula (among others) — and he was a person who was open about so much of his life. When it came to his cancer, it was no surprise that he would write about it and write about it nakedly, chronicling what seemed almost every aspect of his fight with the disease with a lack of personal vanity. Jay never painted himself a noble sufferer as far as I could see. He was pissed that he had cancer, angry about what it was taking from him, and apprehensive about the end of the only life he would have.

He was, in a word, human about it. I like so many others in science fiction and fantasy read these posts — not only because Jay offered them like signposts, letting us know where he was in his journey, but because, I think, Jay was asking us to stand witness to his life. I tried to be the witness I thought he was asking me to be. I think many of us did.

Goodbye, Jay. You are remembered, and loved.

He died this morning. The news is here.

I’ll have more to say later, but for now: He was and is my friend, and I will miss him.

Update: A remembrance of Jay Lake.