Want one? Sure you do. Go here to enter. Good luck!

Sorry, my UK friends and fans: Sadly, I won’t be attending Loncon 3 this year.

The reason for this is pretty simple: my novel Lock In comes out on August 26 (August 28 in the UK), and on that day I start a four week book tour here in the US. Before that date I’ll be doing some appearances and promo and PR work. I’m also, importantly, writing a novel, which needs to be done so you can all have it next year. I’m trying to get as much work done on it before that I do those four weeks on the road. I can write on the road, and do, but not as much, and frankly not as well, as I do at home.

Loncon 3 is August 14 – 18, and travel to/from will eat up an additional day on either side, plus jet lag, travel fatigue, etc. That’s basically a week out of my schedule, a week before a long tour, with a book on deadline. Knowing myself as I do, I wouldn’t expect I would get a lot of writing done in that interim week between Loncon and my tour.

Essentially, attending Loncon means six weeks of not getting work done (or of getting it done particularly effectively). At this point, given my scheduling for the year, and the scheduling of the book I’m writing, in terms of deadlines and its release in 2015, I just can’t afford that much time out of the production schedule.

And it’s killing me. I was an early and enthusiastic supporter of the Loncon 3 bid, and have been very much looking forward to what would be my first trip to London, which is a city I’ve wanted to visit for, well, pretty much forever. I’ve been looking at my schedule of commitments and my writing schedule, trying to find a way to convince myself that I could make the travel and the writing work. But realistically, it’s not going to work, and I have to lock in my August schedule now.

So: Sorry, UK. Have fun without me.

But! I swear on everything that is good and pure that I will find some way over to you soon(ish). Because I want to, and because it would be fun, and because London, which I want to see and experience. It will happen. Just not this particular Worldcon.

How wake ups happen at the Scalzi Compound:

Daughter needs to wake up so I am playing Cure songs on the acoustic guitar until she is driven from the top floor of the house.

I am the best dad ever. 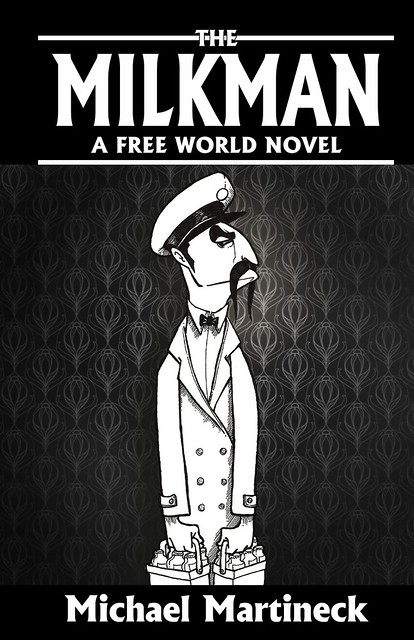 The concept of economics is one that wends through our entire lives — but what if we lived in a world where economics were even more pervasive than it is right here and right now? Michael Martineck has been thinking about just that world in his novel The Milkman, and today he’s here to offer you a tall, frosty glimpse of what that world would be like.

The big idea of The Milkman is a world with no governments. It didn’t start out that way. I was going to write about a guy who brings milk to your home. Can you imagine? You wouldn’t have to go to the store for it. The guy would traverse his neighborhood, getting little glimpses of peoples lives. Turns out that was a real thing, not that long ago, so I needed a new idea.

I entered college in 1984, intending to learn whatever I needed to be a writer. This would be easy. My father raised an eyebrow and said, “You’ve got to write about something.” I picked economics because of course everyone wants to read about economics. It’s right up there with dairy delivery.

Studying economics is actually more interesting than it sounds. It’s not about money. It is about people interacting with people. It only looks like it’s about money because capitalism is so profoundly powerful. The fears that George Orwell spells out in 1984, of a world gone terribly to the left, are ironic. It is now the other way around. Which got me thinking.

What would capitalism look like, cut from the ties of sovereignty? No laws. Hell, no rules. We are taught that markets are self-regulating. They urge themselves ever toward harmonious equilibrium. The invisible hand of the great and powerful market guides us all. It should be heeded, not impeded. Big government is the villain, caging our animal spirits, wrestling the market’s hand to the table.

How would society function without legal structure? I’m not talking about weak governments. I’m talking gone. What happens when people are governed only by the laws of economics and physics? It’s a big idea. Huge. Too big for me to write about. For 30 years it tumbled about in my head like a nickel in a dryer. Clunk, clunk, clunk.

One day I listened to Robert Parker talk about how Boston shapes his Spenser novels. The setting is almost a character, a participant in every mystery. I had a setting that acted like a character. Why not put the character in a mystery. Except, murder in the Free World – the world of The Milkman – breaks no laws because, well, there are no laws.

There are budgets, bottoms lines, and expectations regarding return on investment. Killing has costs. Someone should be made to pay for it. Literally. Breaches in corporate policy and suspected sabotage need to be investigated and assessed and liabilities appropriately assigned.

Not that this is justice. Funds are impersonal. Money cannot make you stop missing a person, place or thing. Sometimes you miss something even more when it’s gone, when it was taken for granted. For example, maybe you don’t think about how – I don’t know – milk is safe to drink from any old carton you grabbed at the grocery. You don’t ponder whether or not it is free of hormones and harmful bacteria because it has to be by regulation. Until there is no regulation.

The most cost-effective way to make milk is to not worry so much about the safety. Sure, it might kill off an infant here or there. Nothing’s perfect.

That doesn’t mean we stop trying. As my characters work through my setting they try to right wrongs. Regardless of how heartless the environment, they act like people and people care. Under the oppression of emperors and czars, bureaucracies and banks, people love and live. We still try to make things right. We fight for fairness, forcing it into the equation even when it doesn’t fit the math. When it means nothing to the bottom line.

The structure of the Free World is different from our own. The people in it are very much the same. The biggest idea in my novel is the one I didn’t have. It emerged through the characters. The world’s always been screwed up. I screwed it up a new way and realized there would still be some who would chip and chisel, carving out decency. I wrote a story about the dispassionate cruelty of economics through a milkman who touches a number of lives. So I kept my original title.