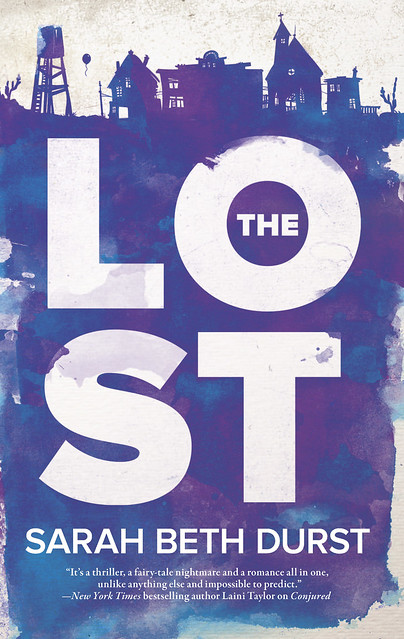 Stoplights can change your whole life — or at least the course of your fiction. Ask Sarah Beth Burst about this: A moment at a light helped her get lost — that is, The Lost, her latest novel.

This book was born at a stop light.  One random day, I waited, blinker on, to turn left and thought, “What if I didn’t turn?  What if I never turned?”

I turned.  But Lauren doesn’t.

In The Lost, Lauren is supposed to go to work at her dead-end job while she waits to hear the results of her mother’s latest medical test.  But instead of taking that left, she drives straight.  And drives and drives until she runs out of gas in a town called Lost, which is full of only lost things and lost people.

So that’s the big idea behind The Lost:  What happens when someone is lost in every sense of the word?

Lauren feels as empty as her gas tank, and her life feels meaningless.  But she’s terrified that her sick mother might be dying without her.  In order to escape from Lost, she’ll have to (quite literally) find herself, with the help of a mysterious man called the Finder and a knife-wielding six year old girl.

I started this book with a list — a three page single-spaced list of everything I could think of that could be lost:

This list is the oldest thing in my drafts folder for the entire trilogy, and I kept coming back to it as I built and populated the town.

The concept behind the town is that it’s filled with lost things.  Only lost things.  To live, people have to scavenge through the piles of lost baseball hats and lost cell phones, and then barter for what they need.  Ice cream, for example, is nearly impossible to find, but there’s no shortage of half-eaten sandwiches and soggy French fries.  Mail piles up in the post office but can’t ever be delivered.  Feral dogs roam the alleyways.  And a single red balloon always floats over the town.

I fell in love with this quirky, creepy town.

I also played “Hotel California” pretty much on repeat.

Writing this book turned out to be a surprisingly intense experience.  I wanted to create a dreamlike feel, so I chose to use first-person present tense.  This makes the pov very, very tight.  I laughed when Lauren laughed, and I cried when she cried.  I also spent many late nights wanting to shake my fist at the sky and shout, “Verbs!!!”  Dratted present tense.

The other choice I made while writing this book was to write it more organically than I usually do.  Usually I love my outlines and don’t veer from them.  But for this book, I let myself get lost with Lauren and followed her where she led.

Best part about getting lost in the writing is the surprises.  Like Claire.  Claire is a six year old girl who wears a tattered princess dress and carries a teddy bear and a very sharp knife.  She wasn’t in my original outline, but when Lauren got cornered by an angry mob, she walked out of the crowd, took Lauren by the hand, and calmly led her out:

Glancing back, I see the mob has spilled back onto the street.  They are watching me.  So far, they aren’t following, but that could change.  “If you know a place to hide…”

The girl switches direction, pulling me into the alley between the barber shop and a decrepit triple-decker house.  She still doesn’t speak.

I don’t know why I’m trusting her.  “Are you helping me, or dragging me someplace private to cut me to pieces and feed me to your teddy bear?  Just curious.”

The girl looks at me with her wide eyes.  “My name is Claire.  And my teddy bear is not hungry today.”

She became one of the major characters, of course.  I mean, seriously, what writer in his/her right mind would let a knife-wielding six year old just walk away?

In a way, she’s emblematic of the entire trilogy: the good that can come from loss, the surprises you can find when you are lost, and the way your life can change in a moment.

The Lost will be followed by The Missing in December and then The Found in April.  And I am happy and excited and thrilled to introduce you to Lauren and welcome you to Lost!