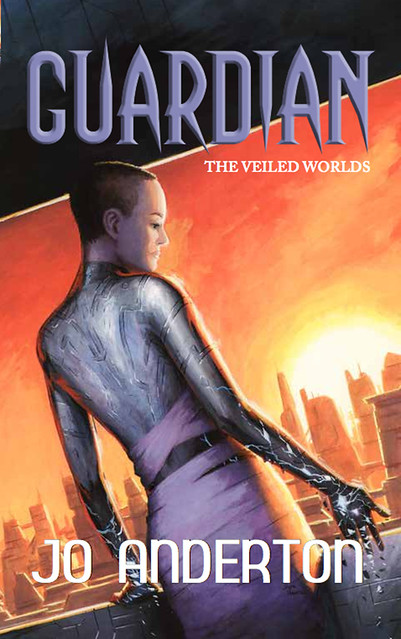 As the title of this feature suggests, big ideas are important to the writing of books. But big ideas aren’t the only thing about writing a book — and as Jo Anderton found out writing Guardian, other aspects of what make a novel fly will find their way into writing, sometimes almost without the author intending it.

The Veiled Worlds books are all based on one Big Idea, but it’s taken me this long to work out that’s not really what they’re about.

It all started with me wondering why so many of the fantasy stories I know and love are set in pre-industrial worlds. So you live in a world with magic in it? That’s great. I’m jealous of you (yes, I actually am), but let’s see what we can do with that magic. Can we make it more accessible to more people? Can we make it more efficient? Let’s use it to create cities, to run industry, to wage wars. Essentially, let’s industrialize it.

A magical industrial revolution was my Big Idea. A world where technology is built on, and run by, magic. So I needed a kind of magic that could be industrialized, and ended up with pions: semi-sentient particles that can be persuaded to rearrange matter itself. Instead of a select few magicians living in towers, everyone has access to pions – to some degree. If you’re particularly well educated or connected, you can create art or command armies. Everyone else gets to work in factories.

But everything has its cost, doesn’t it? The cost of our industrial revolution is pollution, and the same rule applies. Instead of smog and rubbish, however, the cost of this particular magical revolution is debris. A waste product that interferes with the pion systems that run so much of the world, from food production to sewerage to weaponry. Someone has to go around collecting debris before it becomes a problem, and these people are essentially magical garbage collectors, performing a dirty, underpaid job at the bottom of the social heap.

Except maybe debris isn’t quite what everyone thinks it is…

There you have it, that was the Big Idea. Industrialized magic and a mystery at the heart of the world. But you know what? That’s not what the books are about.

I love Big Ideas, I’m addicted to them. But I’m learning that ideas are all well and good, and they might be the creative spark that drives you to write a story or even read one, but they are meaningless without the personal.

Let’s backtrack a little. There was stuff happening in my life while I developing this Big Idea. My husband lost his job in nasty, stressful circumstances. That kind of thing can hurt a person. It knocked around his sense of identity and self worth, and of course I felt every blow.

In Debris, the first book in the Veiled Worlds, the main character, Tanyana, loses her job too. She starts the book as a highly skilled pion binder, at the top of her profession, but by the end of the first chapter she’s lost her skills and her employment, and is forced to become a debris collector. The very lowest rung of society. Her struggle to reestablish a sense of identity and, ultimately, find purpose in her life again, that’s what this trilogy is about.

Thing is, that just kind of happened. Unplanned. Maybe there was some part of my writerly brain figuring all this stuff out – I’d like to think so. But I was so fixated on my Big Idea that I didn’t notice the personal weave its way in and around the telling. Only while I was working on the third book, Guardian, and trying to work out what the point of this whole trilogy thing was, did I understand.

Each book in the Veiled Worlds trilogy explores a different aspect of that original Big Idea. Guardian is about gods. When magic is technologized and no longer spiritual, what role do gods, demons and the figures from myth play? Do they become nothing more than quaint morality stories to teach children, or cultural symbols institutionalized by government? Or is there a hidden truth behind the legends? And, most importantly, if you were one of those figures from myth, marginalized and forgotten in the modern age, how would you feel?

What if you sacrifice everything to save the world over and over again, but no one believes in you anymore? What does that do to your identity? Your sense of purpose?

So you see, that same, deeply personal struggle found its way into Guardian too. Only this time, it’s not just Tanyana trying to work out how to keep her sanity and pay the rent. It’s forgotten constructs, abandoned people and lost ‘gods’ (or whatever we should call them) all fighting for identity and a reason to be.

The personal journey from loss of identity to reestablishing purpose is central to the entire trilogy, and intricately connected to the Big Idea. Industrialization and modernization are about just this same kind of change – a broad loss and rebuilding of social identity.

Which all sounds awfully fancy. But really, it happened almost by accident. I just wanted to see what a world with industrialized magic would look like, and then my husband lost his job, and they joined forces to make a story. The Big Idea, and the personal.