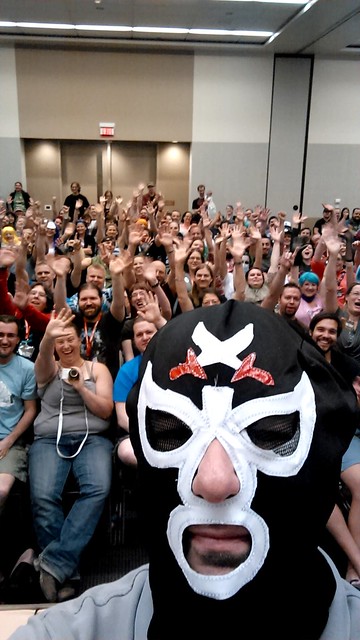 Well, one, clearly, at some point at Phoenix Comicon I was in a luchador mask in front of a whole bunch of people. You know, as you do.

Two, Phoenix Comicon continues to be one of my favorite “comic con” conventions, in part because it has a robust author track, which means a) lots of authors, including people who I really like hanging out with as humans, b) the panels tend to be interesting and more than the basic sort of “writing/publishing 101” panels that large conventions often feature. The only real drawback to the convention is that it takes place in Phoenix in the summer, and walking out on the sidewalk makes you understand what it’s like to be a vampire in the daytime. But fortunately most of one’s time is spent indoors, away from the demon daystar.

Some highlights of the convention:

* I attempted stand-up(ish things) for my part of the Paul & Storm & Rothfuss & Scalzi concert, which included a special guest spot by Amber Benson, who has rapidly become one of my favorite humans. If you missed it before, there’s Youtube documentation here. I was happy with it — it was the first time just trying to do comedy right off the cuff and off the top of my head, so bits are rough and there are places where I think my timing was off (to be clear, I knew what I wanted to say and had prepped beforehand, but I didn’t take any materials with me on stage as prompts), but for a first time? Could have done worse. I would be happy to try it again. It helped that the Comicon audience was pretty forgiving. So if you were in that audience, thank you.

* The luchador mask was part of the “Author Batsu” game, hosted by Sam Sykes, in which me, Myke Cole, Aprilynne Pike, Chuck Wendig, Deliah Dawson, Pat Rothfuss and Leanna Renee Hieber tried to avoid laughing while Sam tried to bust us up. If you laughed, you had to consume a spoonful of salsa (which ranged form mild at first to “oh my god I’ve cauterized my throat” at the end). I laugh very easily. I ended up consuming roughly a jar of salsa. It was funny at the time. Later, no so much so, and that’s all I’m going to say about that. I will say that by the end the authors were trying to crack each other up, which made Sam’s job easier. This was apparently one of the most talked about panels of the whole show, so at least I didn’t suffer in vain.

* I and Elizabeth Bear and Beth Meacham and Lynne Thomas did a panel on the life and times of Jay Lake, and none of us, on the panel or in the audience, I think, got through it with dry eyes. Which was expected, I suppose. But it wasn’t a sad panel, in the main, because in the main Jay wasn’t a sad fellow. We told a lot of happy and funny stuff as well. Jay was Jay. I was told afterward that the programming folks checked with Jay to see whether he was comfortable with a valedictory panel while he was (at the time) still alive; he gave it enthusiastic approval. This makes me happy.

* Plus I got to hang out with a whole bunch of friends, writers and otherwise — and Krissy came along with me for the first time this year, which made it especially awesome. Really, just a fun time all around.

And now I’m at home for more than a month! Honestly I don’t know what I will do with myself. Maybe write some more in this book I’m supposed to be doing. Hey, there’s a thought.