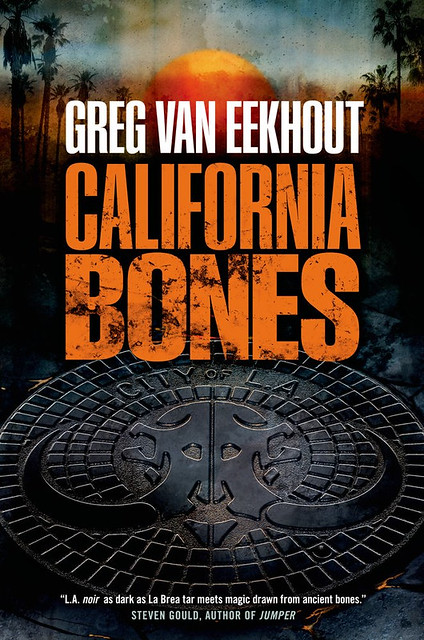 Los Angeles is often seen as a magical city, but it’s never been magical in quite the same way as it is in California Bones, the latest novel by Greg Van Eekhout. Here it’s dark and noirish and sinister in all the good ways — and yes, before you ask, not only did I like the book, I gave it a cover blurb. Here’s Greg to give you a glimpse of how California Bones came to be.

Wizards get their powers from eating the remains of extinct magical creatures, and the La Bra Tar Pits in Los Angeles are a particularly rich source of such remains. There, osteomancers have retrieved the preserved skeletons of mammoths, dire wolves, Colombian dragons, American wyverns, Western griffins, and suchlike. Eat the creatures’ bones, get its power. Eat an osteomancer who’s eaten the creature’s bones, and you get not just the creature’s power, but remnants of whatever the osteomancer has eaten before.

That’s the basic premise of California Bones, the first volume in my osteomancy trilogy, and much like the bones, the idea came right from the tar pits. I grew up in Los Angeles, and I don’t remember a time when I didn’t think the tar pits were the most amazing things in the universe. Ponds of dark, bubbling, eldritch goop lurk in the middle of town, and concealed by the goop are the bones of some of the most charismatic megafauna that ever walked the face of the Earth. And that’s not even made up. It’s for reals. And it’s awesomely weird. All it took was a bit of a nudge to push it over into fantasy.

I wanted to write about a place where the tar pits were the de facto center of the city, where the Los Angeles that grew up around them matched their weirdness. I drew upon the Venice canals, built in 1905 by Abbot Kinney to replicate Venice, Italy, complete with gondolas and the whole works. In my version of LA, the city’s chief hydromancer, William Mulholland, has grown the canals into a major transportation network and expanded them to form a mandala of churning hydraulic power that generates a magic to rival that of the osteomantic bones. Disney’s theme park pumps an extract of unicorn horn in the air to make visitors feel like they’ve come to the happiest place on earth. Griffith Observatory, the copper-domed landmark building overlooking the Los Angeles basin, is a royal palace. Tito’s Tacos is still Tito’s Tacos. Likewise, Roscoe’s Chicken and Waffles. I wanted readers familiar with LA to take pleasure in how I’ve altered things, and those who aren’t familiar with or don’t particularly care about LA to still find it interestingly strange.

I wanted to write about all these things. So I wrote a short story. Because novels? Novels are hard. Who writes novels? Weirdoes write novels. And when I was forming all these ideas, I wasn’t yet that kind of weirdo. The result was “The Osteomancer’s Son,” which appeared in Asimov’s, and if you want you can listen to a very fine podcast version at the venerable PodCastle. Long after the story was published, ideas and the world and the characters kept scratching at me, and I took that as a sign that maybe I wasn’t done with them yet. I was also encouraged by a non-dismissible number of people who told me they wanted more. There was even a Hollywood nibble that ultimately amounted to nothing but at least made me feel shiny for about a week. So, when I finished the second of two middle-grade novels I was contracted for, and I wanted to spend some time writing stories about adults who use adult language and find themselves in adult situations, the time felt right to step into the tar.

If you decide to give California Bones a try and end up liking it, I can tell you that you won’t have to wait long for the rest of the trilogy. Book 2, Pacific Fire, is scheduled for January 2015, and Book 3 is already in my editor’s hands. Along the way, there’ll be dead seas, evil twins, sabotage missions, scams and heists, catacombs beneath Beverly Hills, a patchwork dragon, scary children, palace intrigue, family legacies, and tacos. These are the things. I had a lot of fun writing about them, and I hope you enjoy some of the same things I do.