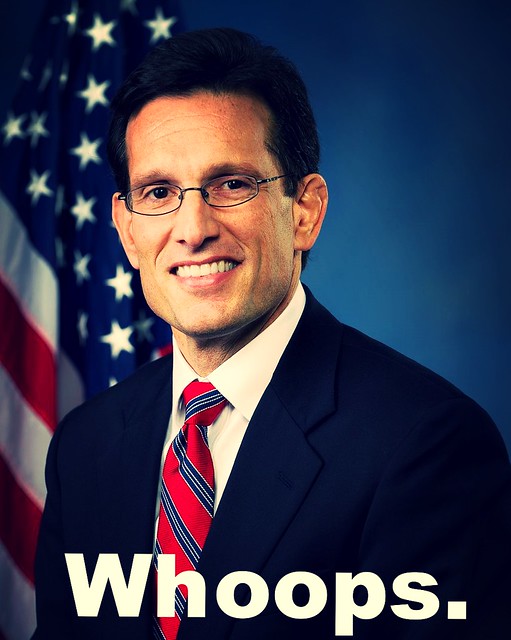 I mean, yes, he wanted to be Speaker of the House one day, but you actually have win your primary elections to do that, and Eric Cantor didn’t. So, a-lobbying he will go, almost certainly.

Much is being written about the meaning of Cantor’s defeat at the hands of an unheralded primary challenger, but to the extent that I know anything about this particular election — which means what I’ve read since roughly nine pm last night — it appears that Cantor’s challenger David Brat won without a lot of money or indeed any real help from any group at all. Which suggests that Brat won the old fashioned way, i.e., by being the candidate the voters who went to the polls actually and natively preferred (or at least preferred over Cantor). Conversely, it seems that Cantor was so busy planning for his next job that he was forgetting to do his current job, at least to the pleasure of his primary voters.

If that’s indeed the case, then what we have here is a vote decided on job performance, where money and outside influence was not a hugely mitigating factor. In which case, party on, Republican primary voters of Virginia’s 7th district. You did what you were supposed to do.

Mind you, I’m not personally deeply thrilled with their choice of Mr. Brat, whose positions as I’ve read them seem primarily tuned for conservative populist stupidity. But then, I wasn’t deeply thrilled with Mr. Cantor’s positions and actions, either, which were also tuned for conservative populist stupidity, with a saucy soupçon of grasping, amoral personal opportunism thrown in for flavoring. But I’m not in the Virginia 7th, so literally, my vote doesn’t count. I suppose I could get worked up about the House and the GOP moving ever so marginally further to the right because of this, presuming Mr. Brat wins the general election (which seems a reasonable bet to me), but given that that for the past four years the House GOP’s strategy has been “oppose everything, do nothing,” from a practical point of view I’m not sure there will be that much of a difference in how things work in that wing of Congress. So.