Because I think it will be interesting to do so, and because I think this sort of transparency might even be useful: Here’s a disclosure statement of past and current business relationships that I have, that I can publicly announce at this moment (there may be business relations I cannot yet disclose for contractual reasons; those will be announced when possible). “Business relationship” in this case means an employee or contract relationship, or a freelance relationship that went beyond single, discrete pieces of work (like a short story or newspaper/magazine article). This list is current as of January 4, 2019; I’ll update as necessary.

* Macmillan Publishing, through its imprint Tor Books, who is my primary fiction publisher in North America. Tor UK, a part of Pan Macmillan, publishes many of my books in the United Kingdom. Also Tor Fischer in Germany.

* Subterranean Press, who publishes my limited editions and other specialized work.

* Amazon, through its audiobook subsidiary, Audible.com, who is my primary audiobook publisher.

* The Orion Publishing Group, via its imprint Gollancz, who is one my UK publishers.

* Random House, via its imprint Heyne, who publishes several of my works in German.

* Gunslinger Studios, whose game Exiles of Embermark I am helping create.

* The Los Angeles Times, where I am currently a “Critic at Large.”

* Working Title Films, which has optioned my novel The Collapsing Empire.

* Netflix, which has optioned Old Man’s War, for which Madhouse Entertainment and Jon Shestack Productions are attached as producers. Netflix also produced (with Blur Studios) Love, Death + Robots, which featured adaptations of three of my short stories.

* Aside from Heyne and Gollancz, I have business relationships with more than 20 other publishers around the world for foreign translations of my work.

* NBCUniversal and MGM: I was a creative consultant for the TV show Stargate Universe, produced by MGM and airing on the Syfy network. Additionally NBCU had optioned other work of mine, including Old Man’s War for development as a TV series.

* Paramount Pictures, which held the film option on my novel Old Man’s War.

* Baker & Taylor: I wrote and contributed to books offered by its Portable Press imprint.

* The Penguin Group: I wrote books published by its Rough Guides imprint.

* The Walt Disney Company: I worked on a project covered by an NDA.

* AMC Networks: I wrote a column for its Web sites.

* Ziff Davis Media: I wrote reviews and columns for its Official US Playstation Magazine.

* Legendary Pictures, where my novel Lock In had been optioned for a television series.

* Industrial Toys, with whom I worked on its video game Midnight Star, now owned by EA.

* 21st Century Fox, via its FX network, where my novel Redshirts had been optioned for a television series.

In addition, I ran a writing/editing business called Scalzi Consulting, which undertook projects for various clients, including Sullivan & Company (a marketing group), Network Solutions, US Trust, Oppenheimer Funds and Warburg Pincus. Scalzi Consulting is currently dormant as I focus on fiction. 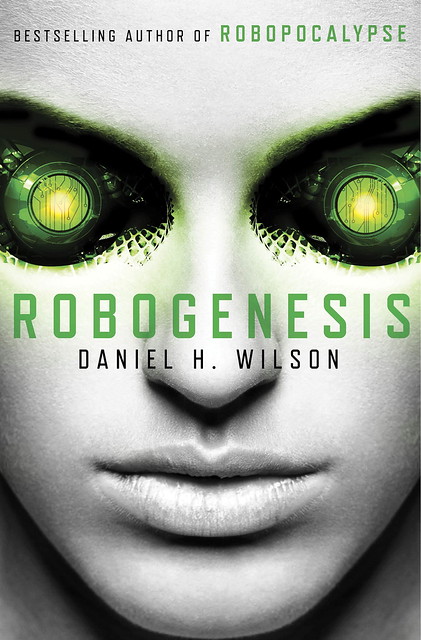 Look out! It’s a robot uprising! Yeah, okay — but what then? That’s what Daniel H. Wilson was wondering in Robogenesis, his sequel to the massively successful novel Robopocalypse. Does he have answers? Find out below.

Recently, I was talking to an older engineer-type gentleman at a cocktail party and trying to explain my career path from scientist to science fiction writer. In the middle of the conversation, he blurted out: “Wait, you’re telling me that you wasted ten years of your life!?”

He kind of had a point.

Despite ten years spent studying robotics, the most technologically advanced project I have worked on in the past year is a pretend space ship simulator in my basement – for my kids, I swear. Don’t get me wrong, the S.S. Coraline Wilson required the wiring of buttons and the scripting of space simulation software, but no machine learning algorithms or articulated arms were employed.

Even so, I don’t think I could have written Robogenesis without spending a decade in the trenches, desperately trying to learn math and science.

The biggish idea behind Robogenesis is that I did my best to realistically consider how human beings might survive a war between multiple titanic artificial intellects.

On its surface, Robogenesis is a thriller – a novel that follows regular people (and a few robots, and some in-betweens) who are fighting and surviving in a world transformed by the collapse of technology. There are no equations or Hidden Markov Models or Monte Carlo methods in Robogenesis, yet the story and its players are deeply rooted in what I have learned about how machines think.

Unlike creatures in the natural world, fellow members of an AI species do not form a natural class – each one may be radically different from the next, depending on what architecture they were built on and which datasets they were trained on. The AI may have completely different priorities when it comes to interacting with humankind. Was the machine even designed to interact with people? Or is it a deep thinker, built only to probe the mysteries of the universe? Would the machines try to manipulate us, ignore us, or eradicate us (as I considered in the Big Idea I wrote for Robopocalypse in 2011)?

So, my job writing Robogenesis was simple: just describe god-like artificial intelligences with truly alien perspectives and devilishly complex motivations. Oh, and I needed to make it damned realistic, because if I have anything unique to offer to this trope it is my perspective as a former roboticist.

I began by looking at the current state-of-the-art.

As you know, we already live with a lot of low-profile artificial intelligence. When you speak to Siri on an iPhone, your voice is sent to the cloud, processed by AI algorithms, and the translation returned. Facebook has AIs that sift through your photos and perform face recognition. Google’s AIs read your gmail and target ads accordingly. At the airport, whole body scanners literally see us naked and then an AI decides whether to pass on the image to a human screener.

(Yes, the robots see us naked.)

I extrapolated these trends into the future, ignoring the simplistic scenario in which a haywire AI wants to kill all humans. Instead, I considered what happens when really complex, incredibly disparate, and potentially bizarre artificial intelligences proliferate across the world’s technological infrastructure?

As I wrote Robogenesis, it dawned on me that an “apocalypse” is not really the end.

When we say apocalypse, we usually mean the fall of civilization (aka “the end of life as we know it”). But every new technology alters life as we know it. Automobiles, phones, computers, TV, the Internet – all have radically changed society and life as we knew it.

We all live through a mini-apocalypse with every new technology that is introduced. The disruptive effect of technology is so pervasive throughout history as to be a part of the human condition. Civilization has been under assault since its inception, and we have always found a way to survive.

In Robogenesis, I tried to take this basic human struggle to a frightening next level – pushing my characters to the limits of their ingenuity as they struggle to adapt to powerful sentient technologies. Only time will tell if I succeeded, but I sure do hope that those ten years in the trenches were worth it.