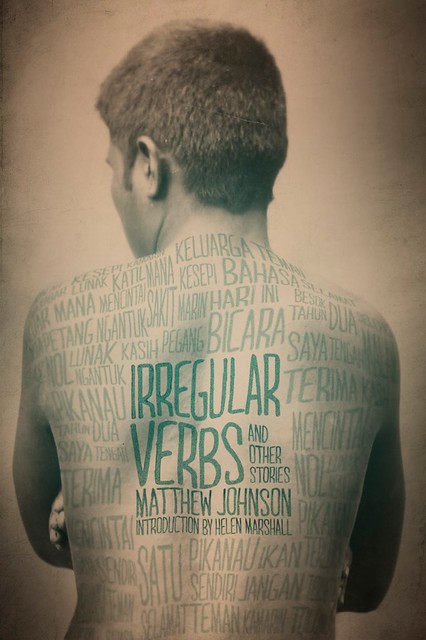 Matthew Johnson writes short stories and thinks about words apparently quite a lot. Those two enthusiasms collide in his collection, Irregular Verbs and Other Stories, which I read in a pre-press version and was rather impressed with. Below, Johnson muses on words, their provenance, and their power over us.

I’ve always loved the phrase “irregular verbs.” It conjures an image of something you might find at a yard sale or a bargain store, a box labelled One dozen verbs — slightly irregular. Inside you’d find a collection of words you’d never seen before: all of them weird, broken or misshapen in its own way, different not only from those regular verbs we use every day but from each other as well. What writer could resist?

To language nerds like me, though, irregular verbs are plenty interesting on their own. English has a lot of them — possibly more than any other language — and despite their name, they aren’t weird, rarely-used words that have survived due to obscurity. Instead they’re the most common verbs in our language, the heart of English: to be, to run, to sing, to fight, to grow, to read.

Unlike some other unusual features of English, like its vast vocabulary, irregular verbs aren’t a result of its tendency to assimilate undigested lumps of other languages. Instead they’re linguistic coelacanths, living relics both of the earliest roots of English — most English irregular verbs preserve what was the regular form of conjugation in early Indo-European languages, which was by changing the middle vowel sound of the word — and of the diversity it once had, now mostly lost to the printing press and mass media. In Chaucer’s day verbs, plurals and adjectival forms varied widely between different regions, cities, and even families, but by Shakespeare’s time we can already see a selection process happening: eggs winning out over eyren and kine giving way to cows. The rise of nation-states had something to do with it, too: “a nation is a language with an army,” as the saying goes, and if you want to have one nation then you need to have just one army and just one language.

Irregular verbs have to resist a more fundamental force as well: regularizing verbs and plurals is actually hard-wired into us, a basic part of how we develop language. Every mother and father has seen their children go through phases of first under-regularizing verbs and plurals and then over-regularizing. These mistakes, like goed, foots and boxen, can be such powerful symbols of childhood that we keep using them long after our children have learned the “correct” forms — private jokes that reaffirm our love by reminding us, parents and children both, that you were once my baby.

My own family had a rich dialect of words like these, from a variety of sources: over-regularized words (“gruntled,” an imaginary antonym to “disgruntled”), pronunciation errors (“squiddles” for squirrels), folk etymology (“hard work store”) and references to shared culture (“grundoon” for groundhog). This, in a roundabout way, is how I had the idea for the title story in Irregular Verbs and Other Stories: thinking about the way families, friends and couples develop their own private languages and imagining a place where this process is so accelerated that new languages spring up like mushrooms — and imagining what it would be like when someone you loved died, and the language you shared died with them.

Except that’s a lie. Or at least a simplification, the where-do-you-get-your ideas version of how the story came to be. The truth is that while it does have a Big Idea in it, it was just as much the product of a bunch of little ideas. There was the idea of “catching” a language, inspired by the famous William Burroughs line about language as a virus; an Indonesian phrasebook I had bought ten years before (part of a collection of phrasebooks and dictionaries, the crown jewel of which is a text on how to learn Haitian Creole that includes useful phrases like “He’ll die for sure this time” and “They beat the man so hard he soiled himself” and which illustrates the simple past tense with the sentence “He looks at the man’s head. He pulls out his machete; he strikes; he cuts it off”); even the pattern of the linoleum on the floor of my wife’s grandfather’s bathroom, which inspired the village in the story where people’s houses each have a private floor, where they’re free to speak their own languages, and the public floor where everyone takes part in the daily conversation that keeps their common language alive and intelligible.

Most of the stories in the book have similar origins. “Lagos” was inspired by a book about the World Bank, a New Yorker article, and email spam; “Long Pig” by a restaurant review and an unusually solicitous waitress; “Public Safety” by an article on fingerprints and a high school history lecture on the secret history of the metric system. The characters in them are similarly bad fits for their times and places: Inspector Louverture in “Public Safety,” the half-Haitian detective in a society where racism is science and reason is law; Safrat, the telepresence worker in “Lagos” who spends her days running vacuum cleaners half a world away, and tries to ignore what they whisper in her dreams; Geoffrey, the refugee from ancient Rome whose job is to help his countrymen adapt to life in 21st-century Canada, in “Another Country”; Sendiri Ang, in the title story, who risks isolating himself from his people and family to keep his wife’s language and memory alive. Like all of us, and the languages we share, the stories and the people in them are made up of odd parts — taken from a box of irregular verbs.

Visit the book’s page at ChiZine, which includes eBook samples. Visit the author’s blog. Follow him on Twitter.