Turns out he has a few cogent reservations. I would agree with them.

Relatedly, I suspect it would surprise a number of people to know I don’t have a philosophical issue with gun ownership. Own them if you like; please take substantial training with them and learn to operate them responsibly, since they really are designed to kill things, including people. I live in a rural area that has a large amount of gun ownership; on many evenings I can hear my neighbors having target practice. There’s never been a problem. I prefer a bow myself.

Likewise, gun ownership, sensibly practiced, as part of (but not solely comprising) an overall security regimen? Sure. Keep the weapon instructor’s reservations in mind; he has experience on the matter. There are lots of ways that introducing a gun to a self-defense situation can go very wrong.

On the other hand, gun as fetish object? Creeps me out. When I see a picture of some dude hoisting some big damn gun about, often with appallingly poor trigger discipline, the first thing that comes to my mind is not look out, we have a badass on our hands, but, rather, here’s a dude who’s afraid of every fucking thing in the world. The big damn gun is like the eyes on the wings of a butterfly or a pufferfish sucking in seawater — a way to look bigger and maybe not get eaten. By whom? By whomever, man, I don’t know — when you’re afraid of every fucking thing in the world, I guess you spend a lot of time worrying about getting eaten.

So wait, are you calling me a coward? I hear some of these dudes saying, hoisting their guns. No, not a coward. Just afraid.

I’m not afraid! I have a big damn gun! Yes, well. Whatever makes you feel not afraid, chuckles.

You wouldn’t be saying that if I were in front of you, with my big damn gun! Indeed, I probably wouldn’t, because when people who are afraid of every fucking thing in the world wander about with big damn guns, bad things have an increasingly likely chance of happening. I’ll just go have lunch in Chipotle until you wander off, if it’s all the same to you.

Knowledgeable about guns? Sweet. Geeked out about guns in all their varieties? Hey, everyone’s a geek about something, and this is one of your things. Rock on. Wanting to share the joys of responsible ownership and use of guns with others? I am all for positive role models with these particular machines. Please do. Have to display yourself with your guns and/or can’t bear to part with them for a moment? Dude, you’re afraid of every fucking thing in the world.

I’m gonna be thinking that every time I see that picture of you with your big damn gun. I doubt I’ll be the only one. 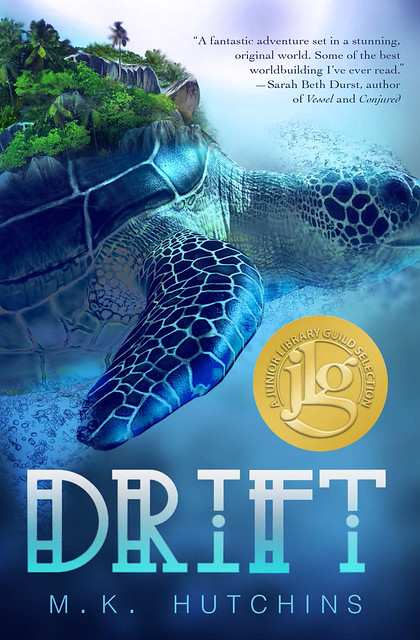 Worldbuilding is complex enough when you stick to some commonly-accepted fundamentals, like, oh, let’s say, land. What happens when you decide to shake up those fundamentals? M.K. Hutchins decided to make an aquatic change-up in Drift, and the results of that choice surprised even her.

10,000 B.C.E. was not a good time for the Natufians — or, more specifically, the stands of wild cereal that they utilized for food. A shift towards a drier climate yielded fewer plants. So the Natufian changed, too. Instead of just gathering, they began clearing other plants off the land and scattering the seeds of rye, wheat, and barley. Over time, artificially selecting plants with desirable characteristics led to domestication — the greatest genetic engineering projects humans have ever undertaken — and to an agricultural lifestyle.

Okay, that’s a gross simplification of an exciting time in human history, but it’s a story that still fascinates me. Human culture changed because of the environment, and that environment in turn was drastically altered by human culture. Exploring way culture and environment interact — or cultural ecology — isn’t something I see a lot of in fantasy novels.

Completely reshape the environment — throw in magic, dragons, or some liches — and society still tends to look a lot like pseudo-Medieval Europe. Don’t get me wrong; there are outstanding books written in look-alike Earth analogues from all over the globe. I’m glad I get to enjoy them.

But if physics, if the laws of nature themselves, were different, wouldn’t we expect culture to be radically different, too? Often in worldbuilding it seems there’s an emphasis on physics-building and a dearth of culture-building.

When I first heard a professor talk about how the Maya envisioned the world on the back of a turtle surrounded by a watery hell, I knew I wanted to write a story inspired by that setting. Watery hell sounded fun. And instead of one great turtle, how about a bunch of drifting turtle-islands, all competing with each other?

But physics-building alone didn’t feel right for this story. My mind latched onto cultural ecology. How would this different environment shape culture?

Small islands would need to be fast to avoid larger islands that could conquer them. Heavy populations would slow them. But an agrarian society would need children — especially to care for the current population when it aged.

From here, the culture-building took off. Marriage, children, and romantic love all became stigmatized things of the poor. Married men, especially, were mocked for not being able to support themselves but having to rely, eventually, on their own children for support. Skilled artisans adopted apprentices instead of having children themselves, and the Handlers — those that fought hellish monsters and ruled the islands — set up a tax system to care for their elderly members.

I loved having not just the inherit conflicts of surviving on an island surrounded by monster-infested waters, but abundant social conflict. I loved setting up the three different systems for end-of-life care (farmer, artisan, and Handler). This left me with different classes of people, and different attitudes in those classes. I could have Handlers who were haughty and Handlers who pitied the poor for lacking the magical or mundane talents to become a Handler or artisan, respectively. I created farmers who honorably delayed marriage, and farmers who struggled with the stigma of being from a large family. Into the middle of all this, I threw my protagonist, a young man still deciding who he wants to be as he’s figuring out the way his world works — both physically and socially.

There’s lots of physics-building in my new novel, Drift. But it’s the cultural ecology — the integral way physics and culture interlink — that got me excited about this story.