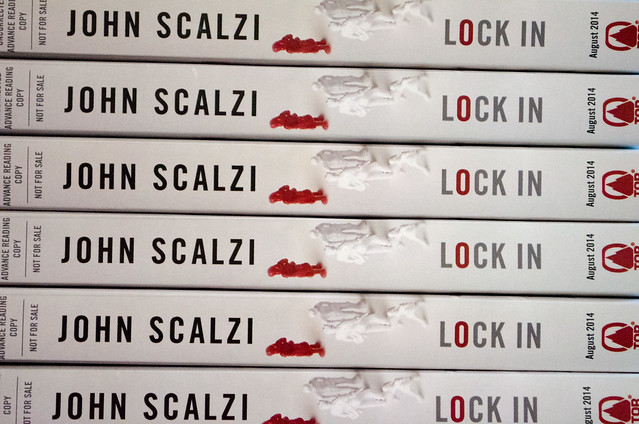 Tor has sent along to me seven ARCs of Lock In. Six of them are already claimed by various people I need to send a copy along to. One of them isn’t. So, I’ll give it away here, now. Here’s how to get it:

I’m thinking of an animal right now. Tell me which one it is.

I’m looking for a specific species. Just saying (for example) “bear” will not help you.

The first person to correctly identify the animal I am thinking of wins the ARC. I will also sign, personalize and ship the ARC to anywhere on the planet.

Any hints about the animal? Yes! It’s a chordate. Any non-fictional chordate, alive or extinct, is within the realm of possibility.

How do we know you won’t lie about which animal you’re thinking about? Because I told the animal to my daughter just before I posted this, and she’d let you all know if I lied to you. Also, after telling her the animal, she said “no one’s going to get that.” But she doesn’t know you like I do, oh Whatever readers.

What happens if no one gets the right animal? Then I will randomly select a winner. So no matter what someone’s getting out of here with an ARC.

So: What animal am I thinking of right now? Give your best guess in the comments.