Is it just me? Or does it seem that way to anyone else, too? 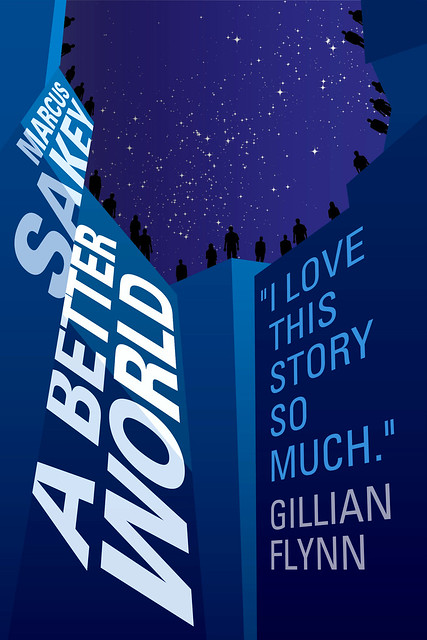 Maybe you don’t lie awake at night, wondering what it would take to break the world, but that just means you’re not Marcus Sakey. His new novel A Better World (the sequel to Brilliance, which is itself headed to the big screen) explores what it takes to grind things to a halt, and to throw life quickly out of balance. And what does it take? Well, as Sakey explains, the real question isn’t what does it take… but how little.

What would you do if there was no milk on the shelves?

Take a moment and honestly ponder it. If you run out of something, you go to the store and replace it. That’s part of the modern social contract. You need bacon? Diapers? Medicine? Get in your car, swipe some plastic, and those things are yours.

But what if out of the clear blue sky you could no longer depend on that?

That’s one of the central questions I wanted to explore in A Better World. The book is the sequel to last year’s Brilliance, a novel about an alternate present in which, since 1980, one percent of people are born savants. At first the ‘brilliants’ are a curiosity; then a concern; and finally, as they exceed the rest of us in every field, a source of incredible social tension. One percent of the world is now objectively better than the rest—but they are outnumbered 99-to-1.

The first book set up the looming conflict, the cliff on the horizon. With the sequel, I wanted to walk up to—and maybe over—the precipice. But that walk was the point. See, most dystopian novels begin after the apocalypse, when the world has already changed in fundamental ways. I love those books, but I wanted to write one about society falling apart; an exploration of how small failings can splinter the larger whole.

First, I had to figure out how it would happen. I love this kind of research—it’s one of the reasons I write. To make sure my details are accurate, I’ve shadowed gang cops, trained with snipers, gone diving for pirate treasure, held a human brain, and even been pepper sprayed on television. (Seriously: check it out).

In this case, I went to the crazies. Sorry—the survival enthusiasts. There are a surprising number of people who spend time preparing for just this kind of scenario. Googling the end of the world is actually a really interesting rabbit hole to lose yourself down.

Anyway, it turns out it’s a lot more plausible than you’d think. Despite the advancements of modern life, our world is extremely fragile. In fact, those advancements are part of the problem.

It used to be that grocery stores had storage space for all kinds of goods. So when the beans were running low, someone went to the back, grabbed another case, and put them on the shelf.

Not anymore. You know the scanner at checkout? It plugs into a database that tracks inventory and automatically reorders products as needed. There are no back-up supplies. It’s not just grocery stores, either. Pharmacies, manufacturers large and small, even gas stations all work this way. The system is called ‘Just In Time Inventory’, and it’s far more efficient, allowing companies to reduce their overhead expenses and avoid waste.

The problem is that it’s very intricate, and the more intricate the system, the more vulnerable. Break any single gear, and the whole thing grinds to a halt.

Okay, fine. But how do you break that gear? After all, stores are supplied by a vast network from all over the country. There are multiple redundancies, and the nature of the free market means that if one company fails, another is quick to eat its lunch.

The answer, it turned out, was to exploit the complexities of another system. In A Better World, a small group of terrorists hijacks trucks in three cities, and kills the drivers.  (Actually, they burn them alive, because they want to make the strongest possible statement, and they’re, you know, intense.)

As a result, insurance carriers for trucking in those cities immediately suspend coverage. They can’t cover that kind of liability. This would really happen—think of all the flood coverage suspended post-hurricane.

But without insurance coverage, trucks can’t leave the depots. In one night, a group of determined individuals can break the intricate chain that puts milk on your supermarket shelves.

In my case, because I recently had a daughter, and because I really wanted to gut punch my readers, milk isn’t the real problem—baby formula is. The first time you meet one of my protagonists, he’s staring at the empty shelf where the food for his three-month-old daughter normally rests.

He’s staring at it, and he’s wondering what the hell he’s supposed to do now.

And if I got it right, hopefully that’s a question you’ll ask yourself.