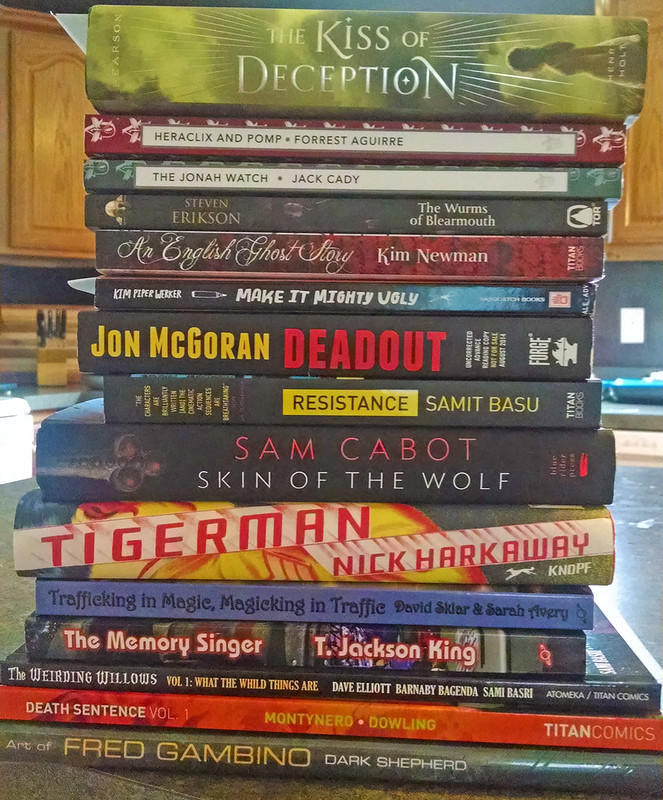 Just in time for the Independence Day holiday: New books and ARCs that have arrived at the Scalzi Compound this week. Let me know in the comments which works here appeal to you.

And now, some thoughts on subjects pertaining to publishing. I’ll use myself as an example for much of this.

1. I am in business with Amazon, though its Audible.com subsidiary. As you might be able to tell by my post yesterday, I am deeply happy with my experience working with Audible (and thus, by extension, Amazon). They’ve been a very good business partner to me.

2. I am also in business with Hachette, via its Gollancz imprint in the UK. I think what Amazon’s doing to US Hachette authors at the moment well and truly sucks. I heartily remind people that just because Amazon has been screwing these authors by making it impossible to buy their books there, doesn’t mean you can’t get those books — pretty much immediately — from all sorts of other retailers, including local bookstores. This might also be a fine time to install a Kobo or Nook or iBook app on your tablet or smartphone and diversify your eBook retailers.

3. I am in business with Random House, through its Heyne imprint in Germany. I have had an excellent business relationship with Heyne and think very highly of the people who work there. You may also recall that last year, when Random House attempted egregious bullshit with the contracts for their digital imprints Hydra and Alibi, I was happy to punch them in the throat for it, because they were trying to screw authors, no two ways about it.

4. I am in business with Macmillan, through Tor Books. As most of you know, I have been very happy with Tor, who treats me very well and who is very supportive of my career; I have the career I have because Tor has done well by me. What most of you may not know is that one major reason there was a three-year gap between Zoe’s Tale and Fuzzy Nation was because Tor and I had a substantial business disagreement, and I chose not to write new work for Tor for a while. The details of that disagreement are not important now — water under the bridge — but it was significant enough that I walked away from the company and worked on other things. Then it was done, we came to an understanding, and now we are working together again, quite happily.

What’s the point to all of the above?

Publishing is a business. As a writer, you are enaging in business with others, sometimes including large corporations. It’s not a team sport. It’s not an arena where there are “sides.” There’s no “either/or” choice one has to make, either with the businesses one works with or how one publishes one’s work. Anyone who simplifies it down to that sort of construct either doesn’t understand the business or is actively disingenuous, and isn’t doing you any favors regardless. The “side” you should be on is your own (and, if you choose, that of other authors).

These businesses and corporations are not your friends. They will seek to extract the maximum benefit from you that they can, and from others with whom they engage in business, consistent with their current set of business goals. This does not make them evil — it makes them business entities (they might also be evil, or might not be, but that’s a different thing). If you’re treating these businesses as friends, you’re likely to get screwed.

(And for God’s sake, don’t confuse being friends with people at those businesses with being friends with the business. I have very good friends at Tor. It didn’t stop me from having a substantial business disagreement with the company. Businesses aren’t your friends, even when they employ friends.)

Sometimes the goals of these businesses will align with yours. Sometimes they will not. And often a company that you’ve found yourself in alignment with previously will tack off on a different course, leaving you behind. Maybe you’ll realign at some later point. Maybe you won’t. If you’re under the impression that any business will always align with your own set of business goals, you are likely missing something. Expecting businesses that are not your own to act in a manner other than their own self-interest is likely to end in disappointment for you.

You’re allowed to think more than one thing about a company at the same time. I like what Amazon’s doing in the audiobook space, especially as it involves me. I think what it’s doing to Hachette authors sucks, in no small part because it happened to me, a few years back, when Amazon had a similar fight with Macmillan. Amazon has helped my career; it’s also made it clear to me that it doesn’t give a shit about my career when its interests are elsewhere. Amazon isn’t the only business partner I have that I can say that about. It’s clarifying, I will say.

Your business relationships are allowed to be complex, entangled and even contradictory. How do I feel about being in business with Hachette and Amazon? I feel fine about it, obviously. Likewise, I feel fine about being in business with, for example, Macmillan and Subterranean Press, both of whom have published the same work of mine, in different formats. I’m in business with a lot of businesses. I’m going to keep doing that, because I like to eat and I know where my ethical lines are. You can do this too. The person to decide what limits you choose to place on your business should be you.

Publishing is a business. I said that already. Guess what? I’m saying it again. If you’re not approaching it as a business, with the same eye toward your own business goals as those you’re in business with undoubtedly have on theirs, then when you find yourself completely at a loss and utterly dependent on the business choices of a company that fundamentally doesn’t care about you outside of a ledger entry, the amount of sympathy you’ll get — from me, anyway, and I suspect from other authors who tend to the business of their writing — will be smaller than you might hope.

Update, 7/10/14: An event relevant to this entry and discussion. 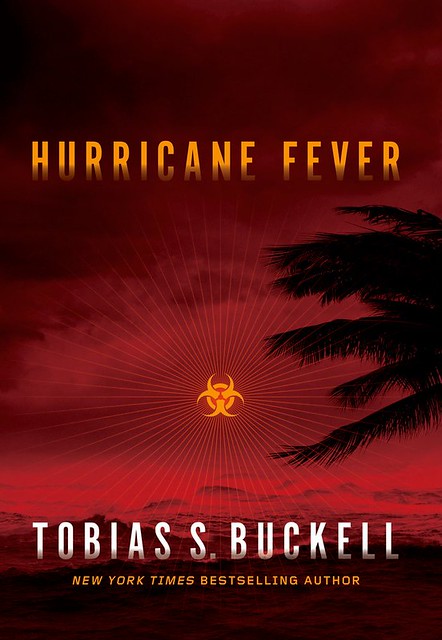 As the first named hurricane of the season wanders along off the east coast of the US, it’s perhaps fitting that today’s Big Idea book is Hurricane Fever, by Tobias Buckell. But the hurricanes of this novel take place further south, in the Caribbean — and that’s where its hero comes from, too. Buckell explains why the latter point is especially important.

When I was teenager my grandfather and I spent a couple months slowly going through and watching the entire James Bond series on VHS tape. At the time I lived on a boat at anchor off St. Thomas, in the US Virgin Islands. My grandfather’s boat, Seven Seas, lay not too far away from us. Every night I’d hop in a dinghy and motor over to my grandfather’s and watch a movie after dinner.

We watched one movie exactly because the 12-volt car batteries linked up in series to make a bank would have been charging all day via a wind generator mounted on the main mast. Any more than one movie, and that bank of batteries would run out of charge for the day. There was another bank that we could switch over to, but that was held in reserve to start the motor only. If it had been a low-wind day, we’d often have to fire up the boat’s engine near the end of the film (which used up costly diesel fuel). My grandfather always kept an eye on the voltmeter during the final third of a movie.

It was a strange thing to watch Bond in action sometimes. Because Bond often came to the sorts of places we were in at that moment, watching the movie. When Bond came to any islands, or any places in the developing world, he was a force of nature. He blew things up, slept with ALL the women, and raced around in boats (that exploded even more). I began to realize that, for the people making, filming, and in some ways writing about areas like my homeland, it was an exotic destination and no more.

I realized that people there didn’t get to have the same adventures. They never got to stand up to the enemies who had penetrated their settings. In many cases, the villain was often of the developing world. So we were a place to visit, a playground, the thing to sleep with (or exploit) and the enemy.

But the islands I grew up on were so much more. I knew that. The islands were a place of beauty and a destination. Sure. There’s a reason tourism is so huge. But damn it, there were scientists and science being done. There were corporations being built. There were cities being forged, culture and food and…

…There were heroes as well.

And there should be fictional heroes as well. Because we should all get to see ourselves out there as heroes.

When the the black-hats get on a megayacht and sail off to aquamarine waters to cause trouble, why shouldn’t a local agent get curious about the mayhem and start digging around?

That is how Prudence James came to be born: my asking that question. Roo, as he prefers, appeared in Arctic Rising, lending a hand to the main character of that novel as she navigated an increasingly hostile ice-free Arctic.

Roo is my answer to the question: where are the Caribbean agents? What about the people who live there? What do they think about all this?

Getting to do so in Hurricane Fever was finishing a promise I made a very long time ago.