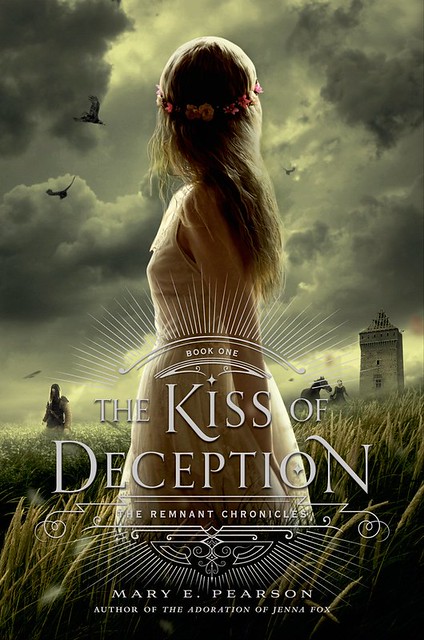 The Beatles once said that love is all you need. This may or may not be the truth, but Mary E. Pearson certainly found love useful and applicable when writing her latest novel, The Kiss of Deception. She’s here now to tell you how love made this particular world go ’round.

I’ll just get this out up front. Love. The big idea is love. Unabashed, unapologetic, sweeping, passionate love.

Don’t tune out, guys. You don’t get a pass here. The ladies may be more verbal about it, and may express it differently, but guys are the far more romantic of the species. Trust me, you are. You love love. You just don’t talk about it as much. Women tend to be more verbal about it because we have to be. Historically, love has always been a riskier proposition for women than men. We need to muse about it. We have far more to lose. It’s a survival thing you know?

All right. Hate. The big idea is about hate too. (Happy?) Because it seems these two are the indestructible duo—the timeless driving forces of the human experience. Kingdoms may fall, stars may implode, suns fizzle out, and monuments tumble, but love and hate abide.

I didn’t pull this out of thin air. Watching the news, watching mistakes repeated, watching people, both men and women, gaining rights and losing them again, seeing the world take two steps forward and two steps back, it made me think about how much the world has changed but also how much it has stayed the same. We repeat history over and over again. Kind of a scary thought. We aren’t that much different than Cleopatra and Mark Antony pining for each other, or Alexander the Great leading ancient armies to conquer other kingdoms.

Together, this dynamic duo become the driving force of my book, under a new moniker—the things that last.

When I first proposed this series to my editor I wrote down about fifteen or so musings that were rambling around in my head aching to become a story. I don’t usually do that, but after having written many books I’ve grown accustomed to the frequent question about what inspired me. Months and years later, often it’s hard to pinpoint just one thing because a lot of inspirations can jump in once you begin writing a book. So obviously for me, there were many ideas that were scrambling for my attention, but the things that last seemed to compliment and encompass them all.

So, now how to write about this. Love and hate and the things that last are pretty big vague things to write about. Shrug. Who cares? Unless they have faces.  Unless they live and breathe and hope and dream, and conspire just like us. It all begins and ends with character.

Enter Lia. A pawn. Used. Powerless, even if she appears to be in a position of influence as a princess in the kingdom of Morrighan. Most importantly, her voice is suppressed. More than anything she wants to speak out and be heard, but her voice doesn’t matter. She is valued for other purposes. And then the most basic right, to marry someone of her own choice, is taken from her. Instead of being forced into a loveless marriage that would certainly be the seal on her silence, she runs.

But Lia is also living in the ruins of a forgotten world where hate, in all its incarnations is rearing its ugly head in the form of power and greed. Three large kingdoms are all vying for power, and even though she tries to begin a new anonymous life, Lia is still caught in the middle of the power struggle. She can’t escape it. The one thing that offers some light to her, is love, or the hope for it.

The story is written from three viewpoints, Lia’s, Rafe’s, and Kaden’s, and I thought it only fair that all three manifest both of these driving forces. We can’t possibly believe it’s only the “other guy or girl” who harbors hate—even most villains want some measure of love—maybe in fact, that’s their problem, they want all of it.

Okay, now cue in the fifteen things I mentioned above—they all play a critical role in the story—concepts of time, oral histories, perfect disasters, dormant genes, vanished cultures, the mysteries we’ll never know, and especially the setting, but they all are seamed in with the big idea. Yes, my head was sometimes exploding.

As I wrote, I saw the sweeping bigness to the hate, its carnage, the immensity and breadth of its reach in all its incarnations of greed, power, and control. It surprised me. I mean, hello, I’m the one writing the story, and this is what I wanted to write about, the things that last, but it made me sad how true it felt. It made me wonder at just what point does any human being stop being able to care about anyone else but themselves?

But there was the love story. It was the balance. Its power seemed so small by comparison. Fragile, intimate, naïve, stumbling, sometimes stupid, but with all the hope of two oceans.

And maybe that’s why it’s one of the things that lasts too.

The Kiss of Deception has been called high fantasy.  I suppose it is.  There are princes, princesses, warring kingdoms, and what is perceived to be a touch of magic. But I will say this, it fits into at least two other genres as well. I guess when you’re dealing with something that spans millennia like the things that last, an author is bound to overstep a boundary or two.