To quote myself: “[B]usinesses and corporations are not your friends. They will seek to extract the maximum benefit from you that they can, and from others with whom they engage in business, consistent with their current set of business goals. This does not make them evil — it makes them business entities (they might also be evil, or might not be, but that’s a different thing).”

Note that Amazon can and may fight this in court. Alternately, it may choose to settle out of court, admitting no wrong, and change its in-app policies consistent to what the FTC wants from them. Which will it choose? I expect whichever one is (all together now) consistent with its current set of business goals.

Via Jim Romenesko, a question from The Billfold Web site about what people’s first jobs were and what they paid, and what that particular job pays now. Romenesko’s spin on the question involves journalism (because his site is focused on that field) and as it happens, that’s where my first post-college job was.

My first job as an adult, as many of you know, was as the movie critic for the Fresno Bee newspaper, a job I started in September of 1991 and left in February 1996. I got the job directly out of college (I was 22, making me the youngest full-time professional film critic in the United States at the time), and it’s not a knock on me to suggest that I was hired not only for my writing skills but also the fact that I could be gotten for super-cheap: My first year salary was something along the lines of $22,400 dollars, or about $430 a week, before taxes, etc.

And how did I live on $22.4k a year? Pretty well, actually. For one thing, I was a movie critic, which meant that a lot of my entertainment cost — i.e., going to movies — was taken care of. Likewise, working at a newspaper meant one could pick over the scads of entertainment product sent for review (books, CDs and so on), so the cost of those was also reduced. Also, I lived in Fresno, which is the butt of many jokes in California, but if you’re a 22-year-old making not a lot, also contained a lot of amenities of a large town (its population was 350,000 then and about 500,000 now) for a substantially lower cost of living than other large cities in the Golden State. Add it all up (plus the fact that I did not have expensive habits, like smoking or heroin), and I did okay for myself on not a lot of cash.

I don’t know how much the position is worth now — currently the Bee has one person, Rick Bentley, as both the film and television critic — but I certainly hope he’s making more than I was when I started. This survey suggests that journalists who enter into the field with a bachelor’s degree (which I did, although not in a journalism-related field) see a media salary of about $28,500 (or did in 2012, anyway). Adjusted for inflation, that’s quite a bit lower than what my $22.4k in 1991 was. Which sucks, but then: Welcome to journalism in the second decade of the 21st Century.

(PS: My very first first job was working at Del Taco in Glendora when I was 16, for minimum wage. I came home every night smelling of lard and refried beans. I lasted about six weeks. That experience as much as anything else in the world convinced me to get an education beyond high school, because, seriously, lard smell, man.)

So: Your first job? Talk about it in the comments, if you like. 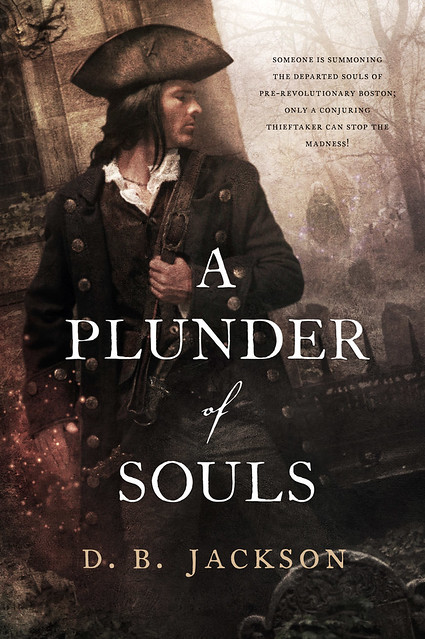 There’s a system to things — especially magic. Why is there a system, and what is its function in telling a story? D.B. Jackson has a few thoughts on the matter, and how it matters to his latest colonial-era fantasy novel, A Plunder of Souls.

Creating magic systems is to writing fantasy what learning scales is to playing guitar or piano. It’s a fundamental, a basic skill that fantasy writers learn early on. Of course every magic system is at least somewhat unique — we all strive for originality when building our worlds and imbuing them with the powers that will become vital tools for our characters as our narratives unfold. But there are certain elemental principles of creating a magic system to which just about every author adheres: make sure the act of using magic carries some cost; place some limits on what magic and those who wield it can do; and above all, keep the magic consistent. Just as we cannot escape the natural laws that govern life in our real world — gravity, conservation of mass, Newtonian laws of motion, etc. — there should be no escaping the laws that govern our imagined systems of magic.

One doesn’t have to read much fantasy to realize that trying to escape the limits we place on our magic systems is just about the only thing our characters do, particularly the villainous (read “interesting”) ones. They seek more power than they ought to have, or they try to escape the costs we’ve so carefully built into the systems, or they seek to create new rules that apply only to themselves. Our heroes are then forced to find innovative ways to stop them, and invariably those heroes wind up bending the rules as well.

Notice I said “bending” and not “breaking.” Because more often than not the ultimate act of heroism lies not in sheer power, but in ingenuity, in finding some unexpected way to overcome the villain within the very constraints of the magic system that the antagonist hopes to evade. It’s a tried and true plot device that one can find not only in books, but also in movies and television, not only in fantasy, but also in science fiction. (Think of Data’s Moriarty on Star Trek: TNG, plying Doctor Pulaski with crumpets and extending his reach beyond the confines of the Holodeck to very nearly take command of the Enterprise.)

In A Plunder of Souls, the third novel in my historical urban fantasy series, the Thieftaker Chronicles, my conjuring, thieftaking hero, Ethan Kaille, takes on a villain who seeks to gather more power for himself than any conjurer ought to have. “Magick” in my version of pre-Revolutionary Boston, exists at the boundary between the living world and the realm of the dead. Every conjurer has a guide — the ghost of an ancestor who was also a conjurer — who helps him or her access that source of power. And so my villain, Nate Ramsey, has desecrated the graves of the recently deceased, placed his mark upon the corpses, and claimed them as soldiers in a ghostly army. With this force, he seeks to prevent others from casting spells, leaving himself as not merely the most powerful conjurer the world has known, but as the one person in the world who can cast spells.

It’s both a familiar idea and a big one. Familiar because it works: authors in our genre have used a thousand variations on this theme to create gripping and compelling narratives. Big because it taps into something central to human nature: the corrupting influence that can emanate from any sort of power. Ramsey is already a skilled conjurer, but in addition to being brilliant, he’s also cruel, a bit mad, and bent on avenging the death of his father.

More, he hopes to bend the laws of nature just as he does the laws of magic, so that his mastery of the realm of the dead will allow him to return his father to the world of the living. He refuses to accept that his reanimated father would be an abomination, something neither living nor dead and certainly nothing like the man who raised him. He seeks to master death, and is so drunk with the notion of doing so that he can’t see beyond the realization of his twisted aims.

It was no accident that I sought to have Ramsey violate both natural and magical law. As I’ve said already, in creating my magic systems I seek to make them elemental, so that they are as constant and inviable as nature itself. Equating Ramsey’s magical ambitions with his desire to resurrect his father reinforces not only the dark elements of his character, but also the worldbuilding I have done to make Colonial Boston into a setting that is both historically convincing and fantastical. I should add here that all of this is happening within the context of a growing movement for liberty within the colonies, and a smallpox epidemic spreading through Boston. It also bears mentioning that Ramsey’s attempts to enhance his power, and the magical battles in which he engages with Ethan are pretty frickin’ cool, if I do say so myself. “Familiar,” certainly isn’t meant to imply “humdrum.”

But the greater point is this: in order to thwart Ramsey’s scheme, Ethan must venture down a path that is nearly as dark as the one Ramsey has followed. He, too, must disturb the graves of the dead and attempt spells that, while still conforming to the established rules of my magic system, test the boundaries of that system in ways that would have been unthinkable to him only a short while before. Even if he succeeds (and you’ll have to read the book to find out if he does), and even if the integrity of the magic system is reaffirmed, there is bound to be a cost. Already, Ramsey’s actions have exposed unexpected vulnerabilities; other conjurers of comparable skill, harboring similar ambitions, might test it further, requiring my hero to be even more creative next time around.

As I say, this stretching of the magic system is a plot device that is at once familiar and effective. It tests our worldbuilding, forces our characters to innovate and grow, and challenges us to take our narratives in directions we might not have anticipated. And that’s why it’s not only a big idea, but also a fun one.