By the time you read this, I will either be at or be very near to Detcon1, this year’s NASFiC (an acronym which, if you already know what it means, suggests you are exactly the sort of geek who will be at the convention already). Once there, I will commence with four days of general nerdery, and I will speak on panels, read from my work, sign books, and DJ what is sure to become the most infamous 80s dancein modern history. Can’t wait.

It does mean that posting here is likely to be sparse through Sunday (the end of the convention), however. As always, in trying times such as these, I suggest keeping tabs with me through the magic of Twitter. The last few tweets of mine are always on the sidebar here, but here’s my actual Twitter page. Keep it open and with you at all times (or, you know, just follow me on Twitter, which is the less dramatic but probably easier option).

Have a good weekend, y’all. 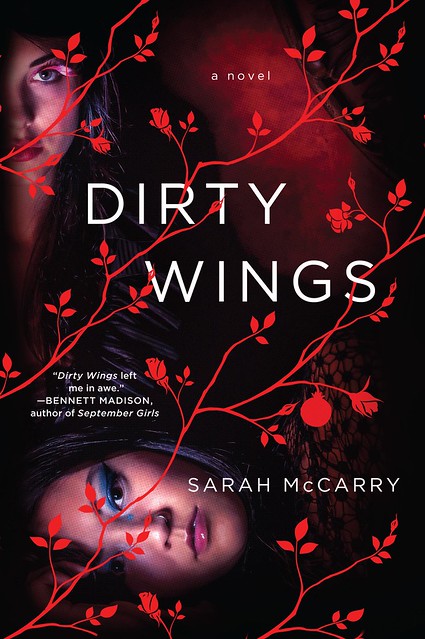 On the road again — or perhaps, on the road for the first time? Sarah McCarry is a writer who perceived a certain lack within a particular narrative trope. Dirty Wings is her attempt to address it; here she is to tell you about it, and the book.

When I was nineteen or twenty I used to drive up and down the west coast like the length of the 101 was a trip to the corner store. I had fallen in love with someone who was good at getting into trouble, and then it turned out I had something of a knack for trouble myself. Out there at the edge of the world with the silvery mass of the Pacific at my feet, a wilderness of stars pricking to life in a darkening sky so big the bright spark of my own life shrunk to nothing—out there it was easy to believe that nothing much mattered, that any want I dreamed up was a reason to keep going, that running away and running toward were only different ways to tell the same story.

We don’t tell girls to set themselves free. My own life, up until the moment I left home, was a more or less ordinary one. I wanted something bigger, but I didn’t have the words to name the shape that size might take. When I was very young, I believed in dragons, thought there was one out there waiting just for me—waiting to pluck me out of the mundane (tormented on the playground, awkward, too mouthy, too smart, not quite right for a girl) and carry me into the fantastic, where the qualities that made me unwelcome among my peers would reveal themselves to be a hero’s gifts. But in a few years I saw that the idea of a story with a girl like me at its center was itself so fantastical that the dragons would’ve been more likely. I hankered after far horizons, but good luck getting there, young lady: the road is no place for a girl. There was a home in the world for clever girls—that I didn’t doubt. But I wanted to be more than clever. I wanted to be bad news.

“When a man steps onto the road, his journey begins. When a woman steps onto that same road, hers ends,” Vanessa Veselka writes in “Green Screen,” her magnificent essay on the lack of female road narratives. The older I got, the more often I met girls who were living the stories I wanted, the stories that taught me how to make my own life in their image: girls who hopped trains, hitchhiked alone across continents, vagabonded through other countries, bicycled solo for thousands of miles, wandered without company through wildernesses. But for the most part, those girls’ stories—our stories—are left off the printed page. We get dragons, sure; we can be sorceresses and princesses, witches and swordswomen, assassins and vampires and robber brides and queens. Sometimes we even get to be monsters. But a girl whose heart’s too big for her body, a girl whose whole self says go out the door and keep going—that girl’s still got to write her own book.

Dirty Wings is about a lot of things: it’s about love and death and music, and it’s about what happens when old stories catch up with new ones—the old story, in this case, being the death-tinted romance of Persephone and Hades. Underworlds both literal and imagined, labyrinths within the heart and below the earth. It’s about the magnificent allure of truly bad decisions, and it’s a little bit about magic, and a lot about friendship. It’s about the wide salt home of the Pacific, and that ribbon of the 101 that’s stitched still, forever, through my heart as much as it is the hearts of the girls I wrote about: Cass and Maia, new friends and twinned spirits on a road trip that will alter both their lives.

But really what it’s about—what it’s about for me, anyway—is being that girl with her eye on the edge of the world, that girl who says yes to all the wild things, that girl teaching herself how to run for the sake of running, choosing the uncertain, writing her own rules. Telling her own story, drawing her own maps. That girl who decided not to wait around for dragons. I wanted a story about girls who made their own trouble, and so I wrote it. Here’s hoping you like trouble, too.