I’m quoted today in this Los Angeles Times piece on San Diego Comic-con and issues of harassment. It’s an interesting article and worth reading if you’re not up to date on the issue. I have a couple of addendums to it which I think I worth noting briefly now (I will have some longer thoughts on the whole subject, but they will have to wait until after this weekend):

* The article notes that SDCC for the first time sent out e-mails to badge-holders pointing out that it doesn’t tolerate harassment. And you know what? That’s an excellent move and a good way to make the point to 100,000+ people that harassment won’t fly at the convention. I have nothing but positive things to say about that. So good on SDCC for sending those e-mails. I should also say I think SDCC is actively thinking about harassment issues this year, both as a matter of course and because others outside the convention (aside from me, I will note, and in a much more publicly active way than I) are making noise about it. That’s good too, and credit where credit is due.

* However, SDCC still doesn’t actually say on its site (or otherwise as far as I can see) what it thinks harassing behavior is. Which is a really big problem in my book — it leaves no guidance for attendees. Not all harassing behavior is as blatant as a grope; attendees on the receiving end of unwanted attention may not be aware that their harassment qualifies under SDCC standards — nor in the absence of guidance may they be convinced, if they feel harassed, that SDCC will agree with them. That’s a huge hole. I understand SDCC reasoning for not offering that guidance, but with due respect for the thinking behind it, it’s flat-out wrong in my opinion. Not having that language makes the convention less safe, not more. It’s the reason you won’t see me at the convention center or on the floor of the show.

* That said, I noted earlier that my event today, which is off campus (it will be at the Horton Grand Theatre at 1:30pm) was affiliated with SDCC in some way. Certainly the tickets to the event note that affiliation: 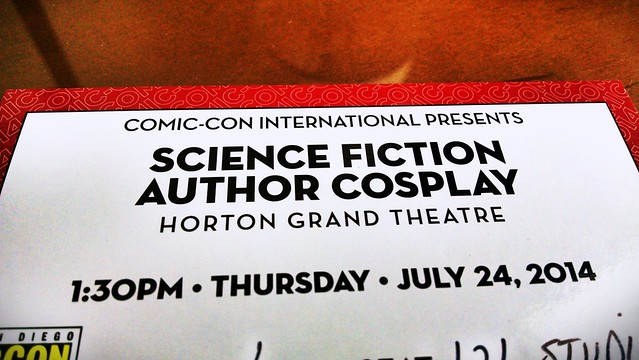 I think it’s better for me to put these tickets on the table, as it were, than have someone else do it. As I noted earlier, doing this particular event off-campus allows me to keep a closer eye on things (or as I wrote previously, “if someone acts like a harassing asshole at my event, I can have them bounced and reported”). I’m very sure SDCC knows my thoughts on harassment, in any event.

* What I hope is that all of this helps to make this particular SDCC the safest one so far — and thus the most enjoyable SDCC so far for a large number of its attendees — and keeps the momentum going for the convention to continue making improvements in this area. As I said earlier, the e-mails are a start, and a start I can applaud. There’s more to be done. 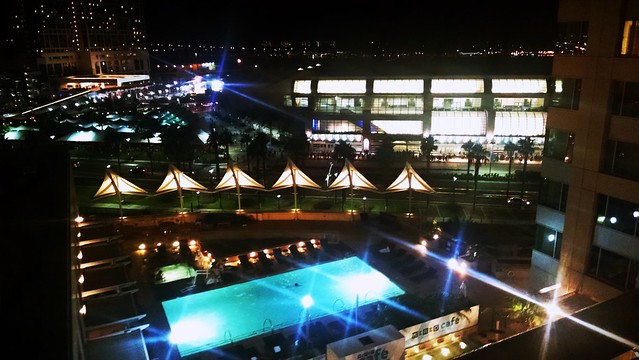 And you are looking lovely this evening.

I am in town. I have signed books for Tor to give away at its booth. I am going to get something to eat, and then I am going to go to sleep, because my brain is still in the Eastern time zone. See some of you, hopefully, at my reading tomorrow (details here). Or later today, since this is likely to go out with an Eastern time zone timestamp. You know what I mean.