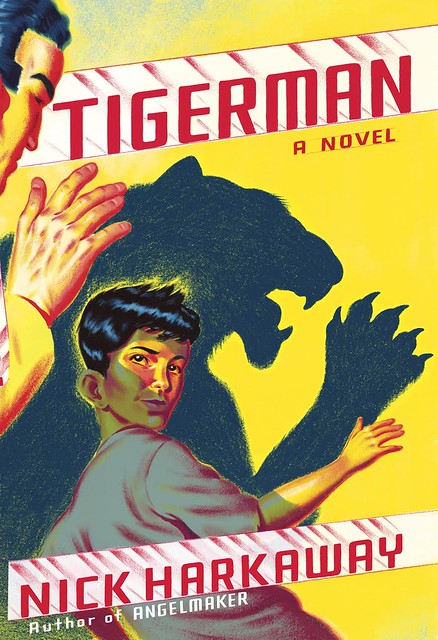 Buckle in, kids. Nick Harkaway, the critically acclaimed, award-nominated, and best selling author of the brand new book Tigerman, is about to get deep on y’all — and also, tell you a little about his new book, which is already racking up envious reviews.

Like Tom Strong in Alan Moore’s comic, I am mostly – I should say “I was” – the sort of person who is more awestruck by the possibility of neurologically gear-shifting a gorilla to create a quasi-human consciousness than by the more common business of having a kid. I mean, lots of people have kids. How many people tamper with the biocognitive structure of a great ape? Am I right?

No. I am not. Because I can not think of anything I have done that is more amazing, more educative, more brain-meltingly overwhelming and physically exhausting, more testing and exciting and rewarding than being a dad. And I am only three and a half years into that project.

I knew it would be this way, too. I knew that I would respond to becoming a father with everything I am, because that is what I do. I’m not great with half-measures. If something comes into my life, that thing has to be accommodated and welded into the rest so that it is part of the landscape, inseparable from what was there before. Everything is contiguous. I write about liminality; I wear it like a pair of sunglasses; I even love it. I do not live it.

So when I started writing Tigerman, before my first child was born, I was anticipating the turbulent, demanding, absolute loyalty of parenthood. I may even have been planning it, feeling my way to the massive shift in priority and self-perception. And that’s where this book has its heart: in the urgent, conditioned, biological, personal need to be a father, and—in the reverse angle—the reciprocal need to have or to adopt a father. To make the father you want, if necessary, from available materials.

I can feel myself, five years ago, reading this if it was written by someone else and saying “I am not sure I give a damn about any of this right now.”

So let me say that I am not dropping something leaden on your doorstep and calling it a balloon. My natural state of arrested development makes me uncomfortable with stories that are only about the heavy stuff. The unrelieved emotional angst of some writing that’s popular at the moment makes me want to go and play Masters of Orion 2 instead of reading. (Which I do, because: vintage video strategy games? My kryptonite.) So interwoven with this serious depiction of human life and the boundaries of love and whatever that I as a Brit am inherently unwilling to talk about anyway, there is a whole other story about a guy who puts on a costume and opens the world’s most enjoyable can of whop-ass on various people who richly deserve it. Because if there is one thing I do like to write, it is an action sequence.

And if you are going to whop, you need badness upon which to do so. Whop without badness is choreography. Fight scenes work when you care, powerfully, about who wins – when to be honest you want to throw a punch yourself. So I made up an island that is basically the nicest place on Earth and poured over it the contents of the cantina at Mos Eisley. Nowhere will you find a more wretched hive of scum and villainy – and these international bastards of mystery, these crooks and spies and torturers and bankers and brokers, who we know without being told are responsible for everything that sucks about the world: this is where they’ve all chosen to come and do the stuff they would be ashamed to do anywhere else. This is the place where they have created a little home for themselves. Here. In this really nice island that has managed, despite all the usual colonial baggage, to be a decent home to its inhabitants, to be the town where you leave your keys in your car when you go into the store.

So yeah, um. I may have gotten a bit geopolitical about it, which I suppose is also a big idea, in the more conventional sense of the term. I do have big ideas about governance and justice in general. But come on: who doesn’t feel that the way the world is run, the jigsaw of governmental and corporate-legal doublespeak that means however illegal something is some branch office somewhere is allowed to do it anyway, whether that’s a chemical company dumping or the NSA and GCHQ listening to our phone calls by offshoring to one another… who does not get angry about that? A government should serve, not dictate. A corporation is not a person unless I can punch it in the face for being a jackass.

And above all: these systems we make, support, empower: they should damn well do what they say on the tin, what they are clearly supposed to do, and not what is permitted by the loosest and most weasely reading of the documents of their instantiation. They should not engineer gaps in their own oversight, in the rules that create them, so that they can do the bad things they are supposed to prevent because that is the easiest way. When, in fact, did we stop reaching for the Apollo Program ethos in every big project, and settle for being Saul Goodman, slipping between the tiles of the global ethical bathroom?

Yah. I get a little heated. And I almost didn’t realize until I wrote this what my big idea was in the book. I feel slightly dumb about that.

This is a book about responsibility. Which is what good people feel, and bad people don’t.

← “The Failure of Flappy Bird”: A Very Short Short Story By Me, in Popular Science
Help Kickstart Uncanny Magazine →