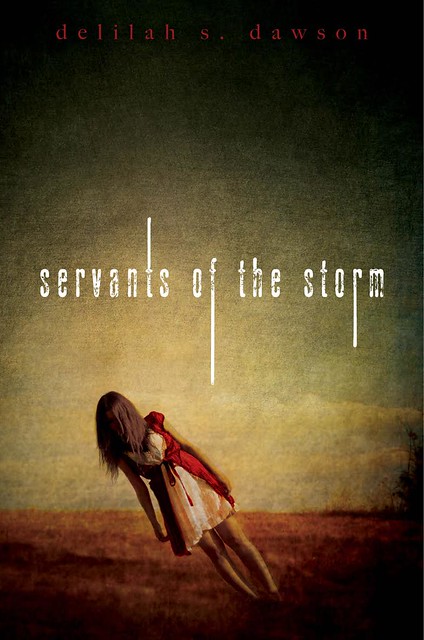 For today’s Big Idea, Delilah S. Dawson is here with her southern gothic Servants of the Storm, to tell you all about the liberating pleasures of the phrase “Hell, no.”

What, you don’t take orders?

Yeah, me neither. I used to, but not anymore.

And neither does Dovey Greenwood, heroine of my Southern Gothic Horror, Servants of the Storm. At first, I thought my Big Idea was loyalty or fighting prejudice in the Deep South, but then I realized that the very root of the entire plot is Dovey’s defiance.

Everyone tells her to take her meds. But one day, because she thinks she sees her dead best friend, she flushes all those pretty white pills down the toilet.

Turns out, she wasn’t on antipsychotics to help her deal with the grief of losing Carly in Hurricane Josephine. Turns out, there’s more lurking around the ruined alleys of Savannah, Georgia than just the usual panhandlers and tourists. Turns out, Josephine is more than just a storm, and now that she’s settled in like a pig in shit, she and her demonic minions want to take everything Dovey has, including her soul.

Once the meds wear off, she’s dead set on finding answers. She stands up to both prejudice and demons and refuses to accept that her destiny has already been determined, even against impossible odds. And one of the reasons I wrote her this way, pig-headed and defiant and suicidally reckless, is because when I was her age, I didn’t say Hell no. I said Yes sir. And it nearly killed me.

I grew up in a house where No wasn’t allowed and Hell no would’ve gotten me smacked and grounded. I was terrified to break a rule, color outside the lines, or speak up when I disagreed. I got all As. I worked thirty hours a week. I did everything I was told to do.

So when I started writing Servants of the Storm and putting together the pieces of the puzzle, the pictures of Six Flags New Orleans after Katrina and the Spanish moss in Bonaventure Cemetery and the dangerous neighborhoods where my husband grew up in Savannah, the heroine who emerged was tough in ways I had never dreamed of being, defiant in ways I wish I had been, back then. When my instinct as a writer was to take the easy path and let the story move her along, Dovey ran in the other direction, flicking me off.

The truth is, if I had seen a flash of my dead best friend when I was seventeen, I would’ve rushed home for more pills. But Dovey spits her pill out and goes back to wait to see Carly again. She runs down dark, unfamiliar streets chasing a stranger and walks into hell for the chance to save the person she loved most. Sometimes, when I was writing, I felt like I was both Dovey and Carly, like the current me was the brave, strong, tough girl willing to break the rules while the old me, the teen me, was the sad, quiet zombie going through the motions, doing what she was told.

I’m thirty-six now, and Hell no is one of my many indulgences. I would say it’s a battle cry, but it’s more often something I mutter in my head while smiling politely. Nobody can make me do anything I don’t want to do—not anymore. Writing Dovey’s defiance was like looking back to the girl I was and giving her the strength I never had. Every time she plants her feet and refuses to obey, I cheer. Whenever she makes what an adult reader would consider a stupid mistake, I’ll defend her. Because it’s her mistake, and she owns it… and usually pays for it.

Children are born crying and defiant, and we do our best to quell the rebellion and teach civility and courtesy. With teens, every moment is a choice between Hell no and Yes sir. Part of the escape of YA is shrugging the responsibility off our mature shoulders for a while to recall the sudden fire of disobedience, the thrill of running in the wrong direction, or the butterflies of kissing someone when we know we shouldn’t. If you’d like to step into the shoes of a fiercely loyal girl who makes terrible mistakes for all the right reasons agains the backdrop of a beautifully decaying city, I hope you’ll give Servants of the Storm a try.

Also, there’s a demon Basset hound. If the defiance doesn’t lure you, that should do it.