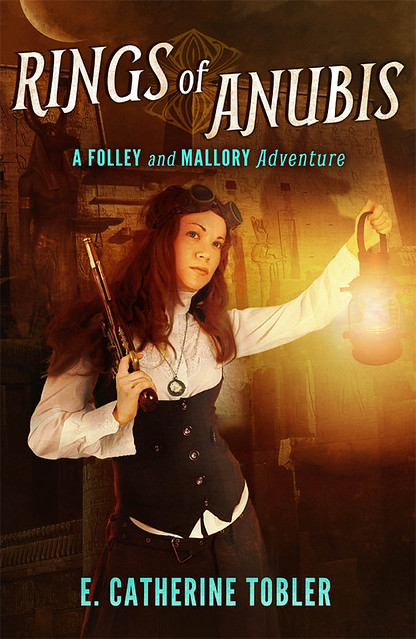 History isn’t history to the people who are living it — it’s their present, their world and their lives. This is a thought E. Catherine Tobler kept in mind when writing her novel, Rings of Anubis. Here she is to explain what it means for you, the reader.

My interest in all things historical started in elementary school when I discovered a National Geographic book called Secrets From the Past. The book explored tombs of the world, lost cities, and discussed how we could determine what people of the past were like by exploring the things that remained. It wasn’t until high school I heard about the marble Thomas Bruce, the 7th Earl of Elgin, removed from the Parthenon in Greece. Many viewed Elgin as no better than a vandal and a thief–even Lord Byron took a position on the matter, the debate concerning the marbles long and fierce. The British Parliament purchased the marbles in 1816 and to this day, they remain in the British Museum.

I wondered, how could people do that? Had archaeologists carried such historical things away, knowingly or not? Surely they had. I knew I couldn’t write about Egypt of 1889 without keeping such events in mind. Within the time frame of Rings of Anubis, Egypt was occupied by the British and many treasures were accidentally and carelessly lost in the haste to discover what lay beneath the dirt. I wanted my heroine, Eleanor Folley, constantly mindful she was exploring a world inhabited by people who had been as real as she was. To make it as personal as possible for her, I placed her in both worlds: an Egyptian-Irish archaeologist, trained by her parents, both archaeologists before her.

Eleanor Folley wasn’t in the business of archaeology for the wealth or fame that came with it; while those who didn’t know her might consider her no better than a vandal and a tomb raider, she never profited from her discoveries. Eleanor Folley was always in search of something else–something more personal than gold or fame.

What would be like to face each tomb with the possibility of something personal beneath the stones? What it would be like to excavate a site and hold your breath as dirt parted to reveal bones that might belong to someone you loved? I wondered how a person might continue such a search in the face of never finding what they sought, how they might struggle if even their own family asked them to stop searching. How do you stop looking for part of yourself and what might you do if you encountered someone else on a similar quest?

The history buried beneath our modern lives isn’t only history. Living, breathing people called the fragmented walls we unearth home before we called them relics. The bones we carefully brush clean are someone who had a name, an occupation; someone who was loved or despised. Mummies aren’t just linen-wrapped bones–they were people who created and dreamed and dared just as we do. What we take from the dirt isn’t simply random debris to be swept away in the quest for wealth and recognition. I wanted to explore the idea that someone buried within the Egyptian desert could be greatly loved by someone still living, someone who, in the end, had no idea what she was about to unearth.

← Tour Travel, Whatever and Comments
The Lock In Tour FAQ →