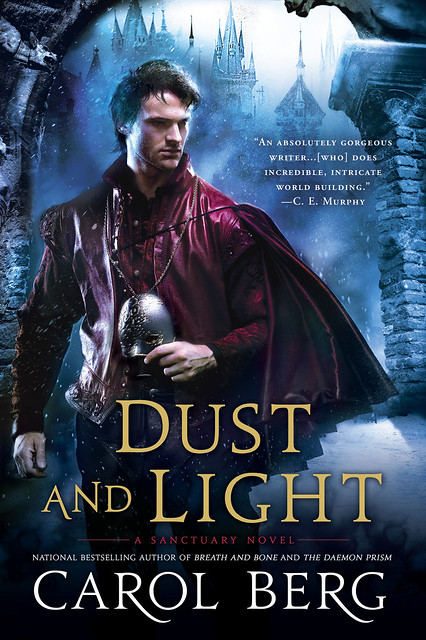 For her novel Dust and Light, author Carol Berg takes a look at some of the more mundane aspects of magic — that’s “mundane” as in “practical,” not as in “boring” — and shows how a story can build from the rules and traditions a writer places on its use.

Going in search of the big idea that drove my new book, Dust and Light, into being got me running in circles. Every novel results from layers of ideas, and this one did so in spades. Here’s how it went:

For years I was convinced that the only way I could develop a novel was to begin with an impression of a character in a difficult situation and grow the story and its events and themes from there. As happens with many certainties, that conviction was eventually splintered. It happened on the day I heard a National Public Radio feature story called The Last Lighthouse. It wasn’t the meat of the essay that got my juices flowing, but the title.

A lighthouse is usually a warning. But it could also be seen as a guide to safe harbor. Or perhaps a house of enlightenment. Whichever kind my lighthouse was, why might it be the last? (You see? Already it was my lighthouse.)  That title also led me to recall a Rosemary Sutcliffe novel about a young Roman soldier in Britain, and the vivid scene where he is standing in the lighthouse at Dover watching the last Roman ship leave without him. And I wondered if anyone at that time in history had possessed the breadth of vision to foresee what Rome’s contraction would mean for Western Europe. And as all fantasy writers do at some point, I asked myself, “Well, what if someone did?”

As if it were a gift, here lay the foundation of the deliciously complex world of my Lighthouse Duet: Flesh and Spirit and Breath and Bone, and its central conceit. As Flesh and Spirit begins, the once prosperous kingdom of Navronne is facing a dark age caused by a disastrous decline in the weather and a raging civil war of succession. Roving bands of fanatics burn and murder, believing that leveling civilization will placate their particular gods. Amid this chaos emerges a group called the Lighthouse Cabal.

That concept simmered for a while, mingling with another that had been nagging at me. As I observed politics and popular culture through the years, I’d noticed how often the children of talented parents followed in one of their parent’s chosen profession/art/sport/industry. Think the Barrymores or the Bridges, the Mozarts or the Strausses, the Carters or the Kennedys, the Unsers or the Pettys, the Johnny Cashes, or Ravi Shankar and Nora Jones. And writer brain whispered, “What if that profession were a person’s only option?”

From this little question arose Navronne’s magical history. Magic is confined to a group of wealthy families, descendants of long-ago invaders. Those born into these families inherit either their father’s bloodline magic or their mother’s. They spend their lives in study and practice until their Head of Family deems them of age and ready for their first contract, for sorcerers have become a commodity made available via contract to the highest bidder – whether that be a city, a noble, a clergyman, a market fair, or even, in a stroke of strange circumstance, a city coroner.

So what are the implications of contractual magic? Marketing hasn’t changed over centuries. First, keep your product valuable; even better, build a mystique about it. Second, maximize customers, ie. keep it independent, available to all varieties of the political spectrum. And lastly, make sure you have a monopoly.

These pureblood families have created a mannered, disciplined subculture. They keep themselves detached from ordinary society and politics, wearing half masks and expensive dress to reinforce their unique position in society. Mystique!  They have forged a partnership with the crown that preserves their autonomy. And the contracts that bind them and their grown sons and daughters to clients are very strict – and very lucrative. In exchange for their wealth and comfortable life, their personal choices are strictly limited. From what to wear to whom to marry. From how they address each other to how and when they may express emotions. And most definitely the particular variant of their bloodline magic they practice and for whom.

All well and good. I had lots of ideas and lots of potential. But I wanted to start writing. Where was the story?

I love epic stories that deal with politics and religion, with events that challenge the boundaries of magic, science, and the divine, and mysteries of all kinds. But I also like to view these big stories through a very personal lens that can draw me – and my readers, I hope – right into the story. That’s why the start-with-the-character method had worked well for me. This time I had to search for a protagonist to go adventuring in this crumbling world – to unravel the meaning of the lighthouse and live with the ramifications of this kind of magic.

Fortunately, I found one I loved for the Lighthouse books, a cheerful, pleasure-loving renegade pureblood sorcerer, who despised the rigid life laid out for him so ferociously that he ran away from it. And rebellion is a high crime when magic is a commodity that enriches one’s little corner of the world so profoundly. Valen was so determined to escape what he called “slavery with golden chains” that he chose to abjure all use of magic (except one nasty little addictive enchantment). He was willing to take whatever low-life job he could get, eat whatever he could scrape together, and avoid entanglements that might reveal his past and get him sent back home. Freedom was enough. Choosing his own path was enough, even if that path was, by necessity, dangerous, rocky, and lonely.

I liked where Valen’s story took me – into mystery, adventure, and the mythology of Navronne. But to my chagrin, focusing on a renegade meant there were many aspects of the pureblood culture I never got to explore. Valen’s opinions were colored by the fact that he came from a particularly despicable family, yet I knew there were many worthy aspects of pureblood culture. The purebloods’ neutrality meant that anyone could have access to magic if they had the means to acquire a pureblood contract. If magical families were wealthy, then necessity could not force them into serving masters they deemed criminal or cruel. They had time for study and practice of their extraordinary gifts and discovery of new aspects of talent. Strict marriage laws ensured that magical bloodlines did not die out.

So, I decided that I wanted to go back to Navronne and do some more poking around, but not as a sequel to Valen’s story or a prequel. I wanted to create a parallel story, sort of like viewing the American Revolution from the British side after viewing it from the American side. Thus, for the second time, I started looking for a protagonist, maybe one who believed in the purebloods’ way and saw the benefits of their rules. Someone who valued the magic. I wanted to see the world of purebloods and ordinaries through the eyes of a person who was not a rebel. Rebels shake things up in a flawed world, but ultimately, someone has to have the discipline to know how to put matters right. And there, standing in a crowded street waiting for me, was Lucian de Remeni-Masson, an artist whose magic can imbue portraits with truth.

Lucian has grown up in a large loving family, believing in his bones that his gift for magic comes from the gods, and that it is his duty to learn of it and use it in service to the world. Magic is a glory that fills his life, and he believes that restricted choices are the rightful price for a future that is unique and marvelous. Though he slipped up once as a youth, he has become a model of self-discipline.

Yet, there is an inevitability built into human experience, especially for those brought up in safe, secure, environments where beliefs are so certain. Fate, the gods, perverse nature, or maybe just an ornery fantasy writer throws nasty things at us, forcing us out of the womb of childhood and into a harsher world where rules are not simple, certainties can be shaken, and choices are not clear. A matter of import can be simple justice for a murdered child or the fate of a kingdom. And what happens next comes down to a particular person and how his beliefs, experience, and personality shape his choices of how to deal with those nasty things. What remains of him when the foundations of belief are ground into dust? Yep, the choices will tell. The story still grows from the character after all. And Lucian’s story became Dust and Light.

Read an excerpt. Visit the author’s blog. Find her on Facebook.