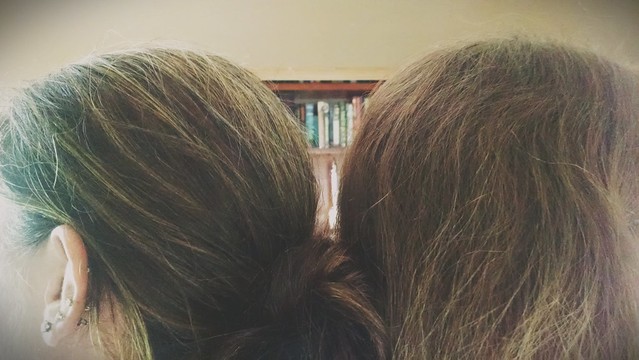 Athena is ever-so-slightly taller than her mother now. It’s a pretty big (or at least tall) moment here at the Scalzi Compound.

I was supposed to be writing in the novel this morning, but in the aftermath of Doug Lathrop passing away I found myself wandering through some of the archives of the alt.society.generation-x newsgroup and getting a little depressed and nostalgiac in a way that I don’t frequently get. I’m not a notably nostalgic person, in part because I don’t feel the best part of my life is in the past, but it definitely hit me this morning, and I had to spend a little bit of time figuring out why.

The closest I can come to it is that asg-x is the one thing in my past that is really in the past. My high school and college, for example, are still there and still have people running through them — they are living entities, and even though my time in them gets increasingly further away in the rearview mirror, I know each new group of people who have the experience of going there has some consanguinity of experience with me. Not exactly my experience, but we’re still connected by the same common thread.

asg-x, on the other hand, is tied into a very specific time — from 1993, when it was created, to about 1999 — during which the USENET was still a common place for people exploring the Internet to find and read and use. USENET’s moment is over; there are people who still use it, but they’re the people who’ve been using it. It’s hard to find now and it’s not bringing in new people. And asg-x, the newsgroup, is definitively dead — there’s nothing new there now but spam posts, either containing dance music lists or political rants.

There’s a finite group of people who experienced what asg-x was, when asg-x was something at all. There’s a finite group of people for whom asg-x was a community, and for whom it was their community, with all the little tics and quirks, positive and negative, that a community has. We’re all that there will ever be, basically. Doug’s passing is a reminder that this small and finite community is in the process of shrinking, inexorably, through the simple passage of time. There’s going to be a point, hopefully several decades from now, when the last person who ever attended a “tingle” will pass from the planet, and then that will be it. The end of the asg-x community.

To be clear, it’s a small thing, and a community that was significant mainly for the people who were in it. But even so, within that community, friendships were made, people fell in love (and some of them even got married and had children), laughs were had, arguments were posited, gatherings planned, memories created and milestones celebrated. It was real and it happened, and now its moment is gone and to a very real extent nothing will ever be quite like it again. There’s no way of getting back there. There’s no there there anymore.

And that’s fine. Some things are finite — well, in the long-term sense of things everything is finite, it’s just some things are finite faster — and asg-x is one of those things. I’m not going to wish it were suddenly 1996 all over again and everyone was back on USENET, with a flood of new newsgroups of their own (although I can just imagine what alt.society.THANKS.OBAMA would look like). I’m all right with asg-x having its time, and that time being over.

But now I understand why people are nostalgic. It’s your brain trying to express a moment, and recognizing that the only people who would ever truly get what you’re trying to express were the ones who were there, and they already know.