1. Next Tuesday, which is the release date of Lock In and also the start of my book tour (I’ll be in Houston that night), I’ll also be doing a Twitter chat with the folks at Apple’s iBook store. You’ll be able to ask questions (indeed, we’ll even be taking some questions in advance) about the book, the tour, life, the universe and everything. I’ll be offering up more details soon, but for now: 4pm Eastern, August 26, you should be near a Twitter client.

2. Over at Tor.com I am doing a two-part Quiz at the End of the Universe, and the first part is up now. There you will discover what I would take to a desert island, if I have a favorite unknown writer, what historical moment I would go back in time to change, and so on. Also, they spotlight William Beckett’s awesome new song for Lock In, so you’ll have that going for you as well. 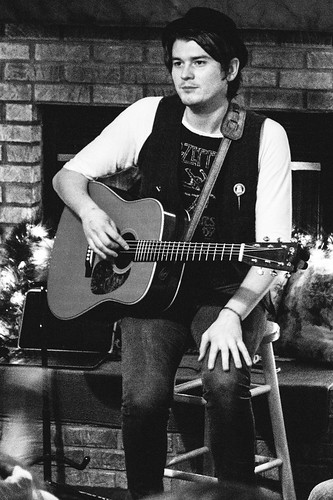 It’s been my thing over the last few novel releases to commission a song from musicians I admire to accompany the book release. For Lock In, I asked William Beckett if he’d be willing to do the honors, and I was absolutely delighted when he said yes — I’ve been a huge fan of William’s, both for his recent solo work and as the front man for the band The Academy Is.

I was even more delighted when William sent me the first rough mix of the song. I had sent him an ARCs of Lock In and its prequel novella “Unlocked,” so he could immerse himself in the world where a disease called “Haden’s Syndrome” had locked millions of people into their own bodies — alive and awake but immobile — and to discover how we and our culture had changed because of it.

William ran with the idea and turned in a song that could very easily be an anthem from and for those who have Haden’s — a shout out of the darkness, as it were, demanding to be heard. It’s a tremendous song on its own merits, but as a calling card for the novel, it’s simply perfect. I am fantasically honored William created this song for me, and equally honored to share it with you now. I hope you like it and share it around to everyone you know.

And now, for those who are coming into this entry with no prior knowledge or context: Links!

* The song “Lock In” is the theme song to the novel Lock In, by John Scalzi, which will be released on August 26, 2014. You can read the first five chapters of the novel as well as “Unlocked,” a prequel novella to the novel, over at Tor.com. You can also preorder the novel at your favorite local bookstore or online retailer (please do!). IT will also be available in audio through Audible.com. You can also see John Scalzi on his upcoming book tour.

* “Lock In,” the song, is also soon to be available to purchase on all your favorite online retailers. If you like the song, please buy it! William Beckett is a recording artist at Equal Vision Records. His most recent album, which I enthusiastically recommend, is Genuine and Counterfeit. William is currently out on tour, so go see him.