A mini rant on politics and assholes that I just put up on Twitter:

A quick multi tweet bit is coming. You have ten seconds or so to prepare.

Those who've seen me punt assholes here who happen to be conservative may be shocked to know there are conservatives I like/love/admire.

In fact, there are many conservatives I like/love/admire, including much of my family and community, and many friends.

I am not one of those people who believes that opposing someone politics means you can't like/love/admire them in other ways and areas.

The reason you see me punting a lot of assholes who are conservative on Twitter is because they're assholes first, conservatives second.

And it's true that some people who are assholes use their conservatism as a rationalization/justification for being terrible people.

But the fact is, they're just assholes. They'd be assholes if they were centrist, liberal or arnarchists. Some people just suck.

(And indeed there are asshole liberals, centrists, anarchists, etc. I don't like them, either.)

If you're a conservative, be aware I don't hate you for your politics, even though we have many points of contention, politically.

Likewise, I assume you won't hate me, even thought you think I'm completely wrong on many things regarding politics.

And if you're an asshole who hides behind conservatism to cover your basic lack of humanity, I will like you even less.

Conservatism, although I disagree with much of it, deserves better than to be ill-used by you.

(Conservatives, feel free to sub in "Liberals" there for your own taste, etc.)

Bottom line: If you're a conservative, don't assume I dislike you. I probably don't. Your character as a human will show no matter what…

..and that's the thing I'm going to respond to, first and foremost. Even when you tell I'm completely wrong about politics.

And now, as is custom after a Twitter rant, a pet picture as a palate cleanser. pic.twitter.com/9ixG3fY7Om

I’ve discovering, particularly in this last year, that the center of gravity of my online presence has shifted away from Whatever entirely and has moved more than a bit toward Twitter. The graph above offers some evidence of that — in the last 28 days, the things I’ve said or retweeted on Twitter have gotten eight million “impressions” (the term meaning “the number of times users saw a tweet on Twitter”). Meanwhile Whatever is on track to get something like six million views for this entire year — down from 2012, the peak year for the site with 8.1 million views recorded by the WordPress stats package (as always, see this caveat about stats here). Likewise, the number of followers I have on Twitter (currently 68k) is higher than the number of unique daily visitors the site gets (the high point number for August: 23.4k).

Breaking down what the stats mean after this point gets complicated — starting with the question of whether a 140-character-or-less tweet can be meaningfully compared with a 500-word-or-more blog post — but no matter how you slice it, it seems pretty clear to me my biggest online audience at this point is on Twitter, not here at the Whatever home base.

How did this happen? I have hypotheses, which include:

1. The relative decline of the blogosphere in a general sense, as blog writing and reading are transplanted for most people by easier-to-use social media like Twitter and Facebook;

2. The UI dynamic of newer social media, which makes it easy to Like/Retweet/Share what people write on them, making for an easier spread of posts;

3. My tendency to put short, funny bits (i.e., sharable) on Twitter that in earlier years might have gone to Whatever, leaving Whatever as the repository for longer, more thinky (i.e., less immediately shareable) bits;

4. My increased travel and work schedule leaving me relatively less time for thinky/funny Whatever posts, but apparently the right amount of time for snarky bits on Twitter;

5. My relative lack of political posts this year, which are traditionally drivers of traffic (why fewer political posts? Because my general feeling this election year has been fuck all these assholes, which doesn’t make for great writing);

6. The various ways of sharing material on Whatever has increased, not all of which show up on the WordPress stats — for example, RSS reader views, which show up in some places in the stats package but not others, and which can be a significant part of readership (40% of the recent “Get Out Your Bingo Card” entry’s readership, for example), but not reflected in the site stats — because, after all, it wasn’t read on the site;

7. I can write a couple dozen tweets a day (or more if I’m exercised) whereas I rarely most more than three entries a day here, so there’s more opportunity to run up numbers on Twitter as opposed to here.

There are other likely hypotheses as well, but this is enough for the conversation at the moment.

For those of you who might be worried that this means I’m about to announce that I’m abandoning Whatever for a full-time residency on Twitter, relax: it’s not gonna happen. One, not everything I want to write online can be encapsulated in 140 characters. Two, I’m a proponent of owning one’s own space online, so when Twitter/Facebook/Google+/Etc inevitably go the way of Friendster and Myspace, I will still have a place to be online, doing my thing. Three, because six million visits here each year isn’t a thing to sneeze at, either. Whatever’s not going anywhere, and neither am I.

But it does mean I’m aware that my online presence is spread out more than it used to be. It also means that I think about the ways the two platforms work for and with each other. I will use Twitter to link back to things I’ve written here, for example; conversely, if I have a particularly interesting set of tweets, I’ll post them here for posterity. I think about how they can complement each other, so that both are useful (and fun!) for me, and for the people who follow me on either, or both.

Speaking of which, now I’m off to Twitter to tell people I’ve posted about this topic here. See? That’s how it works, people. 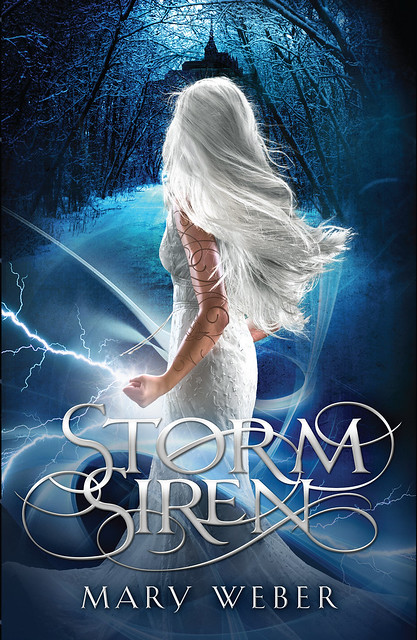 Authors go into their books with what they intend to put on the page. But there are also the things that they put in there that take them by surprise — and sometimes those things add a new level to the work. Mary Weber talks about one of these things in Storm Siren — and how it got into the book in the first place.

My big idea didn’t start out as big. In fact, I didn’t realize it was even an “idea” until a friend gave me feedback that went something like: “I love your focus on diversity. It’s cool you incorporated other races and special-needs characters into the book. What made you decide to do that?”

“Huh?” I frowned. She clearly didn’t understand. The big idea was supposed to be female empowerment. You know – slave girl with superpowers discovers her worth isn’t in her status or abilities but in who she is? Yeah, that.

Later, as my shaky hands slipped the story into a few more inboxes, the replies came back with more of the same: “Good job on how diverse it is. How’d you come up with that?”

Um… I didn’t. But I should have. I should have considered the importance of diversity in story. Been intentional. Yeah, that.

Now, in my defense, I did purposefully make my main character’s love interest a hot black man instead of a hot white guy. Because HELLO. He’s hot. But did I add the various individuals and special needs into Storm Siren to make a statement? No. Part of me wishes I had, because that sounds so intentionally awesome. But the truth is much simpler. Perhaps humbler.

I live in the real world.

I work with special needs individuals and their families. Some of my own family members have special needs. And those people and families are the most incredible, passionate, and hardworking that I know.

I also live in a California coastal community that’s a virtual mixing pot of cultures and ethnicities and beautiful beliefs. Rarely have I encountered any shade of skin copping an attitude toward another person’s shade of skin. We simply are who we are. People. Trying to get by as a community of college-agers, professors, lawyers, waste-removal truck drivers, plumbers, dentists, artists, photographers, middle-agers, parents, homeless, wealthy, elderly.

So, I’m not sure it’s really a big idea when those faces weave their way into a fictional story and are “represented” in romance or fairytale, or westerns, or, in my case, fantasy. It’s simply that they are in my community, and therefore, the people who influence my life story. I bet they’re the same type of people who influence yours as well – people who empower us.

In looking at it that way, maybe my earlier big idea wasn’t too far off. Because at the core of female empowerment – heck, at the core of human empowerment – is value. No matter what things make us different or the same, we are each valuable because of the very fact that we exist.

And we add value to each other by the fact that we choose to live life together, sharing with each other, caring for each other. We add value by standing up for the rights of anyone who has to fight harder to have her voice heard.

And if you ask me, that right there is what makes us powerful.