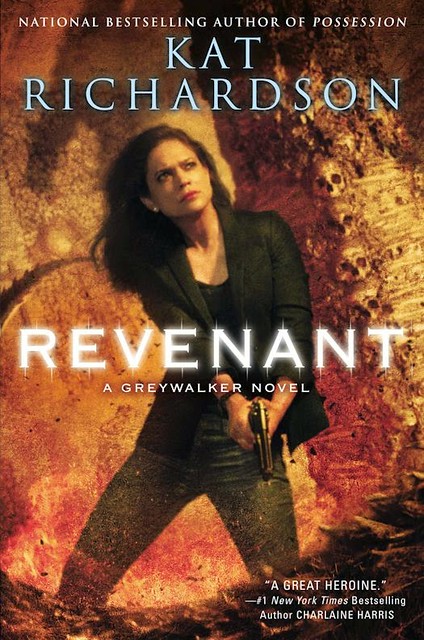 This is the end! Or at least, for Kat Richardson, her new novel Revenant represents the end of a certain part of her writing career. What is it, and how did she know it was time to turn off the light? She’s here to tell you.

Endings. Ah, now, that’s the tricky bit. You build to an ending—the proper ending—that reflects and is indelibly linked to the beginning. And in the course of a long series all the little endings lead, through inevitable change, to the great, big, lollapalooza in the final book—plus some explosions, some gore, sex, death, and general mayhem, of course. And that was were the Big Idea for Revenant came in—because it’s not just a book; it’s The Last Book.

As a writer, you design the whole story for the ending. It doesn’t “just happen.” It’s engineered. Anyone who says otherwise is lying, cheating, or lucky. “I don’t know how it ends,” is not a luxury in which writers can long indulge. Oh, you can get away with it a bit at first, when you’re doing something new and exciting and your instinct is dragging you through the brush and wildfire like rider tied to a mad horse. But eventually—especially with a long-running series—you have to have a destination you mean to reach and go there. It’s not just a road trip through the writer’s imagination—it’s a journey to a specific point in that landscape. No matter how awful, or difficult, or heartbreakingly beautiful, that’s where you’ll take your readers, because you have to and in setting up your series, you promised them that you would.

And so I came to the end that is the beginning, because the word revenant means “that which returns.” The book Revenant came out August 5th and it’s the last novel in the Greywalker series—at least it’s the last for now. Not because the publisher didn’t want more—they did. Not because the sales sucked—they were all right, if not exactly stellar. Not because I was bored or had no ideas left. It’s the end because I’m done. I finished what I started and I took the characters where I wanted to take them.

Essentially the Greywalker saga (as some folks took to calling it) is one long, nine-part novel and, like any story, it has an end that was engineered and intended. That’s where the Big Idea lies—in what I intended and what I hope I accomplished—not in the details of the very last confrontation of the very last book. What I meant to do was to bring the last book back to the beginning and illuminate the main character’s change over the course of the longer arc. Well, and tell a creepy adventure story as well, of course.

When I started, the protagonist, Harper Blaine, was a chilly, stubborn, inflexible loner. She was smart and driven, but she had issues, few friends, and her charm was reserved for getting people to answer her questions. She had what she thought she wanted in life: control. But then someone bashed in her head and that control was taken away from her. Everything she thought she had and was—everything she’d built for herself, by herself—was upended. Over the course of the series, she’s had to figure out a lot—who she is, what’s important enough to fight for, what she’s willing to do, and what she wants to become in spite of what others try to force her into. She’s had to endure a lot: death, disillusion, despair, the loss of friends and lovers, and revelations she didn’t want to have. She’s also had to learn to be a whole person who understands friendship and love and pain rather than avoiding them. Within the larger arc there are three smaller arcs about reclaiming herself, learning to trust others, and finally, forging family links and friendships of her own.

There were also, y’know, ghosts and witches and monsters and mages, kidnapped children, dead wives, devastating earthquakes, world-threatening plots, and a particular vampire who’d been lurking about since the beginning and needed a little fixing, too. Plus a lot of loose ends, lost friends, and family problems that needed to be tied off or cleaned up, not to mention the matter of undead spies that may have started everything….

So I packed the whole kit and caboodle off to Lisbon so I could talk about family and friends and life and death, contrasting one character’s past with another’s, burning them all down and then forcing them all to build something worthwhile out of the wreckage. If I did it right—and I think I did—you should be able to see the beginning of the story reflected in the end and a protagonist who has come back to exactly the right place at last. In the end, we are at the beginning.

← Posting For Posterity
Two Truths and a Lie With John Scalzi →