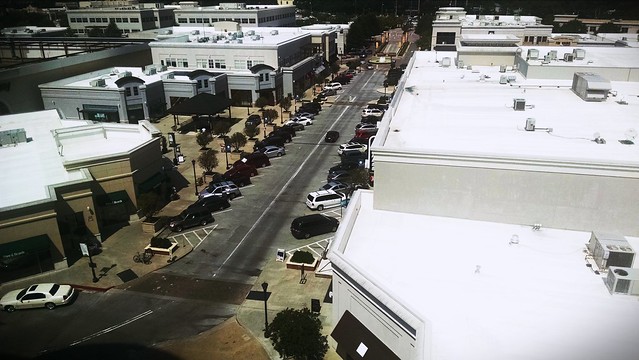 Overlooking a mall. There are worse views.

Event tonight at 7:30 at Quail Ridge Books, here in Raleigh; if you’re in the Raleigh area I hope to see you there. If you can’t make it, tomorrow I am in Chapel Hill, just down the road, at Flyleaf Books. Come to either. Or both! 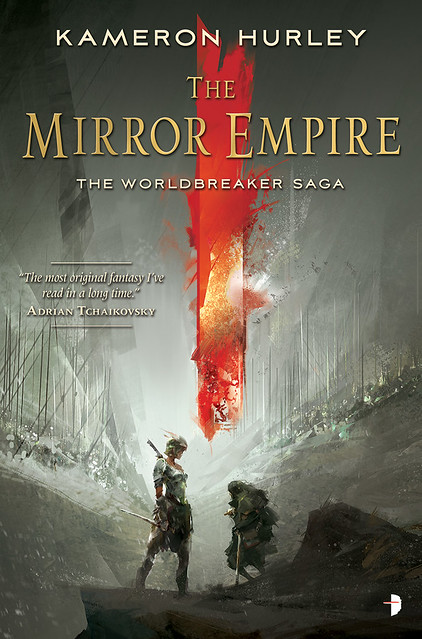 Fresh off winning dual Hugos at this year’s Worldcon, Kameron Hurley is releasing The Mirror Empire, which is quickly garnering some of the best reviews for a fantasy novel this year, in part thanks to its startling and vibrantly original worldbuilding. But as Hurley explains, some of the most intriguing worldbuilding she’s doing here involves who she imagines at the books antagonists — and why it matters that she’s approaching them as she does.

The Other is always monstrous. Inhuman.

That makes it easier to kill.

Epic fantasy is often understood as a genre that pits good vs. evil, light vs. dark. Tolkien’s work became the modern template for this, inspiring numerous imitators that pitted the good merry few against the faceless hordes. Grayer-toned fantasy became more popular in the late 90’s with authors like Robin Hobb and George R.R. Martin removing the faceless horde (aside from those white walkers, perhaps…) and giving us a fantasy where all the good and evil of the world was contained in people, not faceless creatures. We saw all the light and dark, the grim and hopeful, in our own faces.

My academic background is in the history of resistance movements, in particular in Southern Africa. I know all about the horrific things we’ll do to one another – things we couldn’t even imagine some faceless evil doing.  But it was when I expanded the reach of my work into the study of genocide and mass violence – what makes ordinary people kill? – that I realized what my first epic fantasy series was going to be about, at its heart.

Because though we may seek to Other groups of humans to make it easier for us to kill them, the reality is that those who kill, and those being killed, are just the same.

We are all the same.

Oh, certainly, let’s not get too heavy, here. The Mirror Empire has blood mages and flesh eating plants and energy swords that sprout out of people’s wrists, satellite magic and semi-sentient trees, and all that cool, fun stuff we visit fantasy to experience. But the core of it, the big idea behind it, happened a few months after I returned from completing my academic work in South Africa.

Back then, I was thinking big – I was plotting my series arc without actually knowing who the Big Bad was. I knew I had a group of pacifist people fleeing from a force that wanted to destroy them, but I had no idea why this Faceless Horde wanted them dead.

While working out one morning, I had a vision of one of the protagonists traveling across the world, fleeing from these invaders who were wiping out his people, and he goes to a neutral country to sit down and work out a truce. He opens the door to the meeting room…

I remember the room. A stone room. A table. A bank of windows spilling white light, a cityscape with blue tiled roofs. He opens the door, and who does he see?

He sees his dead sister sitting at the table. He sees her rise. Smile. Hold out her hand. Perfectly healthy. Perfectly alive.

I realized who the Bad Guys were, in that moment.

My pacifist people were fighting themselves.

The questions this image provoked were many: how was she alive?  How had her own brother not known she was leading this army? And, most importantly: why was she killing her own people?

I could have made up something lazy, of course – she hadn’t really died, it was all a trick, a dream. But a far more interesting possibility presented itself in that moment: two worlds. Reflections of each other. Mirror images. One world is dying. The other sits on top of it, just a slide through the veil between them. But to escape a dying world means murdering all of those who share their faces on the other side.

Killing your doppelgänger. Murdering a world, to save yourself.

The catalyst for this event, I decided, would lie in the heavens. It would be a recurring catastrophe triggered every 2,000 years by the arrival of an erratic satellite in the sky which bestows strange powers on the inhabitants. This heavenly body, unlike the others orbiting the world more regularly, gave specific individuals a very limited power: the ability to open doors between worlds.

Who those newly powerful people turn out to be, who they side with, and who controls them, make up much of the narrative push of the book.

But at its heart, The Mirror Empire is about the Big Idea. It’s just this:

These are questions every single character must answer, in the end.

They’re questions many are faced with every day.

It’s not a good vs. evil question. A light vs. dark question. It’s a human question.