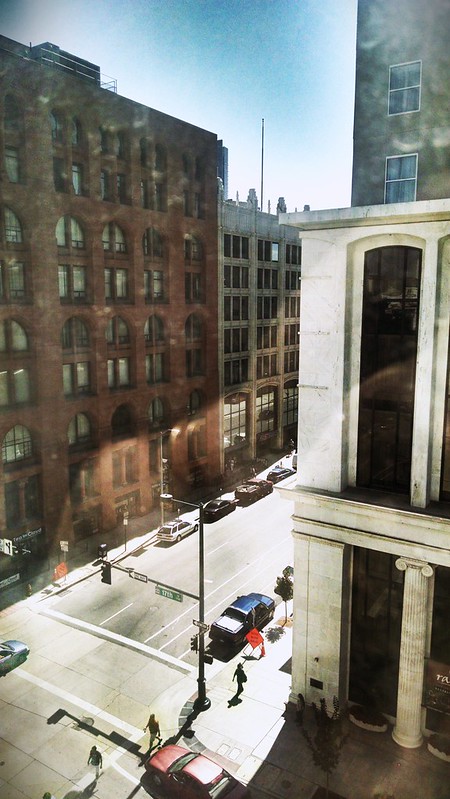 I’m back on the road, and here’s what the road looks like today. Not too bad. The hotel room I’m in tonight has a jacuzzi. I feel like I should listen to some smooth jazz or something.

In any event: Denver! Come see me tonight! 7pm at the Tattered Cover Bookstore on Colfax. Here are all the details. Come and (you know this part by now) bring everyone you know. The more the merrier.

Tomorrow: Seattle, at University Bookstore, also at 7pm. Also will be a blast. 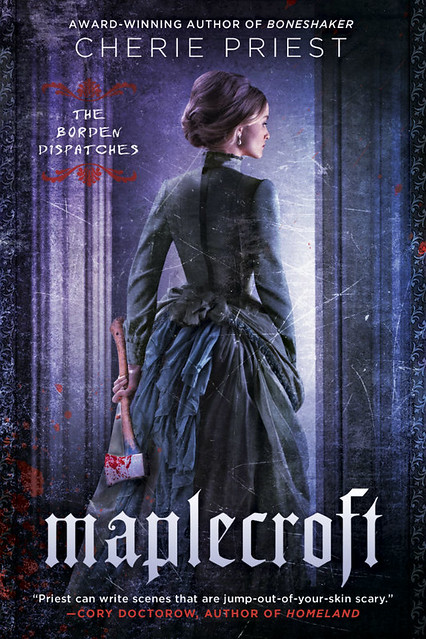 You’ve heard the nursery rhyme, but do you know the real story behind Lizze Borden? Does anybody? This is the jumping off point for Cherie Priest and her novel Maplecroft, which follows the infamous Borden after the real-life events that made her notorious. Do you dare follow?

Like countless others in the last hundred years, I first heard the name “Lizzie Borden” via the jump-rope rhyme. Everyone knows it: Lizzie Borden took an axe, and gave her father forty whacks… And so forth. Whether or not she ever killed anyone is still up for grabs; she was acquitted of all charges in 1893, but that’s never stopped anyone from speculating about her parents’ murders – and once you’re canonized on the school playground, your legacy is pretty much set.

So what really happened? God only knows. Either she got away with murder, or she was falsely accused and thrown to the bloodthirsty public by an opportunistic media. Like they still say in journalism, “If it bleeds, it leads.”

There was a lot of blood in the Borden house. But that’s not The Big Idea.
The Borden murders were far more interesting, complex, and peculiar than is commonly remembered. Left out of the nursery rhyme are allegations of poisoning, an illegitimate son in search of an inheritance, and a crime scene treated like a theme park before the bodies were even cold.

And more, of course. Much, much more.

After Lizzie’s trial, she and her older sister inherited the family fortune; but rather than leave the state and start fresh someplace else, they bought a big house on the other side of town. Its name was Maplecroft, and there, they quietly lived out their days.

Except that maybe, they didn’t.

A quick google turns up a number of academic texts on the Borden case, as well as a handful of “true crime”-style popular retellings, but my novel Maplecroft isn’t about the murders. It’s about everything that happened afterward. Sort of.

The truth is, Lizzie never spoke to the press – and very little is concretely known about her life, either before or after the events that made her a household name. Oh, but there was plenty of gossip. Why, you should hear about the shenanigans that went down at Maplecroft: witchcraft! wild parties! lesbianism!

To quote the bard, two out of three ain’t bad.

The grand old house definitely saw its share of wild parties, largely at the behest of a young actress named Nance O’Neil. (Her real name was “Gertrude Lamson,” but you can hardly blame her for picking something else.) And there’s a fair measure of circumstantial evidence to suggest that she and Lizzie had a romantic relationship. There’s also plenty to imply that Lizzie’s sister Emma didn’t like it one bit, and they had a big falling out over it…but what can you do?

In short, the more I learned about Lizzie, the more I felt genuinely sorry for her. If she did kill her father and (step)mother, you have to wonder what drove her to it; and if she was innocent, she surely didn’t deserve the ensuing fallout from the media – or from the court of public opinion. So, having become quite comfortable tweaking history for my own nefarious purposes…I thought I’d make her guilty, but give her a damn good motive.

And that was The Big Idea.

I’d been itching to write a gothic horror piece for a while now, and Lizzie Borden collided with that itch, scratched the hell out of it, and gave me a framework for the story I wanted to tell.

Almost every book these days comes with a disclaimer, something like: “This is a work of fiction, and all historical places or people are used fictitiously…” Well, we should probably stick that on the front of this one, rather than inside the cover – because at its core, Maplecroft is about Lizzie Borden fighting Cthulhu with an axe. Or, if you prefer: It’s a 19th century epistolary love letter to Dracula, by way of Lovecraft.

This is the story of the aftermath – the aftermath of Lizzie’s trial, yes; but it’s also about the aftermath of a supernatural tragedy, and a gentle professor’s terrible transformation. This is about what happens when you pray to something terrible, and it hears you. It comes looking for you. And it finds you.

So after a fashion, Maplecroft is both an epilogue and a warning. It’s fiction, and any real persons are used fictitiously, of course.

But there’s truth to be found in the real life strangeness, all the same.