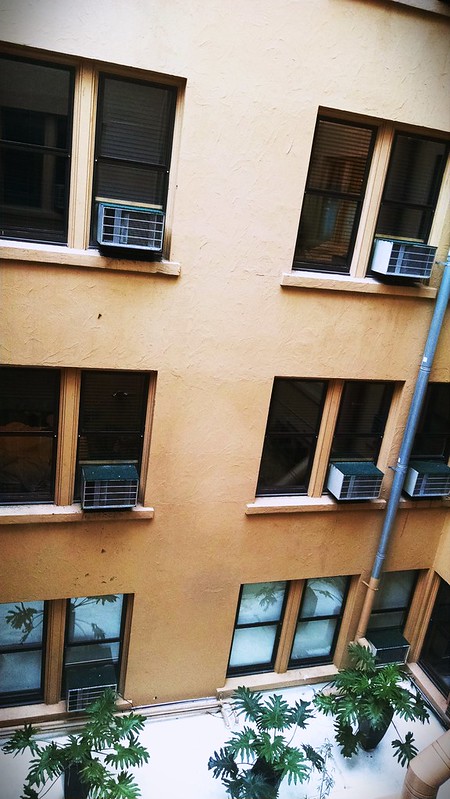 The view out my hotel window is not hugely inspiring today, unless I want to do a San Francisco version of Rear Window, but on the other hand I get to stay in this hotel room for three whole days. Which is three whole days on not having to wake up early to catch a plane. Which is awesome. I slept ten hours last night. Which is also heaven. San Francisco is heaven, is what I’m saying, even with this window view.

For those wondering why I didn’t post this picture yesterday, it’s because I was so busy I didn’t actually get into my hotel room until 11pm. My check in earlier in the day was literally dropping off my bag and then hopping back into a car two minutes later to get down to Google, where I had an event. Then a few very nice hours hanging out in Mountain View with my friend Diana, and then the event at Books, Inc, which was lovely could be.

Event tonight: Petaluma, at Copperfield’s, at 7pm. It will be a ton of fun, so if you live north of San Francisco, please come, and bring every single human you know. Tomorrow, I will be at Borderlands Books in San Francisco, one of my favorite bookstores on the planet, for an afternoon event: 3pm.

Other Stuff: One, editorial cartoonist Ted Rall, whom I have known for years and consider a friend, gives me a cameo in his cartoon today. And yes, this is why I do carry at least a little cash on me (for what little good it would do me in the scenario Ted posits). And I do like that he drew me with a little more hair.

Two, this little tidbit, which I will use a tweet to convey:

A friend with Bookscan access says Lock In is the #1 front list science fiction book this week. TIME FOR QUEEN. http://t.co/OqmZagM2Ri

(For those of you wondering about terms here, “front list” means newly released books. Books that have been out for a while are “back list.” So Lock In is the best selling new science fiction book out there this week. Back list best seller is almost certainly Ender’s Game.)

Three: For those wondering, the tour is going fantastically well, although I am slightly discombobulated. I am on tour time, not real time, which means I have frankly no idea what day it is any more, as I am outside the rythym of the days. I had to confirm with my wife this morning that today was actually, in fact, Friday. It’s a pleasant discombobulation, but it’s also a bit weird. I mean, I’m a writer — it doesn’t usually matter to me which day it is anyway. But now it’s even more so.

Finally: I’m opening the comment thread here for a couple of days to let folks talk about whatever they want. Because why not? Chatting amongst ourselves is fun. So: How are you? Are you on tour time too? Tell me. TELL ME.