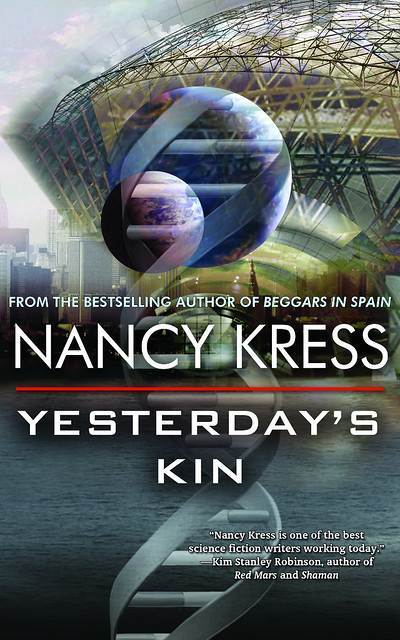 Hugo and Nebula Award winner Nancy Kress is thinking big about something small: Your genes. In the real world, they connect you, for better or worse, with every other human on the planet. In Kress’ latest, Yesterday’s Kin, they also connect with something else — something surprising.

Can you define humanity by its genes? Maybe not all of human behavior or growth or soul, but since 1981, you can define humanity’s past that way, in order to decide who is related to whom and how.

Somewhere in Earth’s deep past (very, very deep, possibly 1.5 billion years ago), an ancient bacteria merged with an ancient single-celled organism that already possessed a nucleus. It was a good marriage. The DNA in the bacteria evolved into mitochondria, little powerhouses that help convert oxygen into energy in every cell of your body. The DNA in the single-celled organism went on doing what DNA does: creating proteins and replicating itself. Everybody was happy.

However, mitochondria had a pre-nup that many Hollywood actors would envy. In the case of a cell split, a mitochondrion get to keep all its DNA and pass it on, unchanged, to the egg that will become the next generation. Sperm gets almost no mitochondria, and what little it does have is shed with its tail. Thus, all your mitochondrial DNA (mtDNA) came from your mother, who got it from her mother, all the way back to the common matrilineal ancestor, “African Eve,” approximately 6,000 generations ago. Humans can be grouped into “haplogroups,” clusters of people defined by their differences in mtDNA.

When I discovered all this, I was fascinated. Coupled with a higher mutation rate relative to nuclear DNA, the inheritance of unchanged mtDNA makes it possible to trace ancestry of a person, or groups of people, through the restless migrations that characterize our species. All sorts of anomalies abound: Why does the Korean sequence turn up regularly in Norway? How did that family on the Russian steppes acquire the mtDNA signature of a Polynesian? And what does any of this have to do with science fiction?

A concept is not a story. To turn my enchantment with mitochondrial DNA into something with the possibility of enchanting anyone else, I needed characters, plot, conflict, setting. This stalled the entire project for a year, while I pondered. Pondering is what writers do best, since it has the virtue of feeling productive without the pain of actually confronting a keyboard. Eventually, however, pondering must end and writing begin. For SF, aliens are often a good place to start.

In Yesterday’s Kin, aliens arrive on Earth. They willingly subject themselves to being sampled and probed: tissue, blood, organs, DNA. The results are conclusive: These aliens are human. Their particular migration reached farther, and deeper into the past, than any other—but how? When? And why are they returning now? The answers to these questions formed my plot.

My protagonist was created from twin desires. First, I wanted to portray contemporary biological science as it is actually done: with sophisticated equipment, as part of an international conversation, with career-impacting mistakes and triumphant corrections. Too often, the “science” in SF is of the cloning-in-a-basement-by-a-mad-scientist type, or else gibberish hand-waving (“If we hook up the actofrabble cycle to the Hartford drive, we can create galaxy-spanning life insurance!”). I have enormous respect for science and scientists (all right, I’m a science groupie) and I wanted to show biological discoveries being made under pressure, with the inevitable competition as well as the teamwork, as realistically as I could.

Second, I wanted a female scientist who (1) was not young, (2) did not tote a blaster, and (3) had a family. Humanity comes, of necessity, in families, at least in the beginning of lives, but from much science fiction, you’d never know this. Protagonists whiz around interstellar space unencumbered by so much as memories of anybody back home, much less the aching concern that most parents never lose for even their grown children. Dr. Marianne Jenner, evolutionary biologist, has three grown children, all of whom carry around the marks and scars of their upbringing. Just like (I fervently hope) real people.

Yesterday’s Kin was absorbing to write. During my research, which was extensive because I am not a scientist, I discovered enough material for several books in several genres. The United Kingdom, for instance, has recently approved the insertion of mtDNA from a donor egg into an egg whose own mtDNA carries inherited mitochondrial diseases. The donor mtDNA replaces the defective mtDNA. When the egg is fertilized in vitro, the resulting child will actually carry DNA from three different people. Legal thriller, anyone? Family saga? Star-crossed romance?  (“We can’t marry; you’re my one-third sister.”) However, SF is what I write, and with Yesterday’s Kin, Marianne Jenner’s story is not finished.

Nor are the surprises written in human mtDNA.  Your mitochondria supply you with more than physiological energy.  They can reveal our shared past and the connections that, to a large extent, make us who we are.