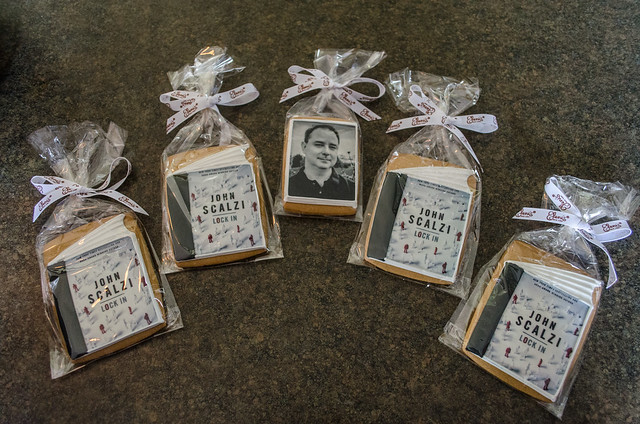 Further proof that the folks at Tor are excellent people with whom I am happy to work: The arrival this morning of a box of “Lock In” cookies, offered up in celebration of the book hitting the bestseller lists. I like that they timed the cookie arrival for when they knew I was going to be home. I also like how they have my photo on some of the cookies. Now when someone bites my head off it won’t have to be an entirely sinister thing.

Vaguely related, not too long ago I noted with some amusement a perennial detractor of mine blathering ignorantly, as he nearly always does on any subject relating to me, about how it didn’t seem to him that Lock In was doing particularly well; this was almost immediately before the book hit the NYT Hardcover list and was Bookscan’s #1 top-selling front list science fiction novel. I considered sending him one of these cookies, so he could eat his words. But then I thought that giving a cookie to an asshole was a backwards way of doing things, at least from the point of view of the cookie. So, no cookies for him. He’ll just have to bask in the infinite pleasure of being wrong, so very wrong, yet again. He’s used to that, in any event.

But if I could, I would share these cookies with all the folks who have bought the book, or come out to see me on this tour. You have made this book a success (so far!) and my appreciation for you knows few bounds. Thank you again, folks. Life is good. 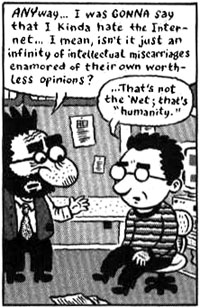 Sixteen years ago today I set down at my computer and wrote what would be the very first entry in what I was then calling an online column, which I labeled “Whatever”; and look, here I am today, roughly 10,000 or so entries later, doing the same thing. Time passes; people change; children get older. And yet, here I am, at it still.

And the sixteenth anniversary comes at an interesting time, both for the site and for me. I very recently wrote about how my online center of gravity has shifted; Whatever is my home online, but I spend a lot of time out of the home, and particularly on Twitter. This mirrors me in the real world as well: I’m writing this piece from home, but only because I’m on a small break from a monster book tour that started August 26, when Lock In came out, and will continue through September 20, when I take the last plane I have to take to come home (and even this small break isn’t really a break, since I have an event this very afternoon at 2, at my local bookseller, Jay and Mary’s Book Center). Next month, I’m a week away at New York ComicCon and then Books on the Banks in Cincinnati. And there are reasons to believe that next year will see me away from home even more than I am here in 2014.

These are not bad things — I’m out of the house a lot because my writing career is doing very well, and Twitter is a ton of fun, which is why I’m there a lot — but they are things that affect this site. Add to that the general slow migration away from blogs toward other social media, which is occuring in tandem with the Internet generally changing from something you read during a long sit in front of a computer to a thing you glance at from a phone while you’re on your way to (or wasting time during) some other thing, and what it means is that for the first time in a very long time, I wonder how Whatever fits into the world, and fits into my life.

At the moment, I don’t have any answers to any of that, other than: I guess we will find out. I don’t have plans to stop writing Whatever, that is certain — now as much as ever it’s a release valve for me, and a place where I go to air thoughts that I want to express, on whatever topic I’m thinking about today. And it’s still fun for me, and I think interesting for people who stop by, whether they’re longtime readers or people who funnel in because they’re referred by a link from Twitter/Facebook/Google+/Tumblr/etc. So this isn’t me trying to break the news gently that Whatever is going away. It’s not. I suspect it’ll be here for a long time yet (assuming that I, myself, will be here for a long time yet).

It is me recognizing, however, that as in all things, time moves on, and I move along with it. I’m curious to see what that means for Whatever, and how what’s here will reflect the changes in the online world and in my world. It’s an exciting time in my life, for reasons you know already and for some reasons you don’t — all good things, I’m happy to say, for the moment at least, and I hope that this particular moment lasts. I expect at least some of that excitement will be reflected here; that I will, as I always have, share at least a little of my thoughts at these moments in time. Which is, of course, what Whatever has always been.

So, things change and yet in some ways they will also stay the same. Here’s to another year of Whatever, and to all of you who come by to read it. Thank you. Let’s find out what happens next, shall we.

(Comments are open on this entry — because I’m home for two days! Wheeee!)