Last night I wrote the following on the Twitters, regarding the Lock In TV deal, and the fact that it means I have three TV development deals at one time:

I'm not gonna lie to you, folks: Now that the news is out, I'm kind of quietly freaking out over here.

By "quietly freaking out" I mean I'm NOT running up and down the halls of this hotel, kermit-flailing my arms and screaming like a fool.

I'm also not saying I WON'T, at some point, Kermit flail all over the place. Maybe at tomorrow's event at Gibson's in Concord, NH at 7pm?

So tonight at the Concord event, I was asked if I was going to do the Kermit Flail. And so I did. Here it is.

A thing of beauty, it is.

A slightly longer version, with added context, is available here.

Credit for both to BoffoYuxDudes. 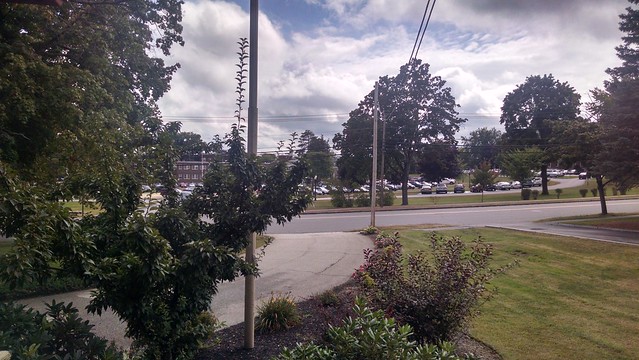 The hotel is very bed and breakfasty. I’m on the ground floor, which will make it easy if I have to evacuate in case of fire. I don not intend to set any fires. I feel it’s important to make that point clear.

Tonight: I do my thing at 7pm at Gibson’s Bookstore, here in Concord, NH. I have never been to Concord before so I am very much looking forward to the event and to seeing folks here. Please, as always, come and bring along everyone you have ever met. It will be totally worth your time. Promise!

And here it is:

Yes, I have three TV shows in development at the moment, which is very cool and wonderful for me and which means I’m having a totally giggly moment over here.

Hey, remember that there was supposed to be an Old Man’s War movie? That was optioned for five years and never made it to the big screen. Same thing could happen with Old Man’s War, the TV series. Or Redshirts, the TV series. Or Lock In, the TV series. Lots of things are optioned and put into development, rather somewhat fewer of them get the greenlight to go to screen. Even shows that get greenlit can be pulled before they air. And then once a show gets on the air, it may not survive past the first season, or even the first few episodes. In film and television, nothing is ever assured.

So, it’s possible that everything I have in development makes it to series. On each of these potential series, I’m working with super smart people, all of whom have sold things in film and TV before, and each of whom has been successful in LA in a way I find tremendously encouraging — it’s why I decided to let them adapt what I’m writing. But is it probable that everything I have in development makes it onto the screen? Well. We will see. It is a long journey, full of detours, potholes and opportunities to run off the road and over a cliff. Not just for me but for anyone.

This is just my way of reminding everyone that the very good news I got for Lock In is the start of a process, not an assurance of a series and success. The same goes for OMW and Redshirts. Everyone involved, including me, are working hard to make it happen. And at the very least I personally am having a fair amount of fun as it goes along.

So let’s see what happens next.

(comments open for a couple of days) 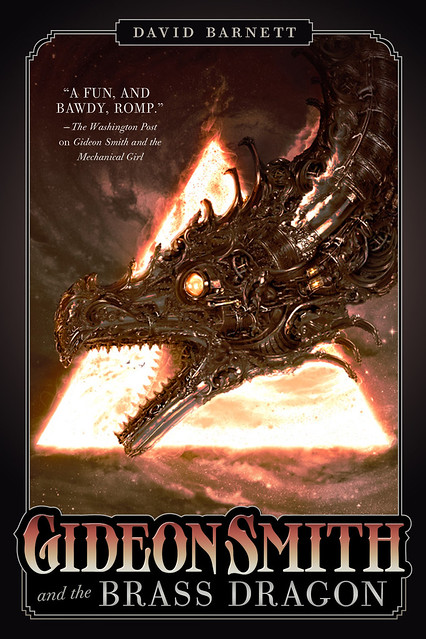 There’s the saying that “Freedom isn’t free” — but how to express that concept in a way that makes it more than just a bumper sticker platitude, and fold in some steampunk aweseomeness to boot? With Gideon Smith and the Brass Dragon, author David Barnett may have just the ticket. Here he is to explain how it all comes together.

At least, that’s what it sounds like to The Nameless. He isn’t really called The Nameless, of course, but he can’t remember his name. As he tells one character in Gideon Smith and the Brass Dragon:

“They call me many things. The Indians call me Spirit, in more ways than I can remember. The witches of New Orleans like to call me Fantôme. The Mormons in New Jerusalem think I’m Satan, and the civilized folk of New York don’t believe in me at all!”

The Nameless is a weird mash-up of Natty Bumpo from Last of the Mohicans and Clint Eastwood’s Man With No Name, criss-crossing the America of 1890 in search for… well, he doesn’t really know. All he knows for sure is that he woke up on April 18, 1775 with no idea who he was. All he was really sure about was that America was screaming, and somehow he had to put that right.

April 18, 1775 is an important date in the calendar in Gideon Smith’s world. It’s when the British put down a nascent American rebellion and ensured that the country – or at least most of the Eastern seaboard – remained in British control. The Spanish still hold much of what we know as Mexico – New Spain, to them. But their constant war with the French back in Europe means their tentative forays north of the border have had to be scaled back, to the point where they didn’t put up much of a fight in 1868 when a breakaway Japanese faction fetched up in San Francisco, took over and rechristened it Nyu Edo, capital of the newly-established Californian Meiji.

There are other factions and independent settlements in North America, of course – the French nominally hold Louisiana, there’s a Free Florida which is a safe haven for runaway slaves from the Confederacy, and Texas is dotted with fiefdoms run by mostly tyrannical former British governors who decided they were too far away from New York and Boston – and a world away from London – to pay too much heed to what they wanted.

This fractured America is, I suppose, one of the big ideas in this, the second Gideon Smith novel. But though he’s not often on-stage, The Nameless is another big idea, linked closely to this. America, he feels, should not be this patchwork of territories controlled by proxy from far away. And that sort of gave rise to what’s the real Big Idea in Gideon Smith and the Mechanical Girl – the one that we’re all shackled to something, even if we don’t know it. And that freedom can be achieved, though often at a price.

The British governors in New York and Boston are chained to the whims and fancies of London, thousands of miles away. They can barely keep their cities running with the taxes that have to be paid back to Britain, and they certainly can’t expand into the wide open territories to points west without the resources they need. The Governor of New York, Edward Lyle, knows that his city is in thrall to the coal that keeps the lights on and the traffic moving, and he’ll do whatever it takes to keep that happening.

Haruki Serizawa is a scientist working on a top secret project for the Californian Meiji. He and his wife Akiko hoped America would be a new world for them and their daughter Michi, but he is frustrated that the new settlement cannot fully cut its ties to the old country.

Inez Batiste Palomo is the daughter of the Spanish governor of Uvalde, a border town all but forgotten by Ciudad Cortes (Mexico City, to you and me). Her father cleaves tightly to tradition and expects her to do the same, but she’s a modern woman in a world that’s changing fast.

And Gideon Smith is the boy from nowhere, the fisherman appointed to be the Hero of the Empire by Queen Victoria herself. Gideon is shackled to Victorian mores which despise the different, which make it difficult to be anything other than rich, white and male. Yet here he is, in love with a mechanical girl. His society, the one that made his dreams come true, just doesn’t hold with the freedom to love who he wants.

And, I suppose, the book, the whole Gideon Smith series, in fact, is perhaps my own attempt to break free of the constraints – real or perceived – that some feel the “steampunk” genre imposes. I wanted to write a working class hero who didn’t have a double-barrelled name, one who dragged himself up by his boot-straps and demanded the world take him on his merits. One who – once he knows how the world works – has severe misgivings about it. I wanted to create a steampunk world where diversity was celebrated, differences discussed, and expectations challenged, if not overturned.

I’m not sure, as a white male with a roof over his head and a steady job, whether I’ve succeeded in that. But as the characters in Gideon Smith and the Brass Dragon find out to varying degrees, freedom rarely comes without some effort.