Was informed I have ruined science fiction by being all social justice warrior-y. Responded by say BWA HA HA YES I DID SUCK ON IT LOSERS.

AND I AM ABOUT TO RUIN TELEVISION TOO. AND VIDEO GAMES. THERE WILL BE NOTHING BUT RUIN IN MY WAKE BWA HA HA HA HAH HA

Oh, and then I muted them, so their subsequent pathetic mewlings would go unseen by me. CRY IN THE DARKNESS, LITTLE MANLINGS.

@scalzi AND YOU WILL KNOW THEM BY THE TRAIL OF MRAS

THE VERIFIED MIRACLE OF SCALZI: Despite having sold no books ever, I have STILL managed to ruin science fiction. I MUST BE A WIZARD.

BEHOLD ONE OF THE GLITTER BOOTS WITH WHICH I HAVE STOMPED THE MANLY MAN WRITERS DESPITE NOT SELLING ANY BOOKS EVER pic.twitter.com/nOWiGWprIR

Seriously though I would totally fucking wear those glitter combat books. MAYBE THE NEXT TIME I RUIN THE HUGOS BY BEING NOMINATED FOR ONE

@scalzi [P] I bought a book by @scalzi; my penis inverted and I got a job as a doormat outside of a Curves. Looking forward to the sequel.

I bought a book by @scalzi; every man within five feet of me now spontaneously menstruates

I read a book by @scalzi once, and my penis literally fell off. I've regrown it since, but now it's all glittery.

If I read a @scalzi book during winter, snow turns to glitter.

I read a @scalzi book, and now I find myself acting as if women and minorities are people! O.o

@scalzi Excellent work, gamma-slave. I shall petition the Empress of Feminism to increase your rations of vegan nutri-biscuits.

In short, if you're a dudebro who thinks I've ruined science fiction, I am DELIGHTED to have ruined it for you. RUN BEFORE MY GLITTER, BOYS

P.S.: Need tips on how to clean up glitter. This shit is EVERYWHERE, man.

While I was on tour with Lock In, I turned off the comments here at Whatever, opening them for Big Idea posts and the occasional post when I was able to spend a little time babysitting the thread. Among other things I was curious to see what, if any, effect turning the comment off would have on visits to the site.

The answer seems to be not a whole lot. Traffic to Whatever overall was down in the last four weeks, but I expected it to be down, because it always goes down when I’m on book tour — I’m not posting as much and what I do post tends to be short bits about where I am on tour. Turning off the comments doesn’t really appear to have dropped viewership lower, as a percentage, than any other time I’ve been tour — or if it had it was negligible enough that I don’t see it.

In one sense this is not too terribly surprising. As I’ve noted before, Whatever gets thousands of visits and visitors daily, but only (generally) a few dozen commentors on any given day. As a percentage, the commenting class here — as it is pretty much everywhere — is small compared to the overall readership. The inability to comment is not a huge thing when you don’t comment at all. Likewise, I suspect that most of the commenters were cool with the comments being off for a bit if I couldn’t sit on them like I usually do. So overall: Not a huge surprise, although it’s still interesting to me.

It doesn’t mean that I’ll be keeping comments off, mind you. The commenting class here may be small relative to overall readership, but it is of high quality, if I may say so myself, and for those folks to who do read for the comments (and I’m one of them), I would hate to deprive them of that enjoyment. So comments are back on. Comment away, you crazy kids!

That said, I am going to make one major change: After 14 days, comments threads will automatically close. I’m doing this for two reasons. One, in nearly all cases, the conversation in any comment thread is done two weeks out, and the only non-spam comments the comment threads accrue are from people who generally don’t have anything new or useful to say — indeed, late hits in my experience are generally some form of trolling. They won’t be missed.

Two, I turned comments back on here and less than a half hour later had more than 200 fresh comments in my spam queue. The good news is that WordPress’ spam catcher caught nearly all of them, but on the other hand, it was a reminder that I get a couple thousand attempted spam messages a day here. The site has close to nine thousand entries, many of which still have (had) open comment threads. If you’re a spammer, that’s a lot of shots on goal. Limiting the spam opportunities to just a few dozen active threads will make my site maintenance a lot easier, and these days I don’t have as much time to moderate as I used to.

So if you have anything to say on a comment thread, say it in the first couple of weeks, or forever hold your peace, at least here on the blog.

Here’s another change I’m going to make. From time to time while I was traveling (or otherwise busy), I’ve wanted to comment on some contentious topic or another but held off because I simply didn’t have the time to sit on the comment thread. As a result, and because I am rather more busy with travel and work these days than I was before, I find myself not writing up those pieces. I think Whatever’s range of topics has suffered a bit because of it recently.

So, here’s the plan: If I find I want to write something on a contentious topic but I don’t have time to moderate a comment thread, I’m just gonna write the thing and not turn on comments, or wait to turn on the comments until I have time to moderate. Simple! So simple, in fact, that I’m not entirely sure why I didn’t think about it before (In fact, there have been times when I’ve done that, but it never occured to be to think to myself “hey, you know, this is a thing you could do whenever you needed to.” Because I’m an idiot, you see).

When I have the comments off (or delayed), how will you comment? Well, of course, there is Twitter and Facebook and your own blogs and even (gasp!) email, which is how people used to comment to me before comments were on here at all. Who knows, it may even lead to an increase in hate mail, which, to be honest, I hardly get anymore (this is not an actual complaint).

In any event, that’s where I am on comments. 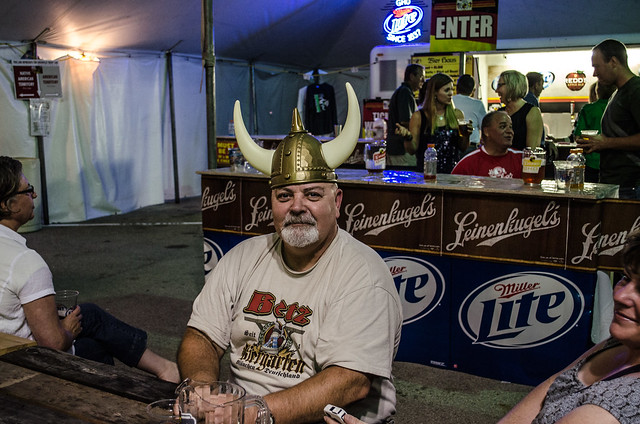 Fort Loramie, a town just up the road from me, celebrates its German Heritage Days (on pretty much the same days as traditional Oktoberfest begins, incidentally) with a big tent, ruben bites (think a ruben sandwich, in nugget form), and of course, lots of beer. We went last night, and I took photos. If you’re interested, here’s the photo set. Click on any photo there for a bigger version of the photo.

A quick post for a couple of technical matters.

One, as I have returned from the tour, full commenting has returned to Whatever: Comments are turned on by default, and all posts whose comment threads are not otherwise turned off are now open. I’ll have more thoughts a bit later on what I learned about having the comments off while I toured.

Two, I’ve turned off my email autoresponder, so if you’ve been holding off to send me email, go ahead and do it. Also, if you sent me e-mail anytime in the last month and wanted a response and didn’t get it (because I wasn’t responding to most email while on tour), go ahead and resend (Note: you don’t have to do this for Big Idea for October and November: I’ll be getting to those all by the end of the month).