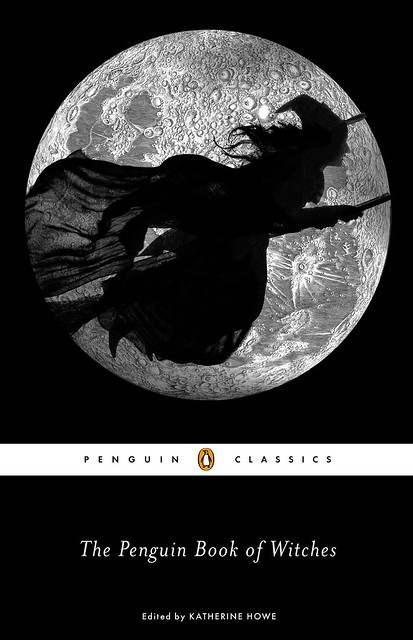 Aside from anything else, I am just glad there is now, in this world, a book with the title The Penguin Book of Witches, because, really, how cool is that. But editor Katherine Howe has made sure that there is more to the book than just a great title — it’s a book with a point. What’s the point? Howe is here to tell you.

I think we can all agree that witches are a problem.

Okay, you’re right. Maybe they’re not a problem anymore. Perhaps you think witches are awesome. Perhaps you know a witch or two yourself. Perhaps you are a witch yourself? But if witches today wear their pointy hats with impunity and walk amongst us twirling their wands and trailing cats in their wake in broad daylight, it’s safe to say that it wasn’t always so. Until quite recently, witchcraft was a serious problem indeed. Serious enough that it was against the law. Serious enough that it was punishable by death.

I’ve written about witches for a while, usually in novels like The Physick Book of Deliverance Dane and Conversion, which came out this past summer. And the fascinating problem with witches is that while we can all agree on what a witch looks like, it’s trickier to figure out where she, as a cultural idea, came from. How do we know what witches do? What makes witches so threatening? Why were we so scared of witches that for hundreds of years, we were willing to hang them by the neck until death?

Generally speaking, a “witch” in the early modern period (so around 1400 to around 1700, depending on who you ask) was a person—most often a woman—who was thought to have traded her soul to the Devil in exchange for certain special privileges. She might have the ability to make cattle fall sick, or maybe she could predict when someone was going to die. She might be able to fly through the night seated on a broomstick, or she might have a special imp “familiar”—like a pet—who would go and do her bidding. Maybe she could even send out her spirit from her body and wreak havoc on her neighbors, or she could make her spirit assume the form of her familiar, stalking about in the night in the shape of a cat. She was threatening, on the one hand, because of this special, volatile power she might wield against the people around her. Even more than that, she was threatening because she was an example of an individual person claiming power that belonged more rightfully with God (or, practically speaking, with the power structures of the church or the king. Kings hate it when you try to have more power than they do).

Some early modern skeptics, like Reginald Scot, wondered if we were missing something in this whole “witch” situation. If witches were so powerful, they asked, why was it that most people tried as witches were actually pretty wretched and miserable? They were usually poor, often destitute, sometimes unstable or argumentative. On average, the typical accused and executed witch was a woman at middle age—from her 40s to her 60s—who was on the outs with her society in one way or another, usually economically, but maybe personality-wise as well. She was a pain. She was irritating. She made people uncomfortable. She was always begging for something. She was a problem, and she needed to be gotten rid of.

The first person accused as a witch during the Salem episode was a classic example of this. Tituba Indian was a slave in the household of Samuel Parris, the minister in Salem Village. She had come to Salem with him after being enslaved on his failed plantation in Barbados. Tituba was accused by Betty, Samuel’s daughter, of trading her soul to the Devil and using the special powers he granted her to send Betty into “fits.” Tituba confessed, though some historians think that Parris beat the confession out of her, and went on to pass the blame to other women in the community who were vulnerable in similar ways: Sarah Good, who was destitute and begged from door to door, and Sarah Osburn, who had married her handyman and stopped going to church. The idea of “witchcraft” in the colonial period had a lot to do with regulating women, forcing them to comply with cultural ideas of how they were supposed to behave.

The pointy-hat image of witchcraft has dominated popular culture for such a long time that it can be difficult to tell where the idea of witchcraft originally came from. That’s where The Penguin Book of Witches comes in. The Penguin Book of Witches wants to bring history back into the picture. It’s a collection of primary sources—that is, actual historical documents—about witchcraft in early modern England and English North America, from the 1500s until the 1700s. It includes not only theological arguments, like Reginald Scot (the skeptic) and King James I (who wrote a whole book on demonology), but also trial transcripts of real-life women accused and executed as witches. Reading these trial transcripts is like watching an episode of Law and Order, made all the more chilling by the fact that everything in these records really happened.

It’s tempting to believe that after nineteen people were hanged at Salem by the state for a crime we now believe to be imaginary, our culture suddenly awoke in a fit of reason and stopped believing in witchcraft. But that’s not what happened. Witchcraft stopped being a crime after 1735, but it continued to lurk in our cultural practices and memory long after it vanished from the books. That’s why The Penguin Book of Witches doesn’t stop with Salem, looking at the various ways that witchcraft persisted as an idea, an anxiety, and even a practice until the dawn of the nineteenth century.

Or, perhaps even the dawn of the twenty-first?