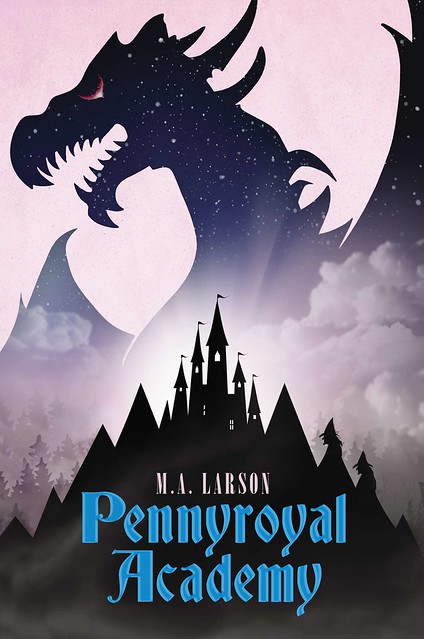 The word “princess” has certain connotations in our culture, not all of them that great. Author M.A. Larson is here to talk about some of them, and how they relate to his new novel, Pennyroyal Academy.

I didn’t have a daughter yet when I started on the long path from idea to publication. I didn’t even really have a Big Idea. I was a film and television writer with what was, in hindsight, a pretty Small Idea.

I went around to some of the studios pitching a cartoon series called “Princess Boot Camp.” It was a straightforward parody of princess culture where I intended to juxtapose frilly pink princesses with hardcore military training. I was banking hard on “princess fatigue” to help me sell the show and build an audience. Now that I think about it, “Princess Fatigues” might have been a pretty good title. But I digress…

The show was optioned and developed, but eventually stalled. Still, I wasn’t quite ready to give up on the concept. A friend suggested I try writing it as a book. I was intrigued by the idea, so I decided to go back to the original source material – the fairy tales of the Brothers Grimm – to do a little princess research. What I discovered led me to something much more interesting, and more profound, than I had anticipated.

In the story “The Six Swans,” the princess character has such fierce love and compassion for her brothers that she vows not to speak for six years in an attempt to break the curse that has turned them to swans, and even as she is being led up the gallows to be hung, her devotion to them is so great that she doesn’t utter a word. In another story, “The Golden Bird,” a princess is threatened with death, yet bravely risks her life to expose her evil brothers-in-law to the king. Yes, the princess Briar Rose is described as beautiful, but then she is said to be gentle, virtuous, and clever. Snow-White is so kindhearted that seven burly mineworkers and all the creatures of the forest come to mourn at her glass coffin when she is killed. The princess in “The Two Brothers” is faster than any man or woman in the kingdom. And so on and so forth.

These princesses were being described as clever, brave, athletic, and kind. While it wasn’t true in all the stories (there are some nasty princesses in Grimm’s Fairy Tales, too) on the whole they were far more multi-faceted and interesting than the vapid pinkness I thought of when I heard the word “princess.” In modern usage, the P word often seemed to describe a girl who was proud of her laziness, proud to be spoiled and entitled. “Princess,” to me, was just an empty word stitched on sweatpants and emblazoned in sequins on the sides of purses. It did not describe the girls I had been reading about.

And that’s when my Big Idea began to emerge. Could I reclaim the word “princess” from the Paris Hiltons of the world? Could I redefine it so that it meant, to my readers, what it had meant to the Brothers Grimm?

Armed with my new Big Idea, I realized I would need to scrap the entire idea of doing a parody. The princesses of Grimm’s Fairy Tales weren’t to be ridiculed; they were to be admired. I began to strip away the spoofiness, and what emerged was a story far more sincere than the one I had started with.

When my characters enlisted at Pennyroyal Academy, they wouldn’t be there as a tool for me to use to skewer princess culture. These girls would study the great princesses of the past, look to them as examples of how to live in harmony with the world, and learn to use the innate kindness and goodness in the traditional definition of a princess to quite literally fight against the forces of cruelty and evil. Graduates of the Academy wouldn’t sit in towers and wait to be rescued. They would fight their way out using their virtue as a weapon. My goal was to re-establish the princess as a paragon of decency and kindness, and I decided to do that by having my princesses battle witches.

Once I had that central conflict – princesses as the only force in the world capable of defending against witches – the only thing left was the hardest thing: sitting down in a chair and pushing keys. I infused my story with traditional fairy tales as much as I could. I aged it up and made it more sophisticated, just like the princesses I was writing about. With each chapter I added to the stack, I always kept my Big Idea in mind. And the next thing I knew I had a manuscript, and then I sold it, and now here I am writing this. And it’s all thanks to that dreaded P word.

I do have a daughter now, and I’m happy she didn’t see the original version of this project. Back then, I viewed princesses as pink and helpless and unworthy. But now that I’ve written Pennyroyal Academy, my definition of what a princess is has changed dramatically. A princess is courageous. She is compassionate. She is kind. She is disciplined. And if my daughter told me she wanted to be a princess when she grew up, well, nothing would make me happier.