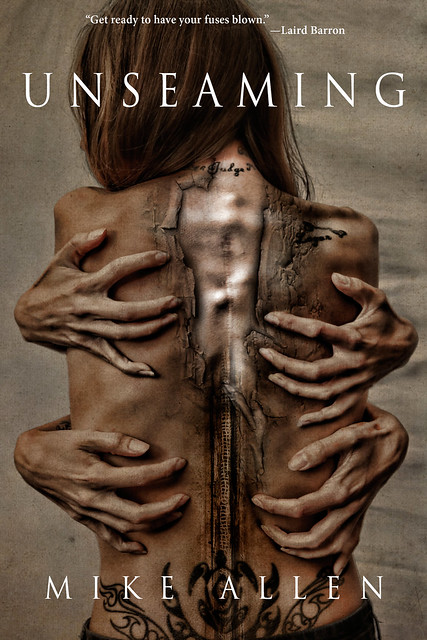 It’s not just words that inspire writers. Mike Allen tells us about the things, more ocular than verbal, that got him going, in this Big Idea piece about his short story collection, Unseaming.

It’s all about the visuals, baby.

I am not and will never be the sort of writer who generates a story because my characters (supposedly) talk to me. I have friends who swear by this method of composition, but frankly, I can’t even fathom how that would work. My stories all come from images, often moving images, like scenes snipped out of context from movies, that stun me with their immediacy. I’m compelled to imagine their history, their implications. And as you might guess from the cover art for my collection, the imagery I’m drawn to tends to derive from the dark side.

Sometimes the inspiring snapshots can simply be things I notice in life, though usually such things must be unusual enough to demand unusual context. Noticing a single shoe left beside the road might cause little more than a momentary mental question mark, but noticing a whole series of forlorn singleton roadside shoes over several days’ time led me to wonder what happened to the missing shoes, and to the humans who owned these permanently separated pairs — which begat my story “Gutter.”

Here’s another real-life snapshot. The first time my wife Anita and I visited the Virginia Museum of Fine Arts in Richmond, a trick of reflected light caught my eye and my imagination — seen from a particular angle, a lighted stained glass church window appeared to be hovering disembodied about twenty feet above the atrium floor. I imagined seeing the same thing in broad daylight in a empty field — and thus arrived my story “The Lead Between the Panes.”

Story-fodder images can come from dreams. When I was a toddler I had a memorable nightmare (at least I assume it was a nightmare, I remember it as if it actually happened) of my beloved, very, very, long-armed Humpty Dumpty doll coming to life in my crib and trying to strangle me. Each time I tossed him out, he righted on all fours and climbed right back in. I don’t remember how the dream ended, but what could I have called my attempt to create a new ending besides “Humpty”?

Music can make me dream up scenes, and as I’m an unabashed, unrepentant, hardcore metalhead (in fact, I’m jamming to Judas Priest as I write this) my music fugues tend to be delightfully twisted. My ultra-apocalyptic story “Let There Be Darkness” is basically my mental music video for the Slayer song “South of Heaven” transcribed into words.

Occasionally these images pop into my head out of nowhere. A few years ago, I tagged along with Anita to a sprawling fabric store set up inside an old schoolhouse. While she shopped, I sat down beside a curious artifact — an RC Cola machine, laid on its face, with all its mechanical guts removed. The owners had filled the shell of this machine almost to the brim with buttons; I could sink my arm into them past the elbow. As I perched there playing with the shiny buttons, a vision came to me — I imagined pulling my arm out to discover that the buttons had attached themselves, and wondered what would happen if I then started to unbutton my own skin. As this visual took hold of me, others rapidly followed, and about 90% of the plot of my Nebula-nominated story “The Button Bin” exploded into my brain right then and there.

There can also be combinations of the above. Even though I had not originally imagined “The Button Bin” as the sort of tale that required a second chapter, I ended up trying to come up with one. (This was a result of an exchange with a movie producer which ultimately lead nowhere in particular, but gave me incentive to revisit the story.) Still, I had no idea how a follow-up would work.

Then, one day, I happened to be listening to “Lux Aeterna.” You’ve heard this composition: it’s the main theme to the movie “Requiem for a Dream,” subsequently repurposed to great effect in the movie trailer for “The Lord of the Rings: The Two Towers.” I had listened to this piece before without receiving idea encounters of the story kind. But this time, out of the blue, a scene came to me of a man unraveling. And I don’t mean having a mental breakdown. His skin and flesh were spinning off his body the way a broken window shade spins. By the way, this wasn’t producing the burst of blood you might expect. The layers twisting away just revealed more layers, and more, and more, of someone or something clearly human no longer. And from this comforting tableau came my first full-blown novella, “The Quiltmaker,” which is indeed the sequel to “Button Bin.”

Once this sequel existed, the impulse to have the stories paired together in a book naturally followed. Dark fantasy and horror collections have loomed big in my literary life through the years — Clive Barker’s The Books of Blood, Harlan Ellison’s Deathbird Stories, Thomas Ligotti’s Grimscribe: His Life and Works, Laird Barron’s The Imago Sequence, Livia Llewellyn’s Engines of Desire: Tales of Love & Other Horrors. I’ve long had a vague notion of putting out a horror collection of my own, but that notion didn’t become a mission until after “Quiltmaker.”

But there’s another significant way in which imagery generated this book. See, it was originally titled “The Button Bin and Other Horrors,” or variations thereof. Then I got my first look at Danielle Tunstall’s astonishing cover art, and I knew it was perfect, perfect, perfect. And I also knew the original title would never work with that art.

So here’s where my background as a speculative poet came in handy. I started experimenting with one word titles that would fit both my stories and Danielle’s art, until I finally arrived at: “Unseaming? Is that even a word?”

And I checked, and lo and behold, it’s not one in common usage, but a word it is, used most famously by William Shakespeare himself, in just about the same sense that I mean it. Here’s the lines from “Macbeth”:

“Till he unseam’d him from the nave to th’ chaps,

and fix’d his head upon our battlements.”

It’s all about the visuals, baby.

← Who Is That Masked Man?
I’m in Cincinnati on Saturday for Books by the Banks →