Yes, if you’re in or around the University of Chicago — my alma mater — or, heck, just in the city of Chicago in general, come on down and see me. This is the very last official stop of the Lock In tour, and after this I have no more scheduled public appearances until 2015. So if you want to see me this year, this is the time and the place.

Here are all the details. See you there!

My pal (and musician and songwriter) Mark Nevin wrote a song called “Kiteflyer’s Hill” for Eddi Reader, with whom he had been in the band Fairground Attraction, for her solo album Angels and Electricity. He’s recently also done a version of it for his own solo album Beautiful Guitars, which will be out in the next week or so. I have the album, and it’s well worth getting if you’re a fan of genuinely lovely songwriting, and why wouldn’t you be.

“Kiteflyer’s Hill” is simply one of my favorite songs ever — it’s beautiful and wistful and gorgeous and captures what it’s like to remember a love of long ago — and I thought it would be fun to share the song done both by Mark and by Eddi, as a way to contrast how two takes of the same song can have an effect on the feel of the thing. I like them both: Mark’s is low-key, comfortable and lived-in, while Eddi’s soars up like, well, a kite, as it would with her matchless set of pipes. I hope you enjoy both.

And now Eddi’s (note: video is slightly out of sync): 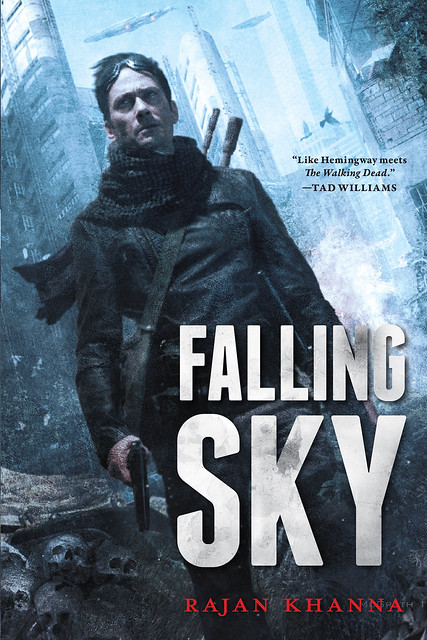 There are many interesting things about Rajan Khanna’s debut novel Falling Sky, but the one that pings my radar is that involves dirigibles, and that (of course!) noted dirigiblist Cory Doctorow plays a key role. Read on to find out how it all connects.

Like most novels, Falling Sky began with a sentence. It was a sentence I had written years ago and filed away, like I do with many of my story ideas. It involved a man, floating in a dirigible, afraid to go down to the ground. At the time I didn’t know why he was afraid, or what possibly lurked beneath him. I just knew he had to descend but didn’t want to.

In 2008, when I attended the Clarion West Writers Workshop, I took that sentence with me. I wanted to turn it into a story, but I didn’t know where to take it. It was Paul Park, our first week instructor, who pointed me in the right direction. He said something along the lines of, “It can’t be a fantasy. You don’t want every person in this world in their own balloon.” Up until that moment, I thought I might. But I quickly shifted gears and decided it had to be science fiction and that despite the outlandish premise, I would make it as realistic as possible.

What the man in the dirigible was afraid of became a pandemic, an apocalyptic disease that shattered modern society. A virus so contagious that it kept people isolated, afraid of being exposed or infected. The victims became, essentially, off the rack zombies (though in my defense it was late night/early morning as I was pulling this together and I was reaching for the low hanging fruit).

The man in the dirigible became Ben Gold, my protagonist, an airship pilot and survivor, staying in the air for as long as he could until his needs, primarily his hunger, sent him down to the ground to risk his life.

I had my initial hook – a post-apocalyptic setting, a rugged anti-hero in an airship, and a host of slavering, zombie-like creatures waiting below him. And while the story needed a lot of work, the setting seemed to generate some interest, enough that several of my classmates, and our instructor for that week, Mary Rosenblum, encouraged me to expand it into a novel. The other overwhelming bit of feedback was to ditch the zombies and make the disease more nuanced. So, when I revised it, instead of being fatal, the disease regressed humans into a savage and bestial state, robbing them of reason, increasing their hunger and aggression.

The third instructor to weigh in on the story was Cory Doctorow, who admirably went back and read the previous week’s stories. He suggested an extra scene where Ben, a lifelong survivor, is confronted with the horrifying lengths some people will go to in order to survive and it calls his choices into question. This would be very useful to me later.

Years went by and the story remained unpublished and a novel was missing from my mental landscape. I kept returning to the idea and bouncing off of it. It just didn’t have any life. Then one day, I found Ben’s voice. I heard it, in my head, in first person, and everything clicked in that moment.

So I had my high concept (post-apocalyptic adventure with airships) and, remembering what Cory helped me realize, I had my central idea — what it means to survive in a post-apocalyptic world. What is the cost of that survival? What does it mean to eke out existence in a shattered world? What lengths would you go to survive? Is there a point where survival by itself isn’t worth it anymore?

In the animal kingdom the basic point of life is often to live long enough to pass your genes on to the next generation. But is that enough for human beings? What about a world where procreation is often a danger because of the risk of infection? And how much of your humanity can you hold onto, and which parts, in the face of losing it to a disease?

Furthermore, is survival really the point at all? If Ben is the face of survival in the book, Miranda, one of the other main characters, is the face of idealism. At the start of the novel, Ben has joined up with Miranda and her group of scientists, helping to provide them with transport and protection. Miranda is trying to find a cure for the virus and believes that one is possible. In fact she risks her life on a regular basis for that purpose. Ben thinks she’s crazy, that her idealism will get her killed (or infected), but in Miranda’s mind, it’s worth it. In her mind risking your life for something more than just survival is the only thing worth doing. Just keeping on is a losing game.

Also, there are airships. Lots and lots of airships. Because airships are cool.