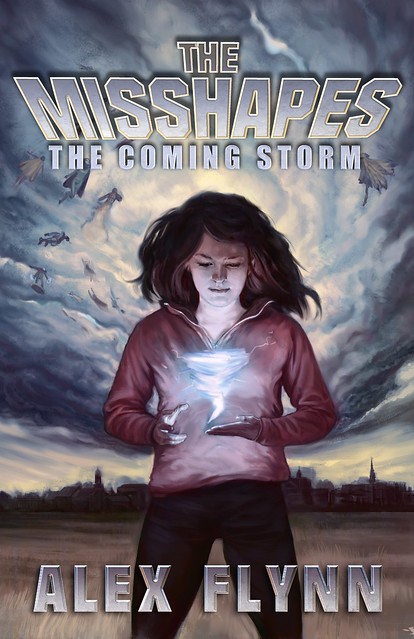 Superheroes are fun to think about, but superheroes are often sort of one-dimensional, cardboard characters. In the real world superheroes would be more complex — and like real human beings possibly not perfect. For the novel Misshapes,  Alex Flynn uses literary x-ray vision to go behind the “super” and look at a world these folks might really live in.

What if superheroes weren’t so super?

I grew up on comic books and movie superheroes who were bastion of justice and goodness. The past decade has seen some darker heroes but they were pretty light in my youth (my Batman did, after all, have nipples on his batsuit and brooded much less). At the same time a lot of my real life heroes when I was younger rarely lived up to these ideals. I was a big Mets fan as a kid and idolized the 86 World Series winning Mets. I still have a Daryl Strawberry signed ball in my childhood bedroom. But after a number of drug busts, assault charges and bleach filled water guns I learned that these weren’t quite the best role models. I feel like a lot of kids who were fans of the NFL after the recent scandals may be experiencing something similar.

When we started the book the great recession had just hit, and the failure of banks and other institutions brought the idea that many of the people in the business community who we once thought of as almost supernatural in their abilities, were not only fallible, but in some cases criminally negligent in their desire to manipulate the system to their own ends. The strains of an increasing class stratified society were starting to show and it was not a pretty sight. People were losing their homes while those responsible got million dollar severance packages and sailed off into their private world of yachts and oceans with no culpability.

When we started writing the book it was just about a girl dealing with rejection from a super school. Like if Harry Potter got kicked out of Hogwarts. We love Harry Potter and other hero stories, but we wanted to hear the tale of the kid that didn’t get in and still made good. But as we built the world, instead of a fantastical utopia with mustache twirling villains, we ended up reconstructing our own world but with people with powers but might not necessarily be super. Based on the way money, power, institutions, business, private schools, celebrity and politics can all interact and corrupt in our world, we started to see how, superheroes wouldn’t necessarily fix these problems, but would likely just get woven into the mix.

We didn’t want to construct a world with rare powers and secret identities, but wanted to build a universe where powers come in degrees, there utility is not based on some standard measure but on how society see their value, and that most of being a “hero” involved the same image management, press, and advertising as being a sports star. In the Misshapes, the town Heroes live in an upscale community above the town and are often involved in less than heroic activities. Also, in a world were real people can fly, instead of action movies, documentaries are really important, although they are more staged—like The Hills or the Kardashians—than true to life.

Also, and the central thrust of the book, there are people who have powers who are not Heroes, because they don’t get into hero academies and society thinks their powers have no value, called Misshapes. This group faces discrimination from society, in part out of resentment of those who have powers, and in part, out of an almost ingrained animosity that resembles racism. We intentionally left the definitions vague because being a Misshape is, like race, gender or class, a socially constructed concept

In our world, and not a clear thing like you often find in fictional works about superheroes. Most villains, usually after they do something wrong, are labeled Misshapes.

Everyone remembers the line from Uncle Ben in Spiderman, oft quoted in freshman philosophy courses “With great power comes great responsibility.” The maxim pre-dates Uncle Ben, and even has biblical antecedents, but we all know if from Ben. The reality is that while the statement is morally accurate, it is not factually accurate. There’s another saying, not often found in comic books, from Lord Acton* “Power corrupts.” This, in turn, is factually true. In the world we find people with power acting with impunity and immorally, even though they should be acting in a more moral fashion.

However, we still hold them up for praise and are shocked when they fall. In part because we want to believe Uncle Ben and want to ignore Lord Acton, instead of learning that we ourselves must be responsible and hold those who wield power accountable. Applying these lessons about the world to a fictional one with superheroes is the big idea of our book.

However, the idea is just the background. On top of that is the great story of one girl learning how powerful she is and how the world she once believed in is not as it appears. Also, there are some pretty damn cool melees with lasers.

*Acton was likely, like Uncle Ben, quoting another source but his succinctly quote is worthy of the attribution. “Power tends to corrupt, and absolute power corrupts absolutely. Great men are almost always bad men.”